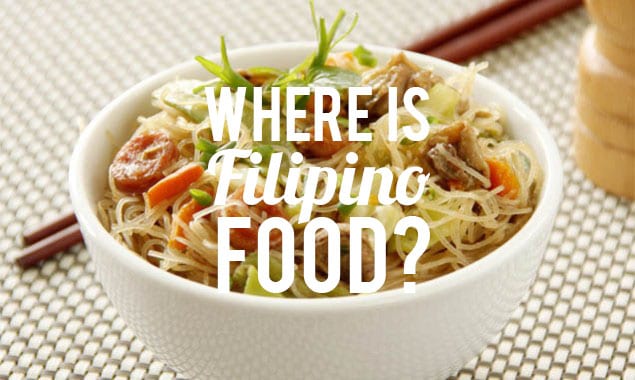 The Secret of Joe’s Pizza in Greenwich Village, NYC

The lack of restaurants isn’t because the food is terrible— Filipino food is wonderfully diverse and inventive. It’s been dubbed in the culinary world as “the next big thing,” but Filipino food largely remains on the outskirts of popular consumption. Maya Dangerfield spent a week eating everything from adobo to sinanglay na tilapia to figure out why.
By Maya Dangerfield 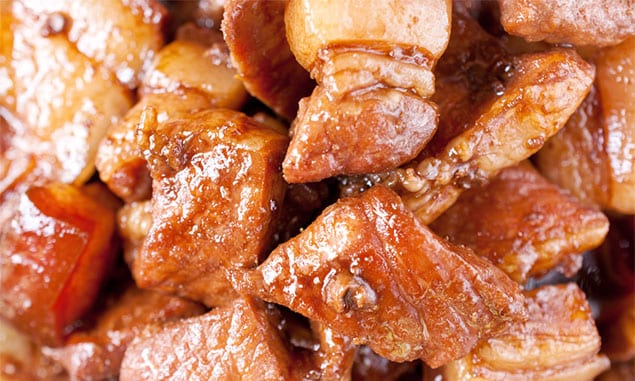 To be fair there’s a lot to learn about Filipino food.  During my first Filipino meal I relied upon the expertise of Kristin, my Filipino-American friend, to patiently explain atchara (unripe pickled papaya), bangoong (a fermented fish paste), and kalamansi (Philippine lime). My ignorance of the cuisine of roughly 110 million people—3.4 million of whom live in the Unites States—is, in part, my own fault. Like the majority of Americans my experience with Southeast Asian cuisine is limited to fare from Thailand, India, and Vietnam.  Overall, American tastes for Asian cuisines are decidedly northern oriented–Chinese and Japanese restaurants boast 43,000 and 9,000 establishments in the United States. But there is a larger, more curious contributor to my ignorance of Filipino food—the limited number of Filipino restaurants in the United States. 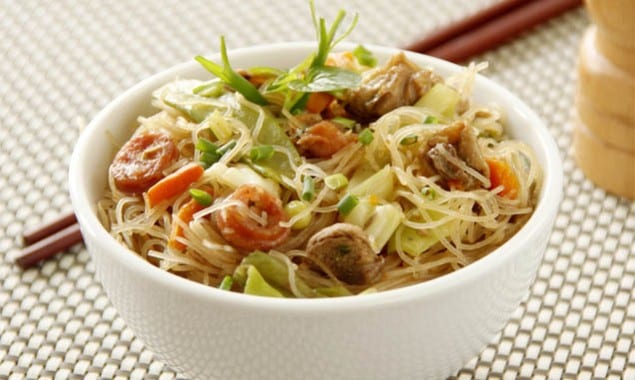 As a novice to Filipino cuisine, I began the assignment with a simple query: what is Filipino food? This apparently was the wrong question to ask because no one entirely knows.  Amanda Andrei, Filipino food scholar, described the cuisine’s identification as ‘contentious’ and a quick study of the Philippines makes it easy to see why. The Philippines is a 7,000 island archipelago that’s home to 97 million people. It’s intensely regional and as Andrei explains, “the national cuisine is adapted by region, celebrated in fiestas, consumed with gusto, and categorized in a myriad of ways that parallel the way Filipinos categorize their own identity.”

There are some characteristics of Filipino cuisine that make it distinct, namely in the mix of indigenous foods (pork, mangos, coconuts, bananas), cooking practices (cooking with vinegar and coconut milk) and a history of culinary exchange with its Malay, Chinese, and Indian neighbors. 334 years of Spanish colonization contributed products like corn, peanuts, and tomatoes, in addition to popular dishes like arroz caldo, llocos empanada, and pan de sal.  Historical studies of Filipino food are typically dogged by questions of authenticity—is it a truly indigenous dish or a foreign imposter? The debates of ‘who had it first’ combined with the regional variation of traditional and popular dishes makes it hard to define what exactly is Filipino food.

Luckily my first foray into Filipino food occurred in a restaurant the New York Times dubbed “an exotic excursion with a soft landing.” The East Village favorite Maharlika provided my first taste of Kare-kare a braised oxtail dish served with a sauce of ground peanuts, onions, annatto seeds, and topped with bok choy. It’s a simple, straightforward dish that gets a kick when paired with bagoong, a salty fish paste that’s added according to taste. 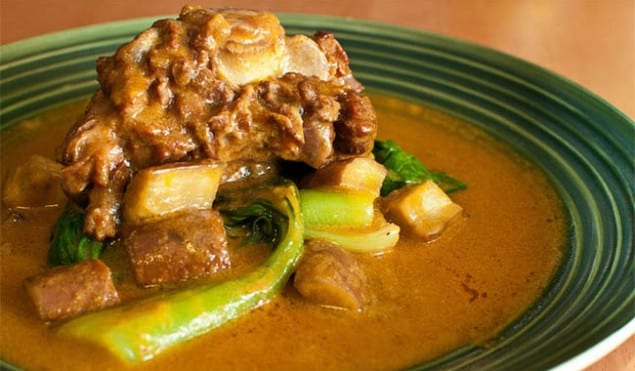 Like other dishes in Filipino cuisine, no one’s exactly sure how Kare-kare originated. Some note the dish was introduced by a group of Moro elites while others contend it’s a play on an Indonesian curry called Gado-gado. The most convincing argument however is that it hails from Pampanga, the first Spanish province in Luzon, fondly nicknamed the ‘culinary capital of the Philippines.’ Peanuts, a South American legume, were introduced to the Philippines in the mid-16th century by the Spanish, centuries after the arrival of the Moro elites and decades before the Portuguese introduced the legume to Indonesia.  The other essential element of the dish is the annatto seed (another South American import) that give the dish its characteristically orange color (interestingly enough the annatto seeds also are used to give Gloucester cheese its orange color). Like any Filipino dish there are regional variations—other beef cuts are substituted for oxtail and accompanying vegetables can range from eggplant to Chinese cabbage.

After tasting Kare-kare it’s no wonder the culinary world has heaped praises on Filipino food, which until very recently, has existed largely outside the gastronomic radar. According to food critics, this is a good thing. Filipino food is frequently contrasted with Thai food and for critics this positions Filipino rather than Thai food as a more authentic experience. Because Filipino food hasn’t become popular it’s resisted assimilation to the American palate.  The popularity of Thai food in the United States is lovingly referred to by critics as a “bastardization” that bears little resemblance to cuisine in Thailand. Filipino food has not had to undergo such changes, largely because it hasn’t been popularly adapted. Despite claims of an abundance of inauthentic food by Filipino Americans, the fact remains that Filipino food is much more likely to be authentic simply because it’s more likely catering to Filipinos, rather than non-Filipinos. But authenticity is of course and especially in Filipino cuisine, relative. Andrei notes that the touchstone of authenticity was her mother’s kitchen. Other Filipino- Americans I interviewed agreed. 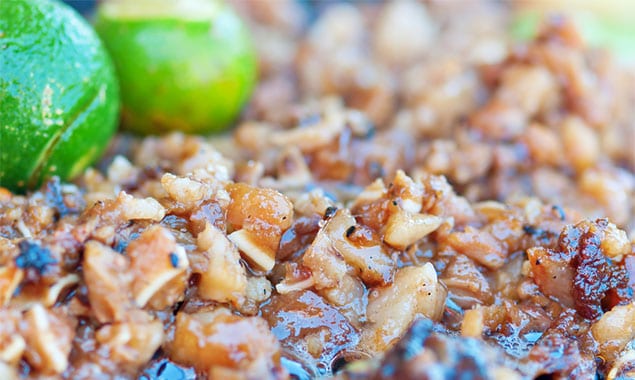 In search of authenticity I traveled to Queens where over half of the city’s Filipino residents lived. The Kare-kare at Tito Rad’s Grill & Restaurant in Woodside tasted as delicious as the one I sampled at Maharlika; the sisig at Engeline’s Restaurant was equally as succulent as the version served at the Pig and Khao and the version by Jeepney,   which featured sisig on flour tortillas with avocado crema. Whether it was on the Lower East Side or in Queens people couldn’t agree which restaurants were more authentic.  There was a hesitancy to dub Maharlika ‘authentic’ because the head chef isn’t Filipino. A server noted that the Filipino spaghetti “didn’t have the right kind of sweetness . . .  it tastes different in the Philippines.” An eavesdropping patron at Tito’s suggested that the most authentic Filipino food was actually in New Jersey.

Filipino food is difficult to define which makes it difficult to authenticate—it’s a mix of indigenous cooking, fusion from neighbors and Spanish cuisine. It’s equal measure native and adopted. It’s localized to individual kitchens.  It’s confusing, slightly complicated, and historically contentious cuisine. What makes claims of authenticity more confusing is that historical mentions of Filipino cuisine bear little resemblance to modern-day dishes with the same name. Take sisig for example. Historians note that sisig was first mentioned in 1732 by friar Diego Bergano who described the dish as a papaya and green guava salad eaten with salt, garlic, pepper, and vinegar. The modern sisig bears little resemblance to its historical predecessor and is a carnivore’s delight—a sizzling mixture of pig cheeks, ears, snout, chicken liver, onions, lemon and chili, served on a sizzling plate.

Questions authenticity aside, my foray to explore Filipino was overwhelming positive. Which made me wonder why weren’t there more Filipino restaurants? It is perhaps because Filipino food doesn’t follow the typical ethnic-cuisine-adaptation-trope.  The story is a predictable one: immigrant group arrives in America; immigrant group is shunned (by nativists and undoubtedly the immigrant group before them); immigrant community bands together; ethnic restaurants begin to attract the previously xenophobic locals; food is adopted into culture (and hearts) of locals.  Cue credits and obligatory dance scene.  Italian food is now the nation’s favorite ethnic cuisine.  Items like spaghetti and meatballs, General Tso’s chicken, and nachos represent mainstream American palates lovingly adapting and destroying ethnic cuisine.

Even if the cuisine isn’t entirely commercialized there are ethnic foods that make it into the American pantry like bagels, fries, hotdogs, and hamburgers, although they are totally disassociated with their heritage (Jewish, Belgian, and German) and inappropriately dubbed ‘American originals.’  Filipino food doesn’t share a similar history, which is curious considering that Filipino immigration predates the arrival of other immigrants from Eastern Europe and Asia.  Referred to somewhat coarsely by locals as ‘Manilamen’, the first Filipinos in America were sailors who settled in southern Louisiana to become shrimp farmers.  Larger Filipino communities were established in the late 19th and early 20th centuries in Hawaii and along the west coast, while the largest wave of immigration occurred after 1965. Despite their large numbers you’d be hard pressed to find chicken adobo as easily as an enchilada.

It’s a shame that most Americans haven’t tried Halo-halo—a Filipino play on shaved ice. The bottom of the drink is a layer of condiments, sweetened beans, purple yam, tapioca, gelatin candies and jack fruit, that is covered in ice and topped off with milk. It’s a wonder how beans made it into a dessert, and an even bigger wonder how it complements the drink. Considering how fanatic Americans have become with pork, it’s a shame not many have tried lechon. A slow roasted suckling pig, lechon is a flavorful pork dish with skin so crisp it snaps when bitten. Or Filipino barbeque (I nabbed a barbeque pork skewer at the Philippine Independence Day Parade and it was consumed in less than a minute). Or suman—a slightly sweet rice bundle steamed in a banana leaf. 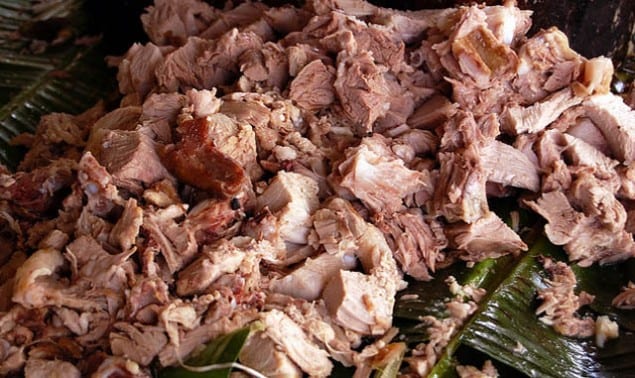 The lack of Filipino food in the United States isn’t a big deal until you compare the size of the Filipino population to the number of Filipino restaurants. It gets worse when you contrast it against other ethnic groups with smaller populations. Take Thai food. Manhattan alone has 280 Thai restaurants, the twin cities of Minneapolis and St. Paul boast of 56 restaurants, while small suburbs like Lima Ohio ( of Glee fame and population of 38,000) has four Thai restaurants. This is in contrast to the 237,583 people of Thai heritage in the United States and the conservative estimate of 2,000 Thai-food restaurants nationwide. In New York Thais are the 14th most populous Asian group in the city and in 2010 numbered 4169 residents, a number less the Filipino population on Staten Island.  Overall, Filipino restaurants  represent less than 16% of Thai outposts in the city.

The picture doesn’t improve in the rest of the country. According to the 2010 census Filipinos represent the largest ethnic groups in Alaska, Arizona, Nevada, California, Hawaii, Idaho, Montana, New Mexico, Washington, Wyoming, and South Dakota.  However, the number of Filipino restaurants in these areas is noticeably low. Alaska’s three largest cities boast nine Filipino restaurants. The state of Arizona—13, Nevada—42.

What I did learn in my gastronomic and historical foray into Filipino food is that the cuisine seems poised for a breakthrough. Acclaim from celebrity chefs and promotional tours have piqued the taste buds of the culinary community.  The food is flavorful without being overbearing in spiciness or sweetness. It’s diverse enough to please picky eaters and recipes can be toned down to appease the more health conscious amongst us. It celebrates pork, it makes use of local ingredients. It’s an inventive cuisine that’s slowly finding a cohesive voice for the mainstream market. There may be a day in the near future where Filipino foods like pancit and lumpia are as ubiquitous as pad-thai and spring rolls.I’ll welcome the day with open arms and an empty belly.

The Secret of Joe’s Pizza in Greenwich Village, NYC