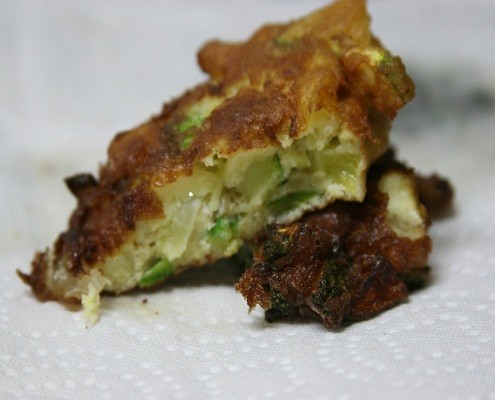 Maria Romano is a recipe creator and ingredient huntress by…

Maria Romano whips up a crispy and savory cake of egg and zucchini.
By Maria Romano

As you know, dear reader, great food need not be complicated or difficult to make; the best foods are simple, unpretentious, and fun to create and eat.  This frittata fits the bill and then some- make a quick batter, fry crispy golden, consume!

This recipe was developed by my grandfather, who sold zucchini frittata (along with artichoke and abalone- those were the days)  in his deli.  His goal was to make them sandwich-sized without cutting (as you would a traditional, pan-sized frittata) and to increase the delectable fried surface area. Also, it’s easier to simply fry a pattylike cake than go through all the oven and flipping stuff with your typical big frittata.  Also, this frittata is actually fried, so the name is accurate.  Fancy that.  Anyway, the resulting mini frittata is perfectly sized for a sicilian roll and full of the addictive caramelized delight that only onions and eggs can give you.  The frittata developed a cult following at his deli. 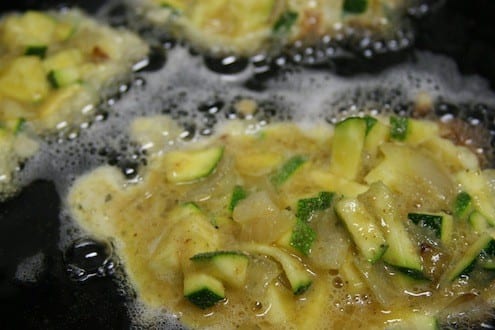 Eat it with a simple salad or drizzled with balsamic vinegar to cut the grease.  And since you’re already eating so much delicious oil, why not throw it on a beautiful roll made of durum wheat.

Maria Romano is a recipe creator and ingredient huntress by day and contributor to Honest Cooking by night. Her culinary affinities and inspirations include food history, food in art, spices, exotic ingredients and anything else that catches her eye. You can read about her (sometimes mis)adventures on her blog, Arbiter Elegantiae.