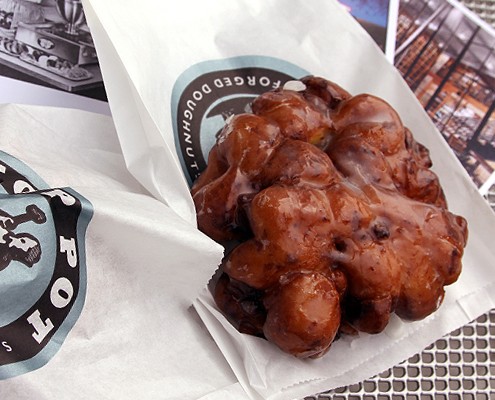 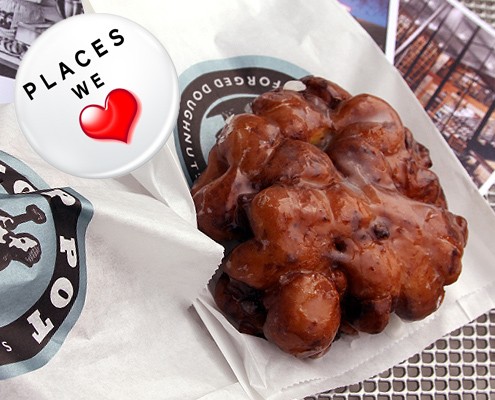 I brake for Top Pot’s apple fritters.I literally do. Like a screeching, burnt-rubber halt, just to stop the car and run in for an Emergency Doughnut Break. Okay, so those breaks don’t technically exist on any official national emergency plan, but I did swerve the car around on my last trip through downtown Bellevue, where there’s a sibling store that branched out from its original Top Pot shop in the Capitol Hill neighborhood of Seattle. I was willing to risk traffic citation and sidelong glances from people on the street, just to get a bite of sugar-glazed, cinnamon-rich heaven.

Top Pot is the little doughnut shop that rose from sweet Seattle secret to national recognition on food shows and even a spot on CNBC’s How I Made My Millions, a program about entrepreneurs who hit it big. Top Pot’s founders had a distinctive love of 1950s vintage, which heavily influenced their flagship store, most notably their restored neon sign that was recovered from an old Chinese restaurant. The restaurant was named “Topspot,” but en route to the sign’s restoration, the “S” fell off, and “Top Pot” was born. The name may have been a quirky act of providence, but the intent is clear when you step into any one of Top Pot’s multiple locations in and around the Seattle metropolitan area – they want you to feel comfortable, sit for a spell, and enjoy their doughnuts and coffee. Whereas most large chain doughnut shops feel like a cramped rush of get-your-doughnuts-and-go for morning commuters, Top Pot’s cafes have sitting areas with chairs and tables, and the relaxed ambiance that encourages you to actually enjoy your sweet treat versus shoving it in your face as you dive into traffic. And their coffee is as good as their doughnuts, serving small-batch roasts from sustainable farms. Coming in a close second to their apple fritters is enjoying one of their original Old Fashioned doughnuts in the crackled flower-petal shape with a mug of their plain drip coffee, and savoring every moment of it.

But enough about ambiance, what about the traffic-stopping doughnuts? Top Pot describes their doughnuts as “hand-forged,” which means no massive metal contraption produced rows of perfectly-formed pastries. Top Pot’s doughnuts are rolled and punched by hand, yielding rustic wabi-sabi shapes that are more characteristic of a little mom n’ pop diner, further lending credence to their wistful love of nostalgia. Whereas most people are probably used to the lighter, yeasty doughnuts that are mass-produced, Top Pot’s signature dough is more cakey and dense, having a more hefty bite to it.

This dough texture lends itself perfectly to their almighty apple fritters, which are a gnarly, sugar glaze-coated landscape of lumps and bumps, heaped with cinnamon in its little wrinkles and crevices, with small bits of apple peeking out. The taste is intense, the cinnamon overtaking the apple by a large margin, but you never lose the sweet, yeasty flavor of their dough amid all the toppings. And it’s no petite pastry – the fritters are the size of a squished softball and sort of resemble The Thing from The Fantastic Four. While you can easily split it with two people, I allowed the glutton from within to emerge, enjoying a whole one all to myself and getting a second one for my fella for an afternoon treat. The density of the dough and the ample sugar glaze helps keep the fritter remarkably well-preserved for a later snack. Don’t think of it as frosting, merely a protective layering for later enjoyment. Functional frosting, what’s not to like?

So, let the warring comments start over which Top Pot doughnuts are the best (Sprinkles vs Cruller? Old Fashioned vs Maple Bar?), but I think those who have visited their shops and experienced their revival of old timey-doughnut charm can agree that Top Pot has elevated the humble breakfast pastry to an extra pleasurable experience.