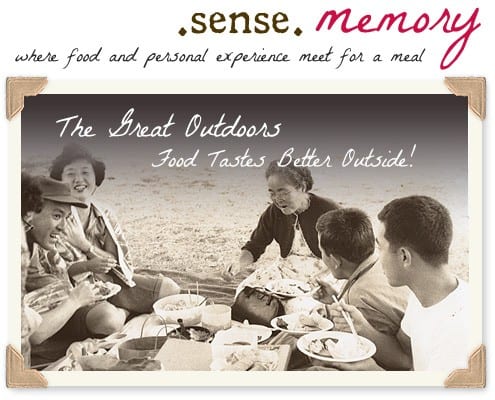 What is it about eating food outside that just makes it taste more vibrant and memorable?
By Denise Sakaki

Hamburgers sizzling on a grill with a constant hiss with momentary interruptions by breathy flare-ups that lash through the metal grate, as if to take a bite. A beach bonfire with hot dogs roasting on sticks, the bitter smell of burning wood mingling with the bright scent of the ocean spray. The moment of slight panic when that skewered marshmallow is engulfed in flames, but knowing once the fire is blown out, that marvelous char contains a gooey center for the perfect S’more.

My mother often says, “Food just tastes better when you eat it outside.” And as we all know, moms know best.

I think of the last chapter of Anthony Bourdain’s bad-boy food/travel essay compendium, A Cook’s Tour, specifically the short piece simply titled, “Perfect.” He sums up what it means to seek out The Perfect Meal, and that it’s just wasting one’s breath, because as in life, most “perfect” things attain mythic status in retrospect. He’s writing this closing chapter while on a beach in the French West Indies, a place he first visited on his honeymoon with his wife in the 80s, and despite a burgeoning career as a food personality (this was written back in 2001), he regards this beach as a place of refuge. No Michelin-starred restaurants, no constant travel, just the feeling of the hot sand between one’s bare toes, and the simple pleasure of a cold beer and eating barbecue ribs at a favorite lunch shack owned by a guy named Gus that he’s known since 1984. Despite the cynical elusiveness of perfection, Bourdain lovingly paints a portrait of what his Perfect Meal is, at least in this moment of his life, and it’s no coincidence that it’s a moment enjoyed in the great outdoors.

What is it about eating food outside that just makes it taste more vibrant and memorable? Sure, there is the looming threat of picnic ants, swarming mosquitoes and the like, but when I think back on my own Perfect Meal moments, they are inevitably ones spent in the space of nature. Summer is already on the wane, the daylight ebbs a little sooner than it did a month before, and I know I will miss the lazy, warm evenings standing barefoot on a patio, beer in hand, waiting for the grill to have its way with whatever is over the fire. It ritualizes what would normally be a basic weekend meal and that marvelous fiery kiss from a grill elevates a packaged weenie into something far better than its humble processed beginnings. I attended the annual Burning Beast outdoor meat-fest at a farm outside of Seattle for the first time this year. Several restaurant chefs and their team of cooks built ad hoc grills and pits to babysit hot coals and coax a variety of sustainable meats towards flavorful perfection, all spread out across a giant pasture field. Sitting outside, the smell of smoke soaking into our hair, clothing and skin, it enticed the senses into savoring each bite. The earthy, heady quality of meats like bison or boar, mixed with a scent of wet grass that permeated the heavy, humid air – it’s not just ambiance, you’re devouring as much of the surroundings as what’s on the plate. Smells and sensations too bold to ignore, they season a meal with something that can’t be reproduced in the closed-up confines of a home or restaurant.

I can still taste the flavor of the ocean salt on my fingers, naturally seasoning a sticky rice ball musubi packed for lunch while on my grandfather’s fishing boat. I was maybe ten years old, learning it doesn’t matter what you may capture with hook and line, bring a bento lunch because it’s fishing, not catching. The heat of the sun out on the open water would warm our food pulled from the chill of a cooler, opening up the smells and flavors from cold fried chicken. The beads of condensation immediately forming on a can of soda, I remember how refreshing a basic sip of cola would feel against the summer heat. I don’t remember what we caught, if we brought anything home that day or any others spent on that old boat, but the relaxed meal of simple leftovers eaten while on the ocean, gently rocked by a lazy current is something that lingers many years later.

During those summers spent with my grandfather in Hawaii, my family and I would have regular picnic lunches at our favorite park named after the last monarch of the Islands, Queen Liliuokalani. Designed and carefully curated like a traditional Japanese garden, laced with tidal fish ponds, we would sit under the cover of my favorite red pagoda and eat all my favorite things from the local okazuya lunch shop, Kawamoto Store – musubi rice balls, fried pork tonkatsu, little corn beef hash patties cooked crisp on the outside and fluffy in the center, all meant to be eaten simply with chopsticks or more enjoyably, with your fingers. A style of working man’s food originated in Okinawa and adapted over the years for Hawaiian tastes, it’s as basic and comforting as a cheeseburger and fries, and I couldn’t imagine a summer without them.

I was looking through some old family photos when I discovered some of my father as a child and a young man, spending summers at that same park and having outdoor picnic lunches with family. Age has faded the photos, but the places are recognizable, as are the people in the sepia-toned images, albeit as much younger selves. They were taken before I was even a thought in anyone’s mind, but the familiar faces, people gathered on blankets surrounding a picnic feast felt immediately present, as if I could have stepped into that moment sixty years ago and claimed it as my own memory. I can’t break the laws of time and space, but I know exactly how my family felt in those old photos, having lunch together in a favorite picnic spot, and I’m pretty sure the food tasted just as extra good then as it does now when enjoyed outside.