Marinated porcini mushrooms in a escabeche of tomato, onion, olive oil, vinegar and spices, served on toast.
By Miriam Garcia

It’s mushroom season here in Spain. This year it took a while for it to arrive because of the drought, but it finally did. An excellent opportunity to make a delicious starter or appetizer with mushrooms. This recipe for marinated mushrooms on toast, a mostly classic escabeche, is by Mr. José Andrés. He advises to use a mixture of wild mushrooms, but I happened to find some wild porcini mushrooms at my greengrocers that I could not overlook and I had to make me some boletus escabechados. So cute and chubby they were, these boletus… and they looked at me with their tiny boletus eyes… But I took them by the hand, carried them home and cook them all the same. I was merciless, just like the Walrus and the Carpenter with the oysters.

I’m really nuts about marinades and escabeches, this great method of food preservation which was apparently introduced by the Arabs in the Iberian peninsula, so I have quite a few of them on the blog. This marinated mushroom recipe is different in that the marinade sauce carries grated tomato, which adds a very tasty touch. Also, admittedly, porcini mushrooms are quite more flavorful than the regular and ubiquitous button mushrooms, at least the cultivated varieties which lack any forest aroma. 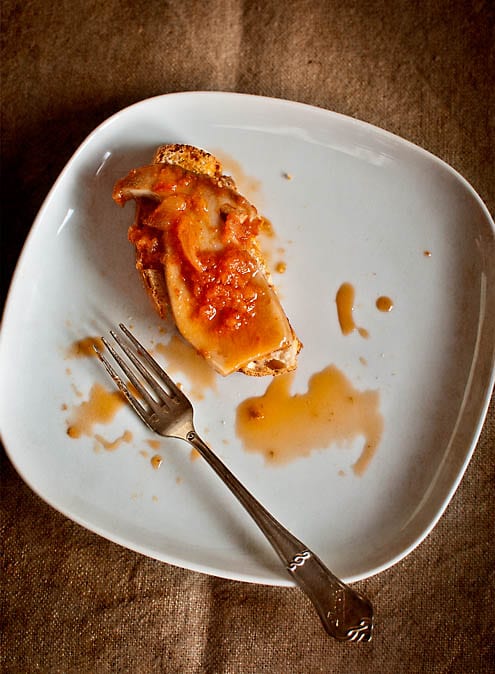 5.0 from 1 reviews
School of Tapas: Marinated mushrooms on toast

Print
Prep Time
15 mins
Cook Time
15 mins
Total Time
30 mins
Marinated porcini mushrooms in a escabeche of tomato, onion, olive oil, vinegar and spices, served on toast.
Author: Miriam Garcia
Recipe Type: Appetiser
Serves: 10
Ingredients
Instructions
2.2.6
Like all escabeches and marinades, it’s best to let it stand for at least one day to allow for the flavors to settle and develop. This escabeche will last several weeks in perfect condition in the refrigerator, but that is if you don’t eat it before that. The marinade sauce is simply superb, great for dunking bread as we love to do in Spain. These marinated mushrooms are delicious served on a good slice of toasted bread, letting the juices soak through…

How to Pair a Tapas Spread with European Garnacha Wines