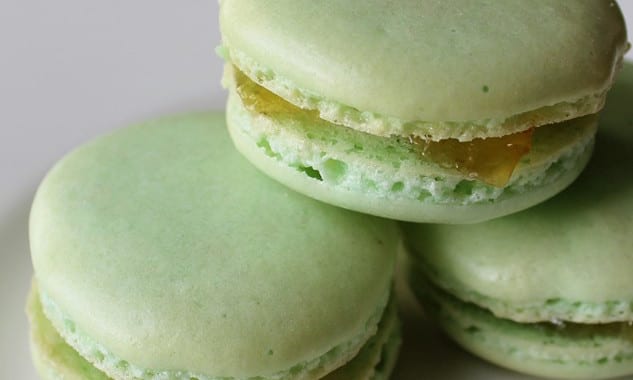 If spring were a cookie, it would be a macaron. Pastel hued and perfectly formed, these bite-sized, sandwich cookies are so pretty that it almost seems wrong to sink your teeth into one. Almost.
By Sheila McGrory-Klyza 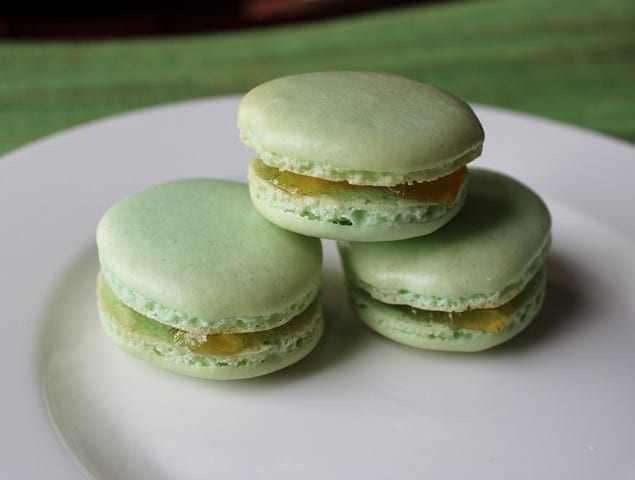 After the brutal winter we’ve had in the Northeast—and my Southern friends tell me it wasn’t much better down there—I am so ready for Spring, and anything that signifies it. Flowers and green grass. Sandals and sunscreen. Bike rides and readying the garden. Even allergies and insects, bring ‘em on (well, maybe not ticks). And bring on the macarons. 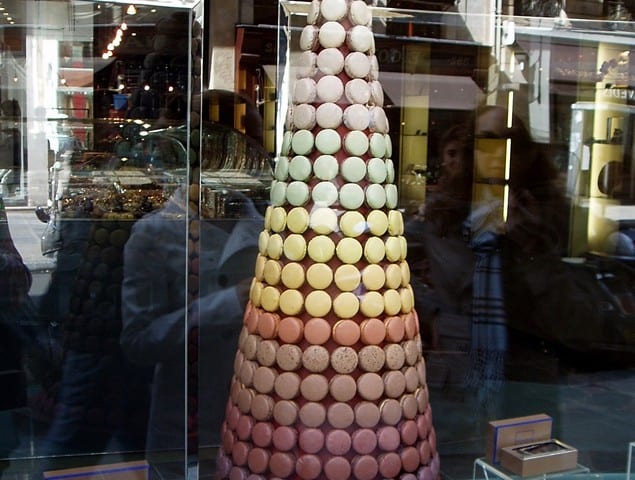 Not to be confused with macaroons—the large, egg white confection or the heavier coconut version—macarons are made by baking almond meringue in the shape of small, flat disks, and then sandwiching a filling between two discs to form a single, perfect cookie. Their color, usually pastel but sometimes more vivid, reflects or at least hints at the flavor combinations contained within. Flavors range from classic chocolate and vanilla to the more exotic jasmine, rose petal, or lychee. Sometimes savory flavors are added, such as white truffle, foie gras, or olive oil, which are hit or miss but always interesting.

A few years ago while I was living in Paris with my family, we couldn’t resist when walking by one of the city’s countless pâtisseries stopping in to try just one macaron. This lack of resistance developed into an informal tasting poll to discover the Best Macaron in Paris. Through our “research” we quickly learned that one macaron—crisp on the outside and tender in the middle—is all that’s needed to satisfy a sweet tooth. And refuel a couple of teenage girls when they’re weary of doing other research around the city guided by their homeschooling teacher/Mom. Among the various macarons we sampled over several months, our two top winners were Ladurée, considered by many to be the grandpère of macarons, and Pierre Hermé, a relative newcomer that has a fast following and is renowned for bold flavorings (Pierre Hermé’s olive oil and vanilla macaron was my blue ribbon winner).

Ladurée, which claims to have been the creator of the Parisian macaron, now has shops scattered throughout the globe including two in Manhattan. I’ve been to both New York shops, extending our research, and have concluded that Ladurée macarons are just as good stateside. In classic New York spirit, lots of other competing macaron shops have now popped up all over the city, but I have yet to sample those. 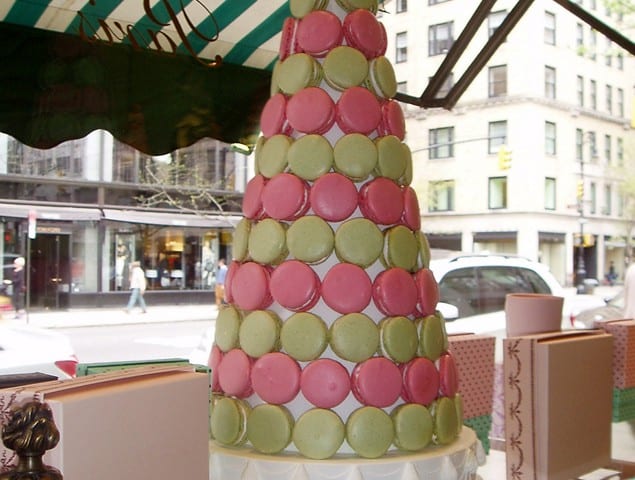 As part of our research in Paris, Faye and I took a class at the cooking school La Cuisine Paris to try to unlock the secrets behind making macarons. Over the course of an afternoon we learned the finer points of making these delicacies, and in the end we turned out some decent, if imperfect, ones ourselves.

The ingredients are pretty common—sugar, egg whites, and almonds—and the flavorings need only be as exotic as you would like them to be. The technique, however, can be a bit tricky, and it may take some practice before they turn out just right: not too flat, or too chewy, or too crispy. You’ll know you’ve succeeded when the tops are smooth and glossy and you see the frilly “foot” at the base of the cookie, a sign that it possesses the essential contrasting textures of crispy and chewy. At home when I’ve made them, it’s taken me a few tries to get them right and I wish I knew the secret. I don’t know what I’ve done differently when a batch turns out successfully, but this mysterious quality is all part of the allure of the elusive, perfect macaron. 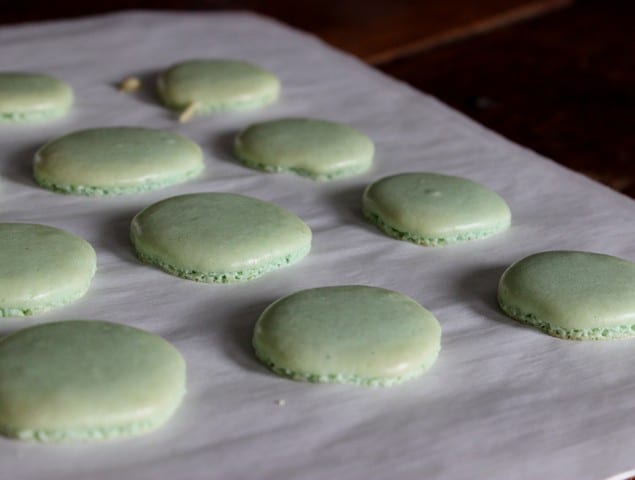 Once you’ve mastered the basic recipe for making the cookies, you can experiment with various flavorings, such as adding a ground spice or cocoa powder to the batter, or using a different ground nut from almonds (pistachios and hazelnuts are both popular variations). The part of the cookie that allows for even more possibilities is the filling, which is usually a chocolate ganache, buttercream, fruit jam, or citrus curd. If you don’t make your own jams and curds (and I have to say I don’t personally know anyone who does), an artisanal product will work fine and no one will notice the difference. To make your macarons pastel, use a high quality powdered food coloring. If that’s not available, drops will work, but be careful not to add too many or they’ll make your batter watery. 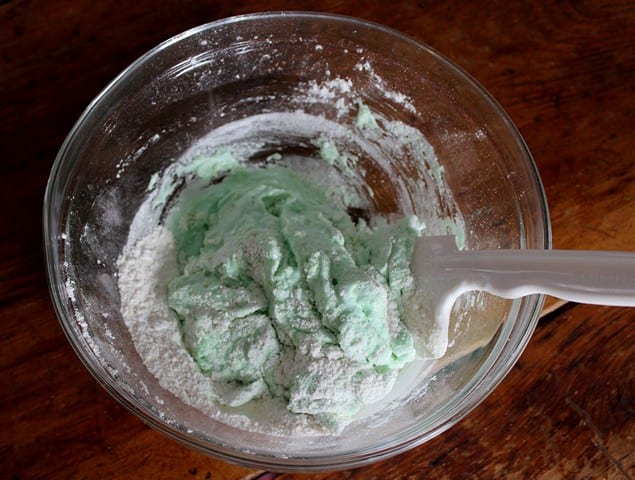 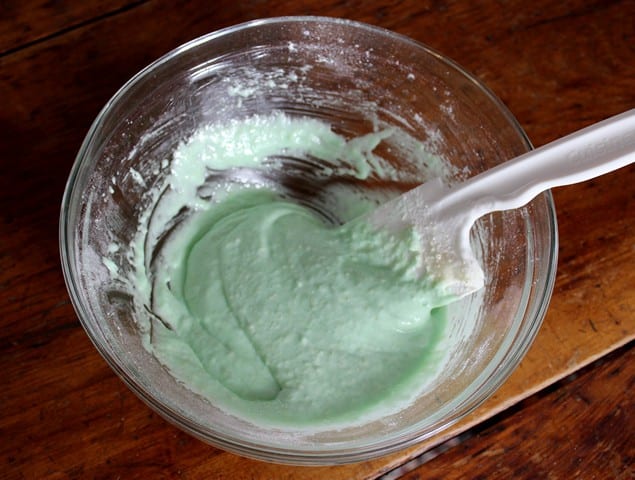 Whole recipe books devoted to macarons offer myriad flavor combinations, but experimenting with your own is part of the fun. Here, I’ve included a recipe for a verdant green macaron inspired by the arrival of Spring. It’s filled with jam (in this case apricot), which makes for a simple filling that you can change to suit your fancy. 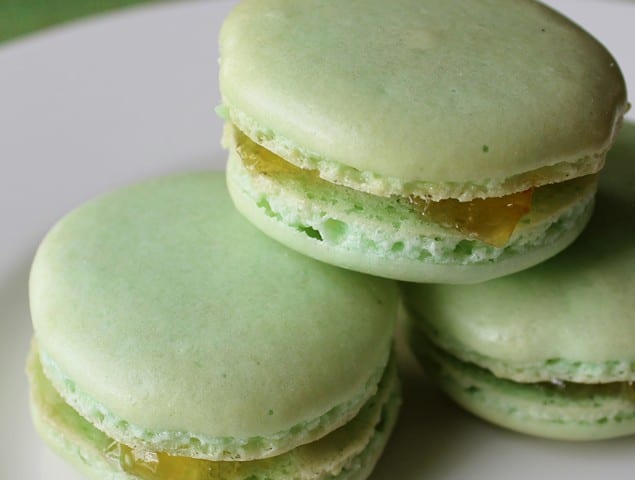 Sink your teeth into a macaron and enjoy May in Paris, or wherever you are. 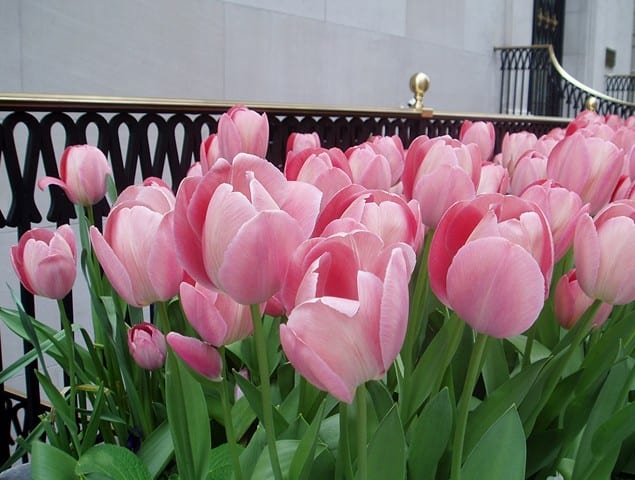 Print
This recipe was adapted from the one I learned in a baking class at La Cuisine Paris.
Author: Sheila McGrory-Klyza
Recipe Type: Dessert
Cuisine: French
Serves: 24 macarons
Ingredients
Instructions
3.2.2885