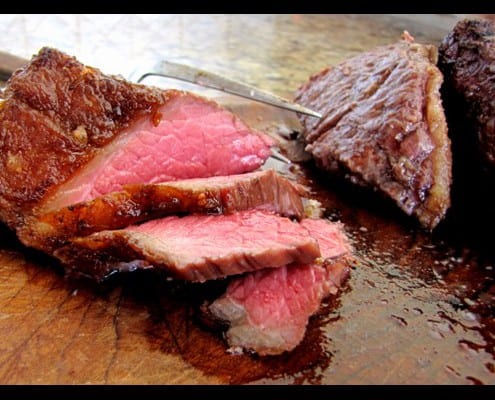 What is a picanha? In American butcher-lingo it has been tragically baptized the “rump cap”. It is a triangular cut from the top of the, that’s right, rump region of the cow, and just like our rumps, it has a beautiful layer of fat.  It is not a muscle that moves much during the animal’s life, and so, remains tender.  The picanha’s blanket of fat lends the meat flavor and juiciness while protecting it from human error that may occur during grilling.  And because it is little known in North America and Europe, a picanha is a relatively cheap and plentiful national secret. Oops. Did I just say something I shouldn’t have?

When one thinks of churrasco, one often thinks of picanha.  But oddly enough, it is a relative newcomer to the tradition.  It only became popular after it was introduced by Hungarian butchers in São Paulo in the 60s serving immigrant workers at the Volkswagon plant looking to make tafelspitz*.  Once Brazilians came to know it they naturally decided to grill it.  By the 70s picanha became a sensation and the star of the show at any churracaria.  Today it has come symbolize “authentic” churrasco.

If you can get your hands on a picanha, here are a few tips on how to handle the cut in order to get the most out of your grilling efforts.

When talking about the flavors of churrasco, I think the real magic happens on the plate.  With other types of cooking the magic happens perhaps in the mixer or the fry pan or the oven.  A piece of superior quality meat, from a well-raised animal, grilled to perfection is a beautiful thing.  But more than four bites of the same thing, even a beautiful thing, can get boring.  With churrasco, a piece of picanha or other cut grilled to reveal all its inner lusciousness, meets its best friends in the playground that is your plate.  It finds farofa, the crunchy absorption master made of manioc meal toasted in bacon fat.  Think crispy-nutty grits that nab runaway meat juices. Its other best friend is molho à campanha, a kind of vinegary salsa of tomatoes, onions and sometimes bell peppers, that adds freshness and its own tangy juiciness to the mix.  These three make a beautiful mess in your plate.  Meat slices become encrusted in the molho à campanha-soaked farofa, silverware is forgotten, fingers get licked.  This experience is what makes churrasco truly unique.

I make a corrupted version of this great triumvirate.  Instead of a traditional molho à campanha, I make a salsa of tomatoes, mango, onions, cilantro, lime juice and jalapeños.  Even after 13 years of living in Brazil I can’t shake my California roots.  Sometimes we even make tortillas.  What’s shocking is that there are quite a few of my friends here that now serve this salsa with their churrasco.  Like those Austrian butchers, I guess I’m working on a new version of “authentic”.

*The Wessel family is credited for introducing the picanha to Brazil