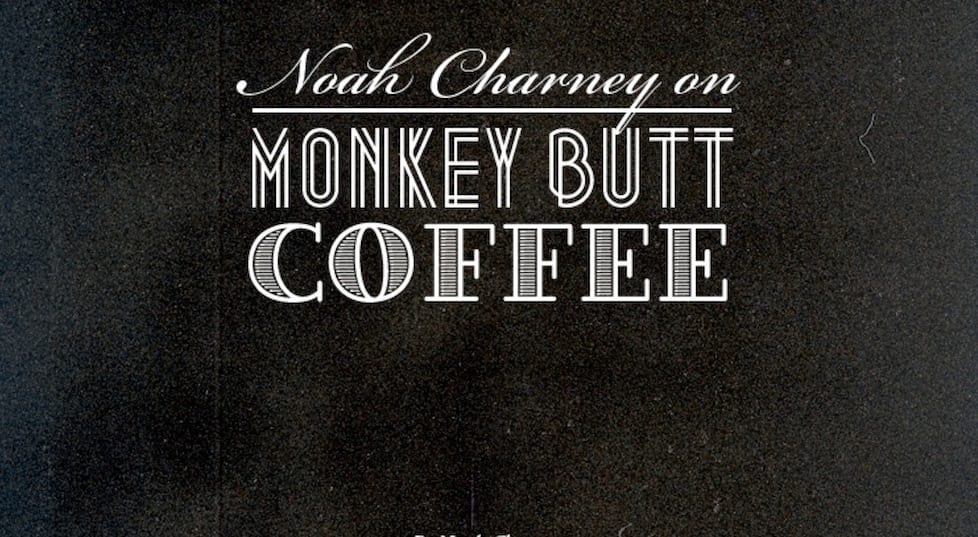 Chickpea Salad with Feta and Cilantro

Weekend Reads brings you longform features from Honest Cooking’s first iPad Magazine, which you can download for FREE here.
By Noah Charney 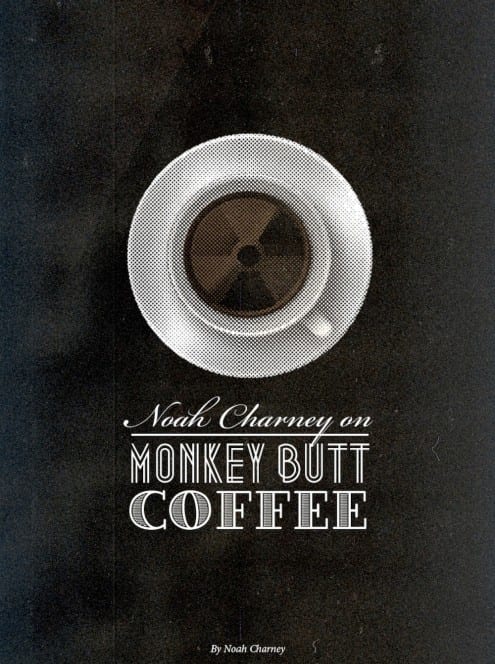 This morning I drank a cup of monkey butt. While that image sinks in, permit me to explain.

I am a great coffee lover. I look forward to my coffee the way (I’m told) smokers anticipate their cigarette, or (I’m told) crack users lust after their crack. (There’s a reason I mention crack, bear with me). I’m not addicted to coffee — I have 2-3 cups a day. I’m also not snooty about it. I don’t need an hour-long, lavishly-poured Japanese extraction technique, nor a bean handpicked by a Sumatran virgin listening to harpsichord music. I just like coffee.

I split time between Italy and Slovenia. In Italy, I drink cappuccino in the morning and espresso macchiato in the afternoon. In Slovenia, most folks drink Turkish coffee (a nice holdover from the days of Ottoman raping and pillaging), which has grown on me. When I first tried it, I remembering thinking that it tasted like it had been percolated with dishwashing detergent, and I wasn’t too partial to the mouthful of grounds that I kept inadvertently sucking up. Now I like it: nothing launches you from groggy to vibrating like your morning cup of Turkish coffee. But at home, my inherent lassitude encourages me to use an American filter coffee maker. When I’m in Rome, where I teach, I frequent Tazza d’Oro, which is probably the favorite destination among in-the-know coffee drinkers worldwide. But while I love my coffee, I’m not sure I can taste the difference between Ethiopian Harrar and Sumatra. I just like it when it tastes good, whatever its origin, denomination, phylum, or religious affiliation.

I sometimes feel that I inhabit a hybrid zone that is unacceptable. People are either pretentious about their coffee, treating it like fine wine, or they don’t give a hoot and don’t even think about what they are drinking. But there is a middle ground: those of us who want it to taste good and take note of the brands we buy, but who are not all in your face if you didn’t percolate at 106 degrees. I know I like Tazza d’Oro and Illy, and I know that 100% Arabica beans are the ones you want, but that’s about as far as I go.

Or, as far as I went. Because I recently tried the famous, and famously pricy Jamaica Blue Mountain, prepared for me lovingly (and for only 50 cents more per cup) at Tazza d’Oro. For decades, coffee from the Blue Mountains of Jamaica was considered the finest in the world, and its price reflected this. It ranges from three times to ten times as expensive, per kilo of beans, as other high-end coffees. And it’s damn good. Each time I’ve tried it, I’ve noted its caramelicious flavor, distinctive, recognizable, and fantastic. Jamaica Blue Mountain is my favorite, and one of the few “vintages” that I could pick, metaphorically blindfolded, out of a lineup of coffees. To me it is worth the occasional splurge, like the decision to go for truffle shavings on your steak, or a great Brunello over a good Rosso. But my tastefulness ends there. I can’t tell the difference between the taste of the black truffles and the white ones, which cost four times as much as the black variety. I just know I like truffles.

So, you may be wondering, where does the reference to crack and monkey butts come in? I’m glad you asked.

Today I was at a café in Ljubljana, Slovenia. This place is about as close to a Brooklyn hipster joint as central Europe gets. They have stylishly tattooed and facial-haired wait-staff, gunmetal gray walls, and a selection of eight different beans (including Blue Mountain) that they can prepare for you as espresso or Turkish coffee. Feeling saucy, I thought I might order a Blue Mountain, when my eye was drawn to a coffee I’d never heard of, one that cost ten times more than Blue Mountain by the kilo, and twice as much for a cup! Curious, I decided to splurge on a cup made with the mellifluously-named Kopi Luwak, for 4.30 Euros. I was told that, in order to enjoy the full taste of the coffee, I should not have it with milk — that would be like ordering a 1902 Laffite on the rocks. This sounded like something to try, and I was already excited for the experience, so I forewent my usual gigantic café latte and ordered a minimalist espresso.

Food and drinks excite me to an almost pathological degree. My family once drove four hours, from our Connecticut home to Baltimore, just to get a bucket full of Old Bay-doused Thrasher’s French Fries, and we’ve done road trips built around a tour of wayward barbecue joints. I’ve driven to the tiny village of Hum, in Istria, Croatia, to eat the world’s best potatoes au gratin, and I’ve taste-tested every Coda alla Vacinara available in Rome. When it comes to edible adventures, I will track, hunt, and kill to get the best of any dish. I think of these trips as culinary pilgrimages. Whereas some go to Lourdes to pray to the Virgin Mary, I’ll happily journey to Sarajevo to gorge on ?evap?i?i v lepinje s kajmakom, which is just as tasty as it sounds.

I usually go for the out-of-the-way shacks that might not satisfy every health regulation, but make a mean, and unpretentious house specialty that is worth a journey. White-tablecloths restaurants are fine, and I’ve been to my share of Taillevents and Fat Ducks, but I’ll take a greasy burger over a filet mignon any day. I think pretense has no place in fun eating, which should be a visceral, hands-dirty experience. So while I was slightly suspect about the extreme high price of a Kopi Luwak, worried that it might be a fad of the coffee-as-fine-wine set, I was hoping I might discover another version of the Blue Mountain I’d come to love. Little did I know just how “hands-dirty” an experience Kopi Luwak would prove to be.

The waitress brought me my espresso, setting it down with a flourish. She seemed to give me a knowing look, maybe even a smirk. I read this as one of two things: a) either she knew the pleasure of Kopi Luwak that I was about to enjoy, and was winking co-conspiratorially, or b) she couldn’t believe that some sucker had volunteered to pay 4.30 Euros for an espresso. If it were the latter, then she clearly has never been to LA. It turned out to be option C, to which we return in a moment.

The espresso looked, well, like espresso. It had a slightly earthy aroma to it that seemed distinctive, but then again, I almost always have coffee with milk, so I shrugged this off as a scent rising from my lactose-less beverage.

I took a sip. It tasted good, very good, but I’m not sure it was twice as good as Blue Mountain, and it lacked the caramelocity that I’ve enjoyed in my past coffee splurges. As with most espressos, it was gone in about three small sips. That comes out to about 1.43 Euros per sip, if you’re keeping score.

Unsure whether I was satisfied with my purchase, but glad to have tried something new all the same, I inquired of the waitress the story behind this Kopi Luwak. Why, I asked, did it cost about four times a normal espresso and twice as much as Blue Mountain?

The waitress, with some difficulty, managed to keep a straight face.

“The coffee comes from Indonesia. The process of gathering the beans and preparing them for roasting is, uh, time-consuming and requires a lot of…hands-on work.”

I paused inquisitively, waiting for more.

“It’s made from coffee that have been eaten by a Sumatran monkey. The monkey digests the coffee berries, but not the beans inside them. The beans absorb the monkey’s intestinal juices on their way out its butt. Then farmers come along and collect the undigested beans. They are washed, sun-dried, and roasted. That’s why the beans cost around 300 Euros per kilo.”

I wasn’t quite sure what to say. I hoped that she was joking. Had I really just eaten a cup of monkey butt coffee? At least she’d mentioned that the beans were washed before roasting.

If my life were more like a Ben Stiller movie, I would have promptly turned green, sprinted for the toilet, and regurgitated my monkey butt beans. Who knows, maybe that would have lead to the discovery of another delicacy? But I managed to take this all in stride. So I’d enjoyed a cup of monkey butt — who hasn’t, these days?

A bit of research confirmed the gist of the waitress’ explanation, minus the monkey part. The correction is little more comforting.

Kopi Luwak beans have been digested by a tree-dwelling mammal called a civet, which looks kind of like a lemur. Turns out that there’s even a debate over whether only wild civets poo out the top coffee beans, or whether farmed critters can excrete just as fine a product. While farmed, civet-pooped coffee beans sell in the US for up to $600 per pound, those expelled from the butts of wild civets have fetched $3000 per pound. Apparently my espresso was a steal at 4.30 Euros: some coffee shops in the US sell Kopi Luwak for up to $80 a cup! That’s some pricy monkey butt.

I’m glad to have had this little adventure in coffee-land. While Kopi Luwak is pretty darn good, I’m not sure it’s worth up to $80 just to sip something that once erupted from a tree-dwelling mammal’s rectum. Come to think of it, I bet a lot of folks would pay $80 not to have to drink something that came from anyone’s rectum, regardless of whether they are a monkey or an Asian palm civet.

Next time I indulge, I’m going back to my tried-and-true Jamaica Blue Mountain, and Illy is just fine for my daily brew. Some delicacies are worth the splurge, because they really do make a difference: truffles make everything taste better, but I’m not sure I need the white variety, when the black will do just fine. The weirder, wilder, and rarer may appeal to aficionados, but regular folks like me would have trouble telling the difference. You can get yourself a $5000 burger at a Las Vegas restaurant, made with Kobe beef, truffle, and foie gras. But anyone who orders one is really just doing so in order to later say that they ate a $5000 burger. It can’t possibly be 200 times better than a $25 burger at a fancy restaurant or, to be honest, 2000 times better than a Louis’ Lunch burger from my hometown of New Haven, perhaps the world’s most famous hamburger, which runs about $2.75. Perhaps Kopi Luwak is the $5000 burger of the coffee set? Though I’m guessing (make that, hoping) that there were no butt cracks involved in the burger’s production.

Having drunk a cup of civet-ass coffee means that I have a good story to tell the grandchildren. And next time I sell a kidney, maybe I’ll really splurge, and buy them a pound of wild-ass-excreted Kopi Luwak.