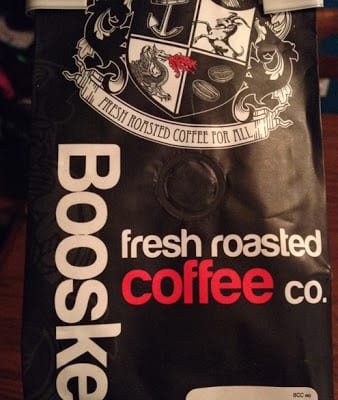 This New Jersey roasted coffee displays a variety of blends including an exceptional combination of two different roasts.
By Bill Walsh

For a state that borders two major metropolitan areas, NJ finally seems to be capitalizing on the large swaths of thirsty coffee drinkers meandering its roads and alleys. I’ve seen several new roasting faces pop up in the past year, but also current companies continuing to grow their reach.

Booskerdoo of Monmouth Beach is one roaster that seems to be evermore on my radar. Recently, I had the pleasure of trying out three NJ-roasted coffees from Booskerdoo Fresh Roasted Coffee Co in my home lab: their Deep Red Bells blend, Guatemala Huehuetenango and Ethiopian Sidamo Peaberry. Except for the Guatemala for which my vacuum pot malfunctioned and went down for over a week, I sampled each coffee via pourover, french press and siphon.

The Deep Red Bells blend, a seasonal coffee that is a blend of two different roasts of an Ethiopia Yirgacheffe Worka Coop Unwashed Organic, a blending method I usually don’t see pulled off well, but Deep Red Bells proved the exception. Via drip, it displayed blueberry cobbler, nougat, rosemary and limeade bubblegum, proving bright and juicy with nice sultry notes of cocoa. The french press smacked of blueberry, semisweet chocolate chips, hibiscus, almond croissant, slight vanilla cookie, rosemary and a touch of sour cream in a light/medium body; a multifaceted and bejeweled coffee. The siphon serenaded me with blueberry, nougat, apple juice, rosemary and cream, making for a smooth and silky coffee full of juicy and succulent flavors.

Next up was the Guatemala, a Rainforest Alliance coffee marketed as nutty and rich coffee. The pourover tasted of molasses, pecan pie, ginger snap, pear, skim milk and pizza crust within a medium body. The french press leaned more towards plum, sarsaparilla, sweet potato, blue corn chips and dandelion greens in a malty, medium body with a cake-ish sweetness. While I found the coffee sweet and a touch nutty, their were a few heavier flavors that kind of weighed the coffee down.

The Ethiopian, last up, made for a mildly intriguing cup. The pourover held white toast, merlot, a pinch of pepper and slight cocoa in a medium body. The french press drummed out blueberry, merlot, pepper, cloves, brisket, med body and smoother and bright with a nice complexity. The siphon detected notes of blueberry, rye, cloves, lemon pepper, brisket and red pepper within med body. For an Ethiopian coffee, the beans had some bright and pleasant facets, but all were a bit overshadowed by a spicy body and a flat, slightly astringent aftertaste

In a short synopsis, I would definitely order two out of the three coffees again (the Ethiopian Peaberry was not my favorite). If you seek some beans, take a gander over to the Booskerdoo, whether you live near Monmouth Beach or you just seek its local flavor.