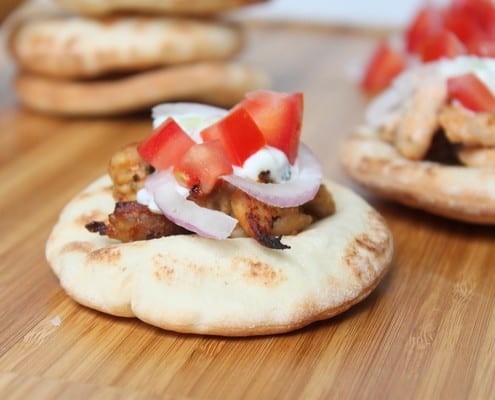 Instead of spending hours roasting meat on a vertical spit, simply marinate thinly sliced chicken thighs in gyro seasonings and then build the gyro sandwiches from there.
By Kelsey Hilts

Gyros were always one of my top choices amongst food truck carts when I was growing up.  Then, when I studied in Europe during college, I ate many more gyros and doner kebabs, especially in France and Germany.   Gyro {the Greek interpretation of the Turkish Doner Kebab} is a sandwich consisting of meat roasted on a vertical spit which is then shaved off in thin slices and wrapped in pita bread, topped with tomatoes, onions, and tzatziki sauce. 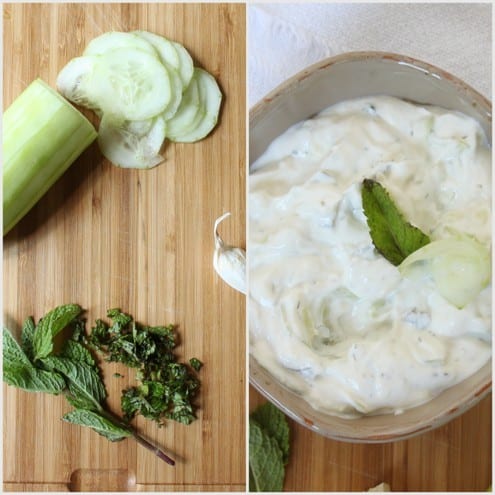 I really wanted to be able to make gyros as a quick and easy meal so I avoided trying to replicate the traditional meat altogether.  Instead of spending hours roasting meat on a vertical spit, I simply marinated thinly sliced chicken thighs in gyro seasonings and then built the gyro sandwiches from there.  I realize that my gyro-inspired wraps are technically not gyros because the meat is not cooked in the traditional way.  However, in my opinion, they taste pretty darn close to an actual gyro.  And they are healthier to boot.

My simple marinade approach came out of trial and error.  When I initially attempted gyros a couple of years ago, I tried making a seasoned meatloaf and thinly slicing it to replicate the roasted meat.  Though I followed the loaf method from other recipes, it just didn’t taste the same.  My recent marinade method essentially makes Greek-flavored tacos and it ultimately satisfies my gyro cravings.

I used mini pitas for my gyro ”sliders” but you can use regular pitas if you want full-sized wraps.  I’m now a fan of the mini versions because they make the gyro an option for appetizers and parties and they are also the perfect size for kiddos.