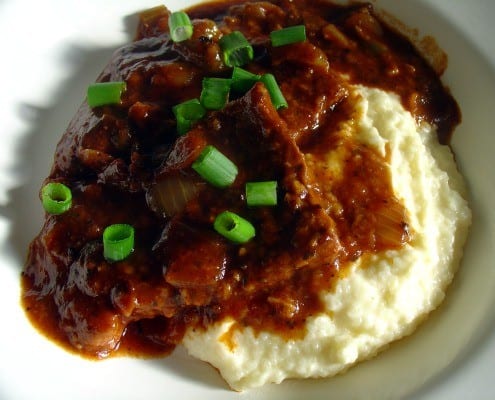 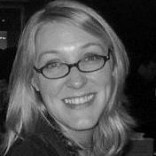 Grillades and grits are one of the two most wonderful things to eat for brunch in New Orleans.
By Jennifer Abbott

If you’ve never had or heard of grillades and grits, then I apologize for not mentioning them earlier.  They’re one of the two most wonderful things to eat for brunch in New Orleans (shrimp and grits being the other).  I’ve never been to anyplace in town for brunch that didn’t offer one or both of these goodies.  Grillades (gree’-awds) are made of beef, veal, or pork; I haven’t encountered a rabbit version yet, but I won’t be surprised when I do.  The beef is a thin, flat cut of top round or chuck–something that can withstand a long, slow cooking.  It simmers in a pot with the trinity (onion, celery, bell pepper), garlic, and a little jalapeno–not traditional, but I really like it–until the rich broth thickens and intensifies, so what you get is a powerfully flavored beef “stew” that is perfect over creamy cheese grits.  This is a great Louisiana recipe to try if you’re hankering for some thick, rich goodness but you don’t feel up to stirring a roux, because you don’t have to.  The small amount of flour used in the browning of the beef will produce all the roux you need.

Another great thing about grillades is that they make the best leftovers.  If you’re so lucky to have some left in the pot, you can use them to stuff a baked potato (yum), thin it out with stock and make soup (yes), add more tomato and use it as a super-rich pasta sauce (gawd), or serve it over or between some thick toasted bread (mercy).  They’re so worth trying out.  If you can’t find top round, you can use chuck roast cut into slices, then pounded, or just use pre-cut stew beef.  I’ve used that before and nobody was sad about it.

Heads up: this dish, like so many of our state’s best pot foods, takes a while to cook: about 3 hours.  As Paul’s Aunt Sue said, “Louisiana food isn’t hard, it just takes all day.” So unless you’re an early riser, it might be best to make this the night before your pals come over to devour it.  Or just chuck the whole brunch thing and eat it for a cozy weekend dinner.  In fact, that’s what we’re doing tonight. 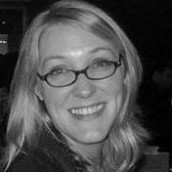