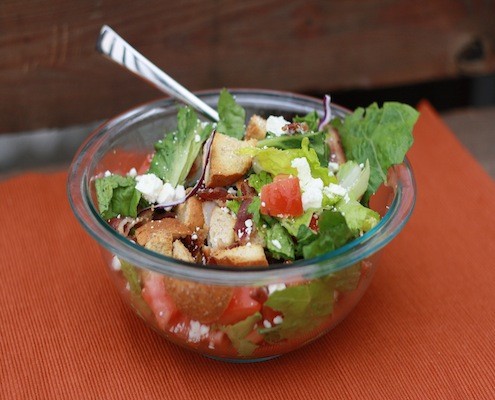 There isn’t much I have to say about this salad. If you love BLTs, you’ll be a fan of this slightly lighter version of the sandwich. I almost think it’s more fun to eat than the sandwich version…does anyone else tend to scrape the roof of their mouth anytime they use toasted bread on a sandwich? Use whatever bread you have on hand for the croutons. I used small whole wheat rolls instead of a French baguette. The feta was a tasty addition to the salad and in re-reading the recipe now, I realized I completely forgot to add the green onions.

Whoops! I also misread the dressing instructions and didn’t save bacon drippings to include in the dressing. Even without, the dressing served its purpose of lightly coating the salad. The job of the dressing here isn’t to steal the show anyways…it’s all about the B, the L, and the T anyways!