Rum-soaked vanilla buttermilk cake layers are stacked up with creamy ricotta and mascarpone cannoli filling and coated in a cinnamon and citrusy buttercream before being glazed with rich chocolate ganache. We’re in dessert heaven. 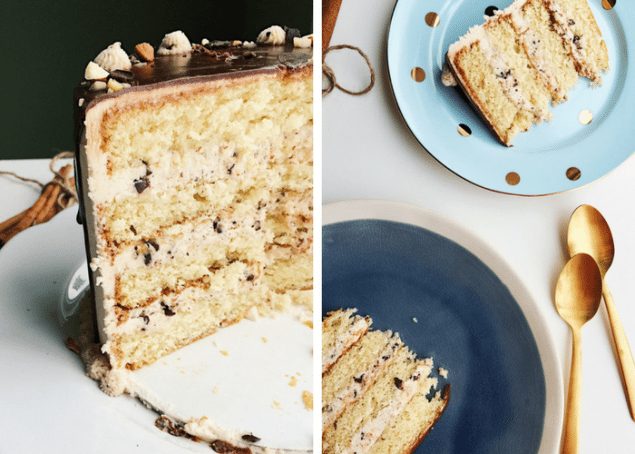 As an Italian growing up in New Jersey, cannolis had a quintessential role in my life. They were a prominent part of any dessert table or special occasion, happily placed next to a colorful cookie tray and sfogliatella (“lobster tails,” another cream-filled pastry).

My family would debate about what local Italian bakery made the best cannoli, each having their passionate opinion. And when a bakery they loved had an off day or put out an inferior product, they weren’t afraid of expressing their disapproval with fiery Italian fever. They’d give them a second or even third chance, sure, but if they didn’t redeem themselves the bakery would become per me sei morto (“dead to me”).

As a kid, I didn’t care much for cannoli filling. It wasn’t sweet enough for my overly sugar-favored palate. I would lick the chocolate chips off the edges and sneak the cannoli back into the pile, chocolate-less. I never dare touched the pistachio ones, not trusting a nut that was bright green; true to my skeptical and questioning nature.

As an adult, I grew to love cannolis. Although, moving out of New Jersey and to the West Coast at 21 has made it impossible to find a good cannoli for the past 10 years. Or, at least, what I was raised and trained to define a good cannoli as. 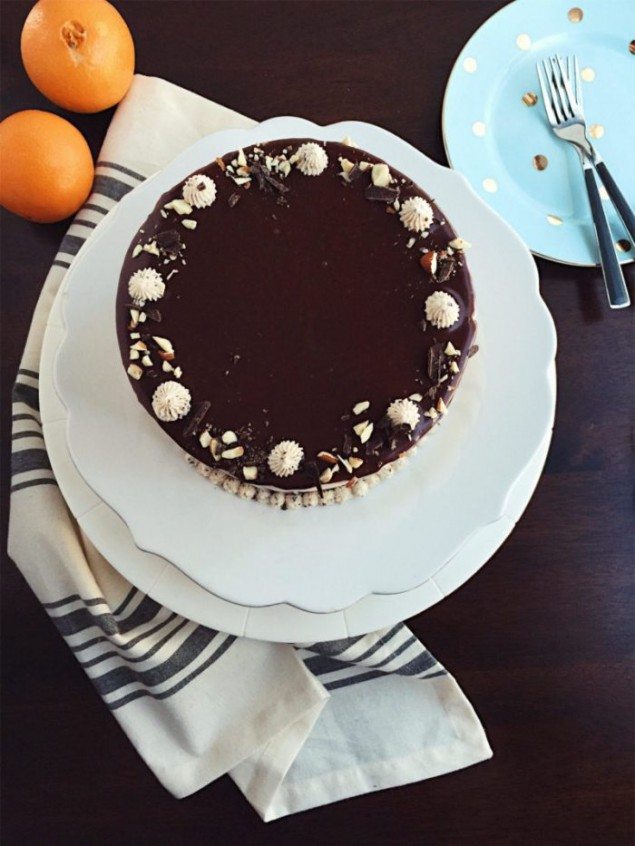 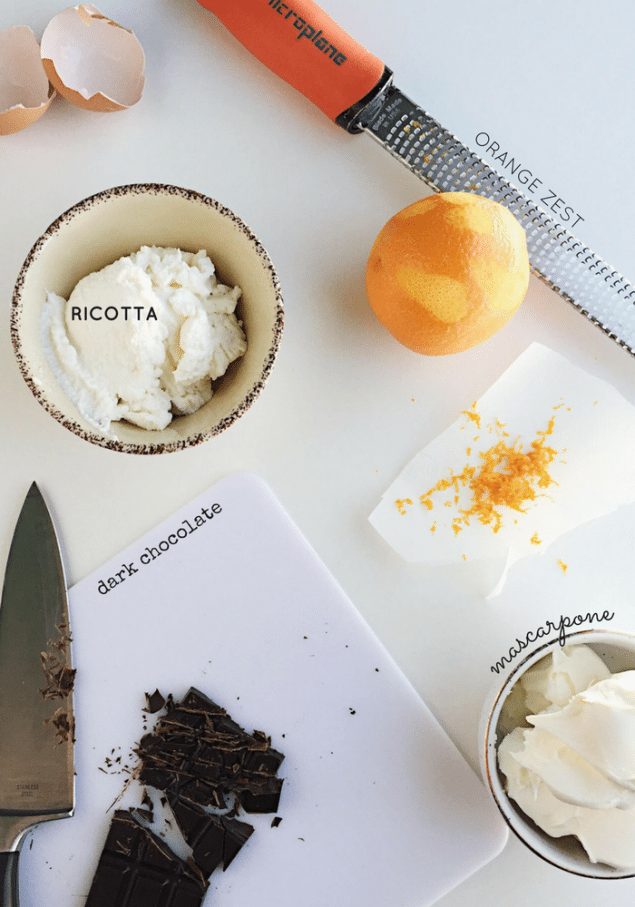 A few years ago, I was working at an Italian-themed hotel and restaurant in downtown Portland as a Pastry Chef. I was in charge of all of the desserts for the bakery, restaurant, and catering, in addition to wedding cakes. I would talk to the brides, set up the tastings, design the cake. I got a phone call one day from a sweet, lovely Italian woman who kept me on the phone for a half hour.

“I heard you are from New York,” was the first thing she said to me.

“Well. I grew up and was raised in northern New Jersey, right outside of Manhattan. I did go to culinary school in New York and worked at restaurants and bakeries there for several years. Maybe that’s why you heard that.” Wait… why was this woman even questioning my birthplace? “Why?”

She proceeded to tell me that her anniversary party was coming up and that her favorite cake was a Cannoli Cake, but that she couldn’t find a decent one in all of the Pacific Northwest. She also proceeded to tell me her strict requirements for a cannoli cake—how it must be soaked with rum, filled with mascarpone, include orange, and be speckled with chocolate bits and almonds. In between all of this, I also heard this sweet woman’s entire life story, putting her on hold every so often to check on my cheesecake in the oven, and feeling too bad to tell her that I really should be getting off the phone and attending to my catering order.

Thankfully, she was happy with her cannoli cake tasting, and she hired me.

Now, to her, a proper cannoli cake had to be frosted in whipped cream. But, I’m sorry—that wasn’t able to happen with a huge, 5-tier version, in the middle of summer, being transported an hour and a half away. She got a buttercream exterior, but she fought me on it every step of the way. I made her a small, whipped cream-frosted version just for her at no charge, and told her that she’d been warned if it melted. She told me she’d eat it on the drive there, and we were both happy. 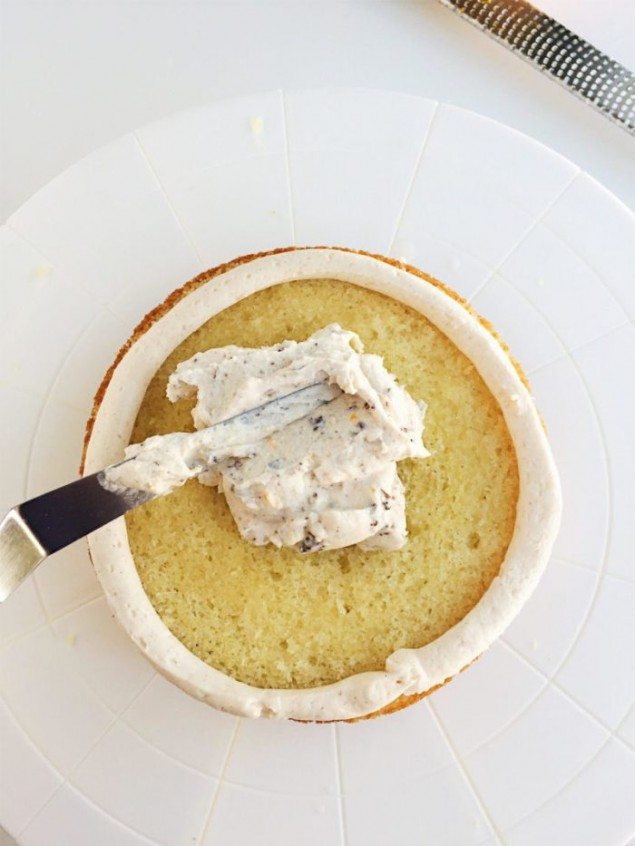 This delicious Cannoli Cake is composed of layers of a rich, vanilla-scented buttermilk cake that I’ve adapted from Nick Malgeri. It’s then soaked with a rum simple syrup and filled with a mascarpone and ricotta cannoli cream that’s spotted with dark chocolate.

An orange and cinnamon buttercream ices the outside, before being glazed with a rich chocolate ganache and studded with almonds.

Is it just me, or does rum and chocolate make any cake that much better? 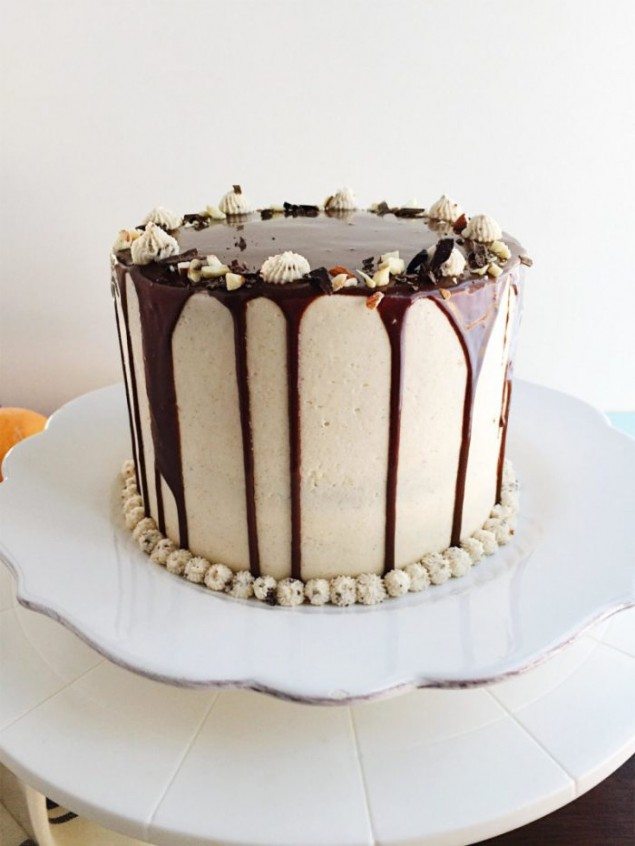 Print
Prep Time
25 mins
Cook Time
30 mins
Total Time
55 mins
Rum-soaked vanilla buttermilk cake layers are stacked up with creamy ricotta and mascarpone cannoli filling and coated in a cinnamon and citrusy buttercream before being glazed with rich chocolate ganache. We're in dessert heaven.
Author: Tiffany La Forge
Recipe Type: Baking, Cake
Serves: 10-12 servings
Ingredients
For the Cake:
For the Filling:
For the Buttercream:
For the Rum Soak:
For the Ganache:
Instructions
Make the Cake:
Make the Filling:
Make the Buttercream:
Make the Ganache and Syrup:
Assemble the Cake:
Notes
It's important that everything is room temperature for this cake recipe to ensure that your batter does not break.
*Drain the ricotta in some cheesecloth before adding to the cannoli filling to get rid of excess water.
3.2.2885