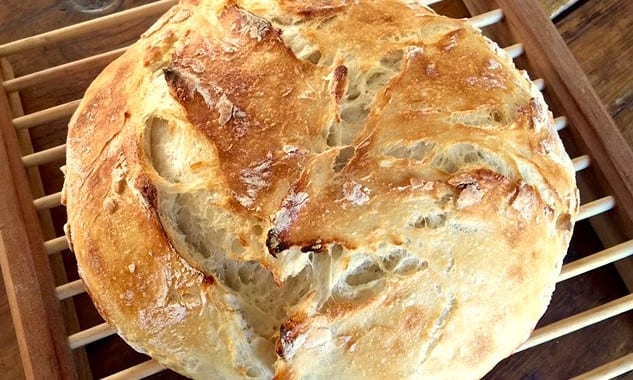 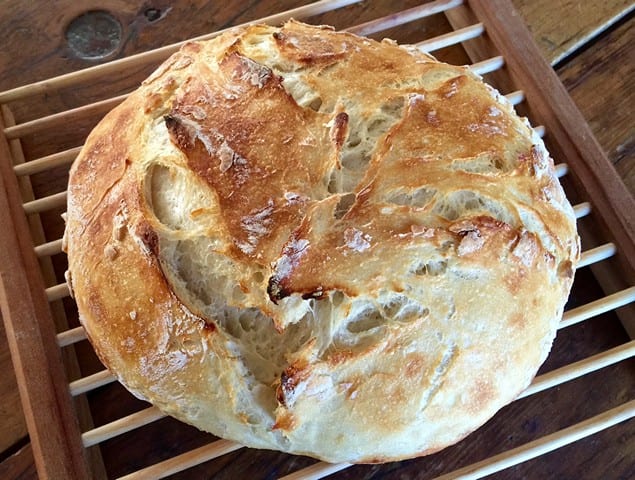 There’s no better breakfast than a thick slab of homemade bread. For me, anyway. Dense and chewy whole wheat or light, airy ciabatta, I love it all—as long as it’s made with high quality, unadulterated ingredients. 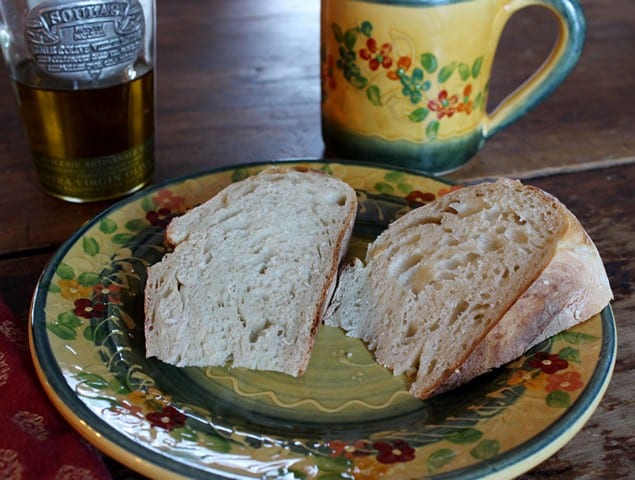 I used to bake bread back before Chris and I had kids, but then it became one of those things that was edited out. Not to mention that we’re fortunate to have five artisanal bakeries within about a 15 mile radius of our house. So I’ve never lacked for good bread. But a few months ago we were over at our friend’s house for dinner and were served homemade sourdough bread. With its toothsome crust and complex, moist crumb and the distinctive sourdough tang, we both couldn’t get enough of it.

On our way out the door, Maggie gave us a scoop of her sourdough starter in a jar. The instructions seemed pretty simple: keep it in a big, glass bowl in a warmish place in your kitchen and feed it every day with flour and water. Easy enough. Chris agreed to feed it every morning, and I would be in charge of making the bread.

With 1¼ cups of flour and water added to it every day, the starter rapidly grew. Bubbles from the fermenting wild yeast erupted on its surface, and the bowl emitted a pungent, yeasty aroma. 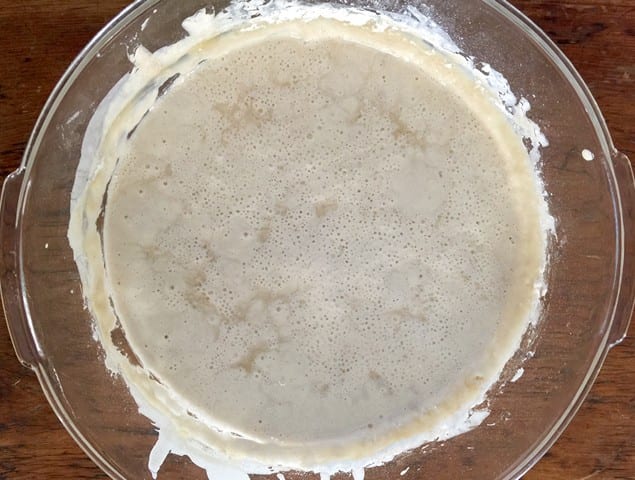 Sourdough bread is, after all, bread that is made with natural yeast drawn from the environment in which the starter resides—bread with terroir. No need to add yeast to the dough, but what you do need is a little more time and patience to get it right. 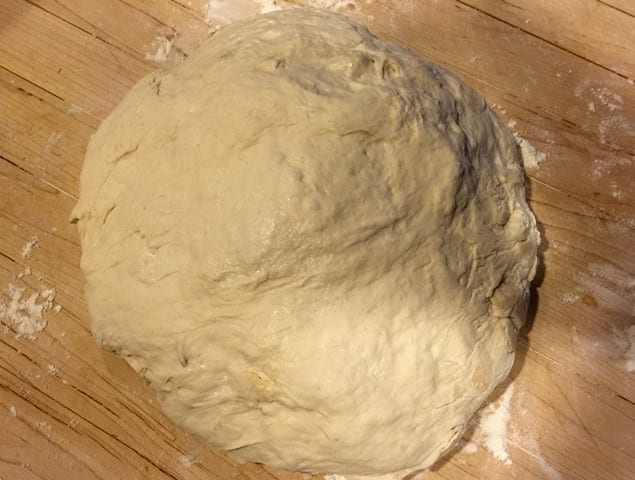 I set out to make bread once a week, a seemingly reasonable amount of bread for our family of (now) three to consume. I love bread, and would even go so far as to say that it’s one of my three favorite foods.  I eat it every day, trying to limit myself to having it only in the morning which, if it’s an excellent bread or bagel, satisfies me for the rest of the day. 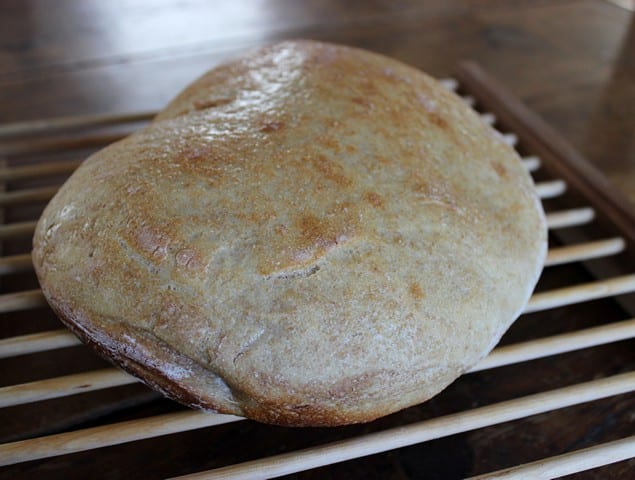 A few years ago, I made a failed attempt to go gluten-free. I really don’t know what possessed me. I lasted a mere few weeks. Fortunately I have no medical need to go without gluten and have been happily scarfing it down ever since (no offense intended to the many who successfully live gluten-free due to medical reasons or personal choice; it just didn’t work for me).

Now that we had some live starter and I was back to making bread again, the house filled in the early hours of the morning with that incomparable aroma of freshly baked bread—to me, one of the best smells in all the world. I would pull the bread out of the oven and cut into its golden crust, allowing the bread’s steam to further warm up my wintry kitchen. Slathered with fresh butter or drizzled with a rustic olive oil, a slice or two of this bread was a breakfast fit for a peasant or a queen.

Sometimes I like to mix it up by making an avocado toast, or melting some cheese over top. Raclette is a favorite for its meltability and meatiness. It stands up especially well to a hearty whole wheat loaf. 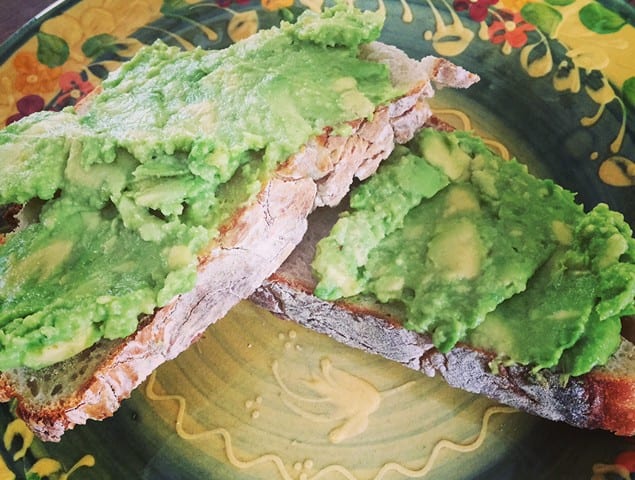 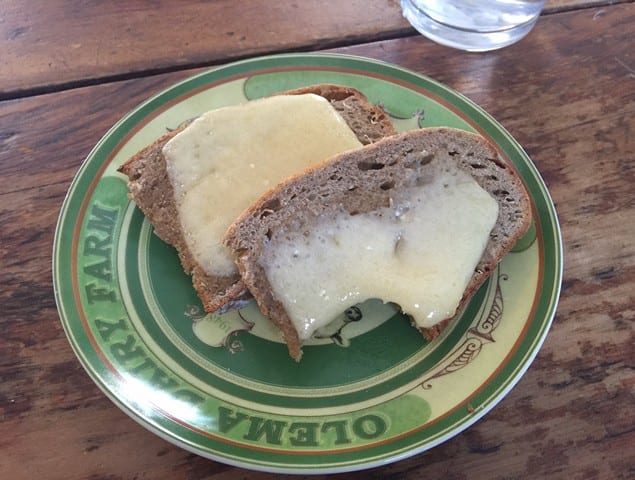 Part of the fun of making bread is experimenting with different flours. In addition to white and whole wheat, I tried a seven grain mix, oat flour, and a fine Italian style flour that makes an airy focaccia. My kitchen turned out a lot of bread this past winter.

But if you do the math, making bead once a week—which entails using one cup of starter—leaves you with a lot of starter sitting on your kitchen counter if you’re feeding it every day as you’re supposed to. Chris was diligent about his job, so the starter grew. It grew and grew, threatening to spill out over the edge of the bowl and creep across the kitchen counter. I began calling it The Beast and gave it away to friends and to my daughter’s friends, spawning Baby Beasts throughout Vermont. I started baking bread twice a week and freezing it. But eventually I threw up my hands. Too much starter! Too much bread!

The Beast had to go. With a mixture of sorrow and relief, Chris and I scraped the starter into the compost bin, its bubbles giving out their last gasps. We reluctantly sucked in our muffin tops and vowed to cut down on bread and hit the gym a few extra times each week.

Only now that we’ve finished up the last of the bread I had frozen am I beginning to feel some regret. I’m considering asking Maggie if she has any more starter she can spare (which I’m guessing she does, remembering the enthusiasm with which she passed on a portion of hers to us). 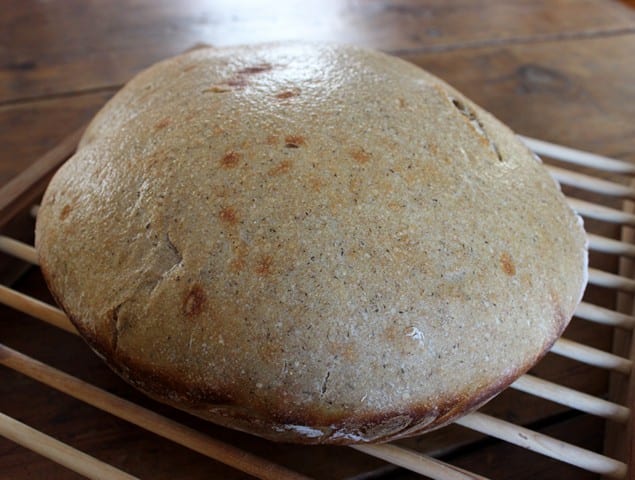 Print
This recipe creates one large round loaf of white sourdough bread. You can substitute different flour or use a combination of flours (such as half whole wheat, half white), or shape the dough into rolls or smaller loaves, for variety.
Author: Sheila McGrory-Klyza
Recipe Type: Bread
Ingredients
Instructions
3.2.2885