There are many ways to fry artichokes, but according to Italian 19th century writer Pellegrino Artus, the Tuscan method is unsurpassed.
By Rita Banci 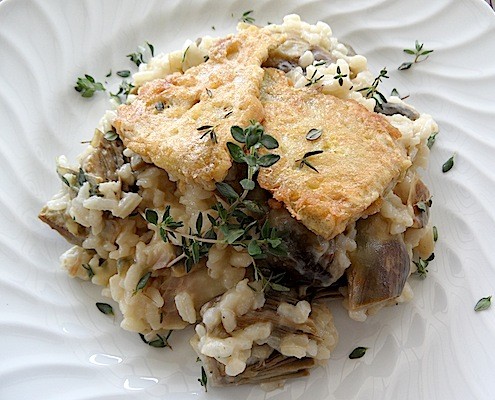 When, wandering about markets, you bump into boxes of artichokes on sale, well, you know it’s officially Spring. No vegetables – except maybe peas – are more related to Spring than these sharp-scaled, thistle-like, prickly dark green buds. Artichokes can be cooked in many ways – boiled, roasted, stuffed, sliced for a frittata, even pickled – but “their death”, as we say in Tuscany, is either fried or in a risotto, meaning that there are no other ways better than these to make the finest use of artichokes.

No doubt artichokes and risotto are like two peas in a pod (we’re in Spring: can we help talking about peas?). On the other hand, even slippers taste good if fried (“fritta è buona anche una ciabatta”), as we say here in Tuscany, and fried artichokes are no exception; hence the idea of combining the two of them in the same dish.

The making of risotto – and those who are a little familiar with its preparation will agree with me – is quite a standard matter. One can easily assert that once you know how to prepare a mushroom or an artichoke risotto, you can make risotto with any vegetable your creativity suggests.

However frying artichokes is slightly different. There are many ways, involving regional and personal variations, to fry artichokes, but according to Italian writer Pellegrino Artusi, one of the most authoritative voices of the boot-shaped peninsula in the cooking field, the Tuscan method seems to be unsurpassed.

“This is a basic fry”, Pellegrino Artusi wrote in 1891, “but strange as it may seem, not everyone knows how to make it. In some places, they boil the artichokes before frying them, which is not a good idea. In others, they first cover them in batter. Not only is that not necessary, but it takes away their natural flavor. Here is the method used in Tuscany, which is the best. Tuscany is the region, where by dint of using and abusing fruits and vegetables as much as they do, they end up cooking them best.”

Artusi wasn’t of Tuscan origin. He was born in 1820 in Forlimpopoli (a small town in Emilia Romagna, another Italian region renowned for its famous culinary traditions), but he spent most of his life in Florence, where he eventually died in 1911. A fine gourmand and a literature enthusiast, Pellegrino Artusi gathered many recipes (790 to be precise) during his frequent journeys.  He had these recipes meticulously tested by his personal Tuscan cook and ultimately managed to publish them in 1891 in his masterpiece cookbook “La scienza in cucina e l’arte di mangiar bene” (“Science in the Kitchen and the Art of Eating Well”, here in the English translation by Murtha Baca and Stephen Sartarelli). Though I cannot claim his statement on fried artichokes to be completely true, surely Artusi’s method – that he had learnt during his long sojourn in Tuscany – is undoubtedly a very good one.

Here’s the method explained in his own words:

“As an example, take two artichokes, remove the tough outer leaves, trim off the sharp ends, cut off the stems, and slice in half. Then cut the artichoke halves into wedges, or to be more precise in slices, about 8 to 10 of them for each artichoke, even if they are not particularly large. As you cut them up, toss them into cold water. When they are quite cold, take them out of the water and blot them or just squeeze dry, then dredge them immediately in flour which will stick well to them.

Neat the white of one egg until half-stiff, one egg being enough for two artichokes; then combine the yolk and the white, and salt. Put the artichokes in a colander to shake off the excess flour. Then drop them in the egg, stir and allow to sit a while until they absorb the egg. Place the pieces one at a time in a skillet sizzling with oil. When they have turned a nice golden color, take them out and send to the table […].” Sounds scrumptious, doesn’t it?