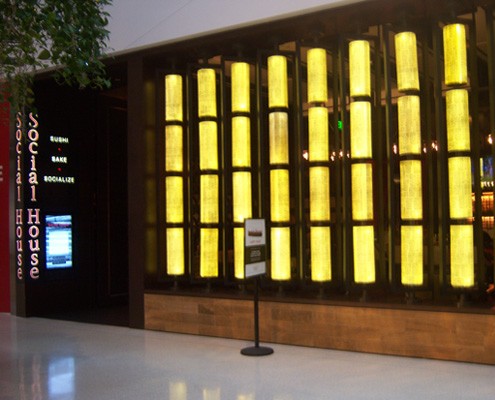 Have a Coffee Break in Italy

In Las Vegas, Bill finds a fancy sushi operation that takes their coffee seriously too.
By Bill Walsh

Vegas is definitely a land of where appetites fare strongly. Between the buffets, endless oceans of gambling and the various shows, there’s plenty to take in.

Yet for all of their indulgent opportunities, Las Vegas is but beginning to blossom with their quality coffee scene. As I mentioned in other posts, only years ago there was not one decent place to grab a well-prepared coffee. But slowly, different places are opening up.

In my online perusals, I had heard of a sushi place serving great siphoned coffee called the Social House, located all to conveniently at the Crystals on the Strip. The unfortunate part was that as an upscale sushi venue, they did not open until 5 pm and so it took a pre-dinner miracle to make it over for some coffee.

Walking in, I confirmed that it’s clearly a restaurant aiming more for customers seeking a classy night scene versus a park-with-your-laptop coffeehouse. Amidst the suave Asain decor, the coffee bar was located off to the one side unmanned. Fearing they weren’t serving coffee, I approached the hostess and asked how I would go about obtaining some coffee, to which she said she would need to track down a specific gentleman (I don’t recall his name) and sure enough 5 minutes later he arrived and the adventure began.

I admit that when I had heard that the Social House made a good siphoned coffee, I was hesitant as I had been to Asian restaurants that served siphon coffee to keep with cultural trends. But after examining their choice of beans (True Beans Coffee Roasters), their expensive halogen/siphon set-up similar to the one that had made a big splash in CA in 08 and the barista’s knowledge/performance, I quickly began seeing a lot more potential in this unassuming coffee bar.

I ordered their Ethiopian Harrar via siphon and a doubleshot of the True Espresso blend. The barista navigated the siphon operation smoothly and poured a cup smacking of wheat, blueberry, caramel, almond, cocoa (which increased as it cooled) and a touch of grass within a medium body (scrumptious). The espresso, pulled well with a marbled crema, displayed notes of bright chocolate-covered cherries, ginger and jasmine, all in a nice balance (a surprisingly good spro). They serve also a vast assortment of teas.

Leave it to an upscale sushi joint with no morning hours to be the coffee star of the Strip. If you happen to be near the Crystals and in the mood for a great evening coffee, stop by the Social House.