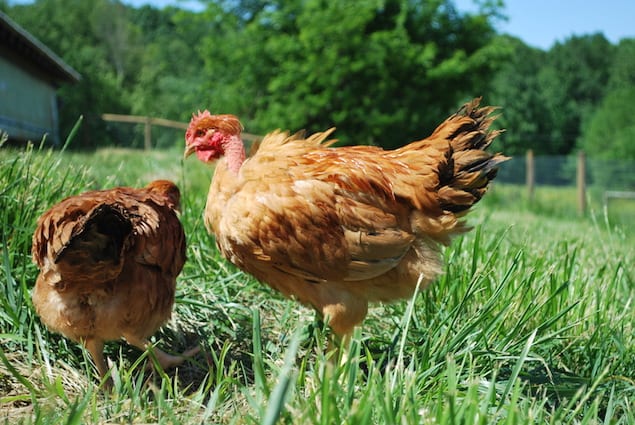 Not all chicken breeds taste the same and while most poultry sold in stores today is bland meat, we wanted a bite of the heritage breeds with supposedly better flavor and a bigger story.
By Annelise McAuliffe

A heritage breed with their characteristic “naked neck” look.

Chicken is a more affordable meat that has flooded social media lists touting the “quickest dinners in thirty minutes or less”, and most home cooks find it to be approachable and easy to prepare. While it is no wonder that we may think of chicken as being versatile and nothing special, it doesn’t mean it can’t be special. Chicken is chicken and all chickens are created equal, right? Not exactly.

We talked with Ryan and Stuart Joyce, brothers and third generation of the family operation, Joyce Farms to get the low down on chicken breeds and flavors. Chicken wasn’t always something grown in confined spaces to be enormous and with little flavor. While this last characteristic has become a way for cooks to impart any flavor they choose to a chicken dish, we wanted to find a bird with a little more life, pizzaz, and personality.

According to bird experts, Ryan and Stuart, the biggest difference between the chickens of yesteryear and many of the birds we find in stores today comes down to plain and simple genetics. For example, the Joyce brothers noted that in 1925, commercial farming really took off and chickens coming from these farms weighed about two and a half pounds after about 112 days. However, the majority of chickens today make it to our meat counters after only 47 days and weigh over six pounds. In just over a month and a half we have enough protein to feed a family of four, hence the lower prices associated with chicken. But how can that super-growing chicken’s flavor be anything but ordinary in that short amount of time? Ask any chef how he creates a full-flavored, melt-in-you-mouth meat dish and he or she will most likely respond, “low and slow, it takes time”. Just like slow cooking recipes or braising to create rich flavor overtime, a chicken needs that same long period of growth for it to have delicious flavor. Top chefs such as Frank Sitt, Sean Brock, and David Chang have all requested heritage breeds, like the ones Joyce Farms raises, in their restaurants, where rich flavor is key.

“American’s generally know the difference between tuna and salmon. However, when it comes to chicken, we’ve only had one breed for so long – a standard white feathered chicken. It’s interesting that whether you pay a premium for an organic bird at a gourmet grocery store, or buy a bucket of chicken at a local drive-through, you’re buying the same breed of chicken. So we’re trying to change that mindset.” 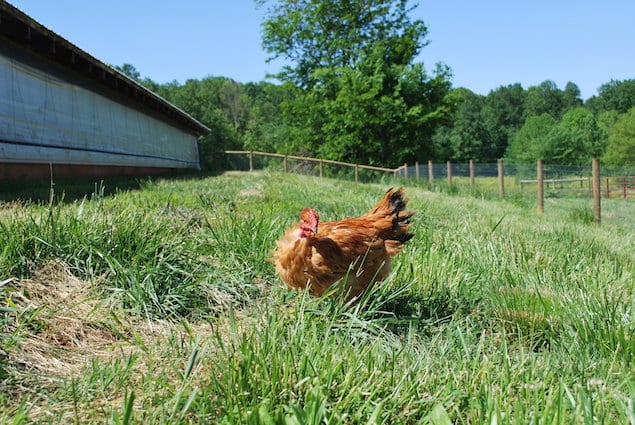 When Ryan and Stuart’s father, Ron, took over took over Joyce Farms from his father in 1971, he was tired of boring chicken and set out to change the family’s ideas about what the bird should taste like. Changes were set in place and by 2001, Joyce Farms raised only heritage chicken. An exploration of one of their breed’s family trees, the Poulet Rouge, would take one straight to France where the bird is from. This slow-growing bird takes 84 days to reach three pounds of tender, flavorful meat. Because the bird takes longer to grow, the layer of fat that is often found under the chicken’s skin ends up being marbled throughout the meat in a Poulet Rouge. The family imports their eggs from France and then hatches them here in the States to build their flock and be in control of the whole breeding process. Surprisingly, once in the US, the bird’s French heritage and taste is not immediately lost. They have chosen to also raise the birds according to the Label Rouge Standards of France. In other words, a Poulet Rouge eaten in France should taste just like one eaten here.

Besides flavor is there any advantage to raising Old World birds? We can’t deny that, to us, flavor is everything, but we do understand that time is money and being able to raise a chicken at minimal cost is an important factor. However, is it interesting to know that Old World breeds tend to be heartier, healthier, and in turn happier than chickens raised on large factory farms. Not only do these breeds have better genetics to fight disease and infections, but they are allowed to roam free outside once they are six weeks old. A healthy bird is more likely to be a tasty bird. The Poulet Rouge is not the only bird Joyce Farms raises, nor is it the only one with great flavor and ease of cooking. Today, the family grows a handful of Old World poultry breeds as well as a flavorful grass fed beef.

Is cooking an Old World bird different from any other chicken? It seems that cooking with a flavorful breed of poultry could be even easier than the traditional grocery store chicken we are used to. Since most of the flavor is already bred into the meat of the bird, all it really needs is some simple salt and pepper seasoning before being baked at 350°F to simply enjoy its unique flavor. However, it can be used seamlessly in any other chicken recipe, just expect a more tender and flavorful end result as the fat integrated into the meat melts and flavors uniformly.