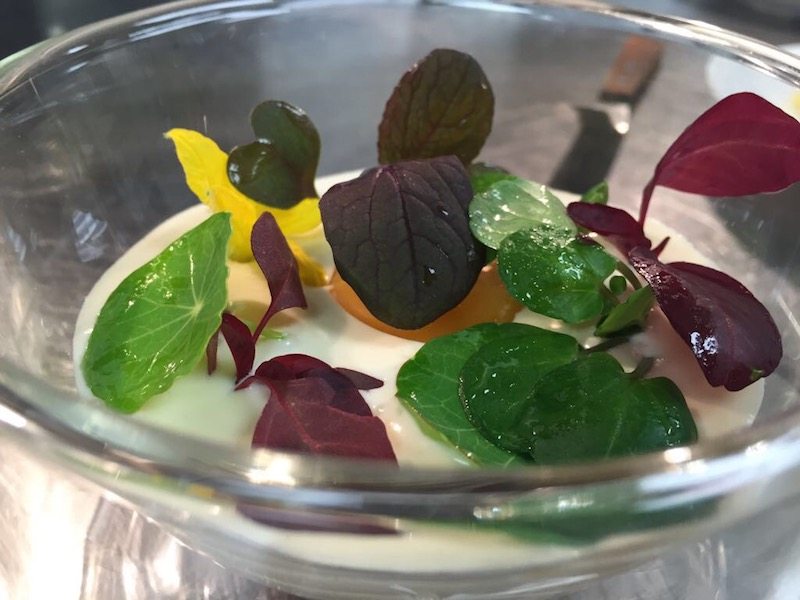 Michelin-star restaurant Edvard located in the Palais Hansen Kempinski has an award winning chef with a rather unique recipe for gourmets.

Chef Norman Etzold has been the Chef De Cuisine since May 2017 and although works with a very seasonal menu the Sot-L’Y-Laisse is his signature dish which stays on the menu.

Known affectionately as the chicken oyster, the history and culture behind this French dish is interesting and unique – putting a spin to your regular ‘chicken’ dinner.

The award-winning restaurant, Edvard says — Sot-l’y-laisse  — “A fool, who cold-shoulders it”, that means sot-l’y-laisse translated from French. That is, because the chicken oyster, as it is in English, is said to be the best piece of the chicken. The two small, filet-like pieces of meat lie in the back above the lobes on both sides of the spine. The Sot-l’y-laisse has a darker colour and a more intense aroma than breast or club meat. Its particularly delicate, juicy consistency is not lost even after prolonged cooking, so it can be both stewed and braised. The fine piece of poultry is particularly popular in France, Belgium and Luxembourg, but the Sot-l’y-laisse has also been rediscovered in the German-speaking top gastronomy. The sot-l’y-laisse is always on the menu in the Edvard as it is our signature dish – but our kitchen interprets it according to the season and makes it a new culinary experience every time.

Sot-l’y-laisse at Edvard/ Palais Hansen Kempinski Norman Etzold, chef de cuisine at Edvard and Palais Hansen Kempinski, got to know the chicken oyster about 7 years ago when he was working at restaurant ‘Villa Rothschild’ in Frankfurt. Norman especially likes the fine taste and that you can make good stews with it. The sot-l’y-laisse goes very well with stronger sauces and stews because of its soft texture.  Norman is especially fond of his recipe for sot-l’y-laisse because you have all essential flavours in just one scoop.  And by just changing a few ingredients you’ll have a totally new dish. Norman e.g. added truffles or macadamia nuts to the basic recipe. He especially emphasizes the quality of the ingredients. You can only cook perfect dishes if you have the best possible ingredients, so they are chosen carefully for every dish. Norman also likes the guests’ reactions. Some guests are real fans of the sot-l’y-laisse and order it as a starter and a main course.

Have you heard of Sot-l'y-laisse? Chicken Oysters?