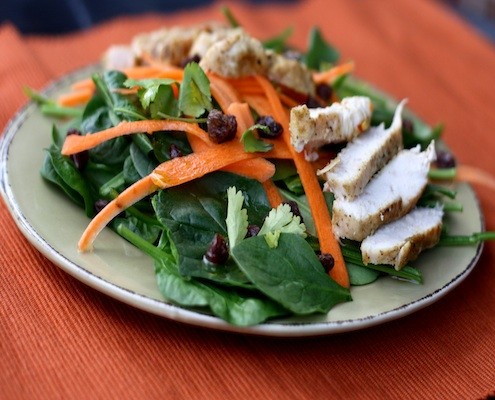 It’s fitting that this recipe comes from Real Simple magazine, as it is indeed real simple! Lucky for me, because the day we had this for dinner I was absolutely starving and in no mood to putz around in the kitchen! My only disappointment in this meal came when I opened the crisper drawer in my fridge only to find a rather sad looking bunch of cilantro. We used what we could of the herb, but I don’t feel like we got a true taste of what the cilantro does to the taste and flavor of this main-dish salad. I plan to try it again, fresh cilantro included, soon. But if you don’t like cilantro or don’t have much on hand, I can attest that this salad was a win without it.

The dressing has a nice little kick from the crushed red pepper, but it’s such a small amount that the flavor doesn’t overwhelm with every bite. I haven’t put raisins on salad in a long time (typically my salads include craisins), but I welcomed the slightly less sweet dried fruit. The various elements of the salad worked well together and both my husband Ryan and I were pleased with the outcome. Eaten with some crackers or whole-grain bread, this makes for a healthy, wholesome lunch or dinner!

1. Heat 2 tbsp oil in a large skillet over medium-high heat. Season chicken with cumin, 1/2 tsp salt, and 1/4 tsp black pepper. Cook chicken in batches until golden brown and cooked through (approximately 2 minutes per side). Remove from skillet and cut into strips.

3. Toss chicken, spinach, cilantro, carrots, and raisins with the dressing in a large bowl. Divide amongst plates.

Coffee Steaks Under The Influence