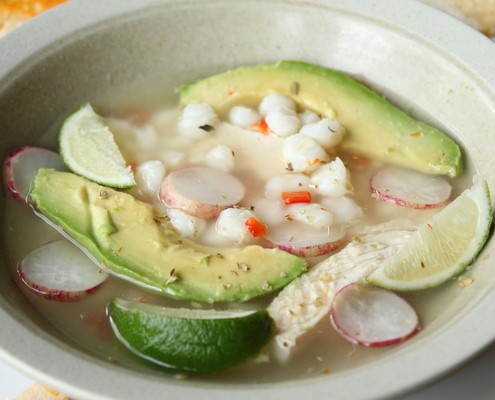 Pig Of The Week – An Industry Telling Porkies

A traditional Mexican soup that, like many other soups, will only taste better the longer you let it simmer.
Text And Photos By Kelsey Hilts

Pozole (also commonly spelled posole) is a traditional pre-columbian Mexican soup made with hominy and meat, such as chicken or pork.  Hominy is a form of dried whole corn kernels that have been soaked in lye.  Canned hominy can be found in most grocery stores in the vegetable aisle or in the section with Mexican ingredients.

Depending on the region and the chef there are many variations of pozole, some with salsa verde or enchilada sauce added to the soup broth and others with a combination of meats and peppers.  Traditionally the soup can take a long time to prepare because it can simmer for hours.  This version which comes from my world-traveling friend uses chicken breasts and comes together quickly, but the longer you let it simmer the more the flavors will develop.  In my opinion, it is all of the garnishes that “make” the soup, adding color, texture and a myriad of flavors to each spoonful.