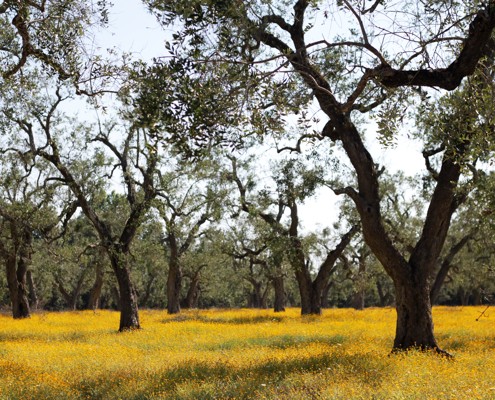 Emiko Davies explores the cool earthiness of an underground olive oil mill and the fruity explosion of sun-soaked wines as they come together in Masseria L’Astore, a traditional estate in Salento, Puglia.
By Emiko Davies

The deep south of Italy’s stiletto heel, Salento, feels a world apart. Geographically cut off from the rest of Italy and squeezed between two seas, it is the stub of a peninsula within a peninsula. In the widest part of the “heel,” the drive from the Ionic coast to the Adriatic coast takes little more than an hour. It’s tip, Santa Maria di Leuca, feels like the end of the world.

The landscape even changes when you reach Salento, with its turquoise sea and dry lands dotted with often abandoned masserie (the traditional, fortified farmhouses), and interspersed with recklessly baroque towns layered with the ancient influences of those who have conquered and those who have passed through. The land is dry but fertile and it is here where some of the finest olive trees and vineyards in the country are grown.

One of those scorching hot June days, where even the lizards are too lazy to come out to play, we set out through the lands of the ancient Grecia Salentina to Cutrofiano in search of Masseria L’Astore. A traditional fortified farmhouse, they make some wonderful specimens of the rich array of local wines and olive oil. We had come across a bottle of L’Astore’s Aglianico blend the night before at dinner – earthy, like the rust-red soil of Puglia with the perfume of dried fruits like prunes, dates and raisins, over-ripened in the hot Salento sun – and we were hungry for more.

Unlike some of the empty, sad stones that remain of the abandoned farmhouses nearby, the bleached white fortress-like Masseria was carefully restored by the Benegiamo family who have owned it since the 30s. 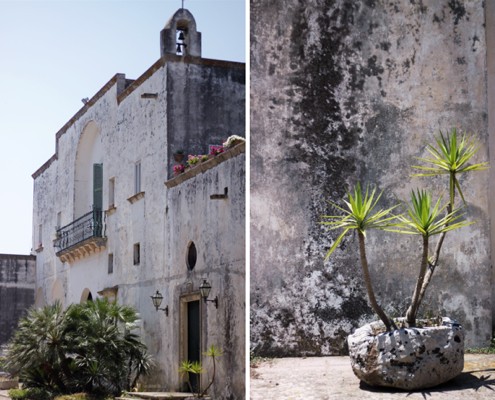 The grounds include a chapel and an incredible frantoio ipogeo, an underground olive oil mill. These structures were not uncommon in Salento – on the island of Gallipoli alone there are no less than thirty-five of these mills, hand carved out of the rock and soil below noble palaces.

The frantoio at Masseria L’Astore is beautiful and unbelievably well-preserved. With parts dating back to the 16th century, the underground mill is testament to a unique part of the history of this land and its traditions. A staircase that could be worthy of nobility rather than farmers leads underground where the sudden drop in temperature is a welcome relief from the hot late morning sun. The stairs lead to what looks like the nave of an underground cathedral, complete with surprisingly tall, vaulted ceilings. At one end of the “nave” is the stable. Entirely carved out of stone including the feeding troughs, the stables were home to the animals who kept the wheels in motion, so to speak, for the entire olive oil making process. At the other end is the “transept” where two huge stone grinders with their giant wheels for crushing olives now sit silently with the well-worn tracks of the blind-folded animals carefully preserved in the stone floor. Several rooms to the sides held the vats for olives that were dropped in from above and a series of wells held the precious oil as it was pressed out of the olives. It is a suggestive setting, somewhere between Indiana Jones and the crypt of a Byzantine cathedral. 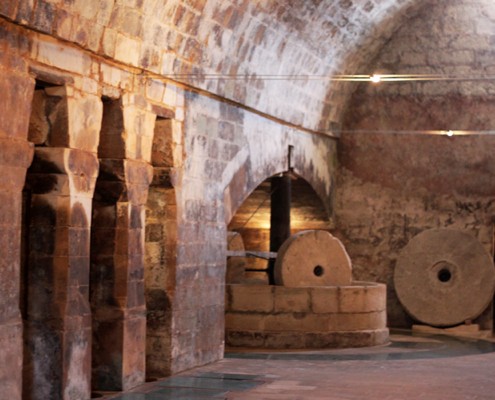 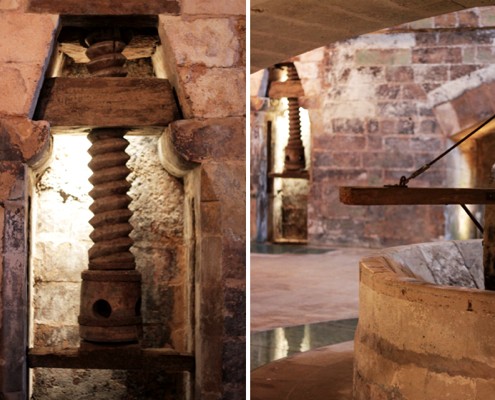 Along with their organic extra virgin olive oil, L’Astore also produce some of the best sun-soaked wines traditional to this corner of Italy, Negroamaro and Primitivo, two grapes robust enough to do well in heat and drought. The name ‘Negroamaro’ comes from the two words of the most important languages of the region, Latin and Greek, meaning “black” – in no simpler way could you identify the deep colour of this wine, and the night-tinged colour of its dark violet grapes. They also produce a pure rosé from this grape, which they grow organically, known as Rosato di Negroamaro – a vibrant wine the colour of diluted blood.

Primitivo, named after the fact that the grapes grown under the scorching sun of Salento mature much earlier and are therefore harvested early (primo means ‘first’), may also be familiar to some as Zinfandel. It’s a rustic, explosively alcoholic wine that gives away the heat of its native terroir. Until recently, it was traditionally made to export to northern Italy and France to blend with the local grapes that did not have as much sugars as the sun-drenched southern grapes.

The most intriguing of the wines produced at L’Astore is the Alberelli 1947, named after the “tree-like” vines of negroamaro that were planted on the property over 60 years ago. The curious gnarled branches of the vines, grown to look like miniature trees, were saved from being uprooted and brought back to life to create this singular wine.

In this place that cannot escape its dry land and hot climate, that pulsates with its ancient traditions, L’Astore’s wines and oil are a salute to Salento, a taste of the deep south.