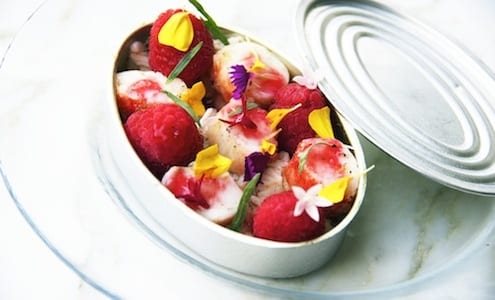 Is there anything new under the Miami sun in terms of food? After visiting The Bazaar in South Beach and tasting food that actually makes you think about the taste and the feelings that arise with each mouthful, you know that something innovative is happening in this cosmopolitan city.
By Brenda Benoit

The SLS Hotel, where The Bazaar is located, has a lobby that is not the typical one for a hotel. Instead of a front desk, you are welcomed by an array of restaurants and open kitchens. At the end of this delicious hallway filled with enticing smells, is The Bazaar by José Andrés.

The restaurant itself offers indoor and outdoor seating, the décor inside sober and elegant, the outside, colorful and whimsical. It was a cool and breezy Miami afternoon, so we sat outside. 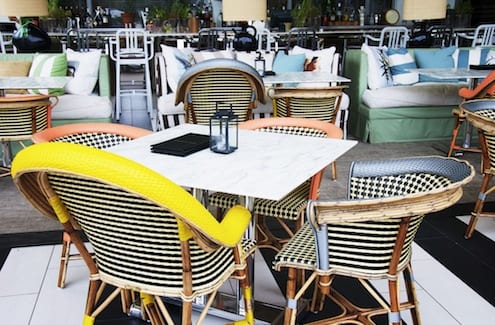 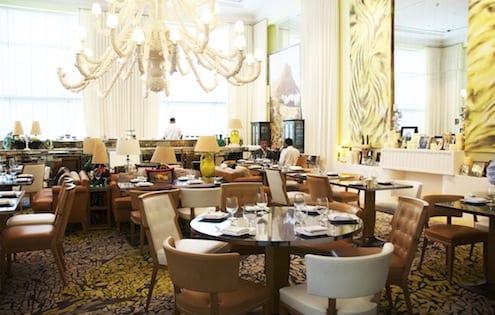 The Bao con Lechón, made with a Chinese bun and pork belly looking like an ordinary slider but one bite was all it took to realize that something special was happening. Nothing can prepare you for the divine sensation of the tender pork belly sliding sweetly down the throat enveloped by a golden, brown, slightly toasted bun. Bao is also know as Baozi is a type of steamed, filled bun or bread-like (i.e. made with yeast) item in various Chinese cuisines.

The Cubano was a little sandwich that honors the heritage of Miami but with a twist and made with ibérico ham, Swiss cheese, mustard and pickles. Ibérico Ham is also know as Jamón ibérico or pata negra and it is a type of cured ham produced mostly in Spain.  The secret was in the espuma (foam) inside: it oozed gently from a crackling balloon of bread. This was a sexy sandwich: all crisp, slighty-salty on the surface and inside creamy, topped with sweet little chunks of pineapple and a mini garden of greens. Warning: if you are not careful it ends up on your chin and clothes, but it was well worth it.

The Kueh Pai Ti was a little surprise in a cup filled with shrimp, peanuts and chili sauce, the cup almost reminiscent of a tiny ice cream cone but with a savory filling instead.

They were so many small plates here; it was hard not to try them all. The menu includes more than 60 plates that are best shared. We tried the Almond Tomato granite, the Cuban Escabeche “Estefan’s Way”, Dragon Fruit Ceviche (made with tuna, pecans, lime and hibiscus), Yuca Churros served with peanut butter and honey, Patatas Bravas which were fried potatoes served with spicy tomato sauce and aioli…the wonders never ended.

The most intriguing and provocative dish was the King Crab raspberries. Why? Because it was served in a can. Spain is well known for producing high quality canned goods and even though the dishes are made fresh daily, presenting them in a can is a tribute to Spain’s groundbreaking practice. The dish was so beautiful that I could not stop taking pictures. My dining companion, this time my daughter Issa, almost hit me over the head because she wanted to taste it. The combination of crab and raspberries may seem odd, but actually was a perfect pairing of flavors…and with pretty little flowers on top. Who can resist that?

For dessert?  A Banana Mojito, basically a Mojito sorbet with mint and caramelized bananas. To use a banana skin as a container was just so unusual and cute! Yes cute…just looking at it before even tasting it made us chuckle with delight.

The service was above par – attentive, warm and knowledgeable. Each dish was explained in detail once served and this essential when the plates are not what one encounters in most restaurants in Miami.

A chat with Chef José Andrés, who was named Outstanding Chef of the Year at the 2011 James Beard Awards, says a lot of what goes on in his mind when creating his dishes and choosing what city to open his next venue.

Why open a restaurant in South Beach? What dishes were created especially for the Miami market?

Miami for me is a very special place so when Sam Nazarian and I talked about bringing the SLS to Miami, I knew it would be an amazing opportunity and with Philippe Starck’s creative design, we could create an exciting and re-imagined Bazaar in South Beach. My culinary team and I were really inspired by the mix of flavors, art and cultures of Miami.  So when you look at the menu, you will see the local Latin and Caribbean flavors with a touch of Spain and Asia. All of these influences inspired me to create unique dishes like Bao con Lechón an amazing Chinese bun with pork belly so tender that it falls apart. And I love the Creamy Coconut Rice which we serve in a beautiful coconut shell. Also Miami has some of the best Cuban sandwiches ever so we created our own version of this sandwich, called ‘Cubano” as homage to the classic, which is made with the best ibérico pork, a light air espuma, fresh cucumber and mustard.

I see that the menu at The Bazaar has many Asian elements in it and that this inspiration comes from Singapore, where did the idea of mixing Spanish, Asian and Miami cuisine together come from?

Often times, food and art can be the amazing connection between cultures. I became fascinated with the Art Deco of Miami and when I traveled to Singapore I saw that Art Deco was also a big part of the culture there.  The SLS Hotel at South Beach is located in an astonishing historical art deco building so I wanted to honor that connection of Art Deco with Singapore in a bigger way.  I traveled to Singapore and Asia to learn about the local foods and help us tell the story of The Bazaar. So that’s why you see dishes like the Traditional Sui Mai Pork, made with the freshest pork, shrimp, and peanuts and the Kueh Pai Ti, which is a very traditional street food in Singapore made using these very interesting cup molds. We saw this everywhere so we knew we had to make out own version. Ours is filled with shrimp, peanuts and chile sauce.

Presenting dishes in a can – is that something that is done in Spain or did you come up with that concept?

In Spain, canned foods are very common and some of the best in the world with products like asparagus, piquillo peppers, sardines, and more.  We started using cans to present dishes when we opened The Bazaar in Los Angeles as a way to celebrate that Spanish tradition. At The Bazaar in South Beach you’ll find dishes of mussels and king crab presented in Latas and Conservas.  It is a fun way that helps me tell the story of my country.

Miami locals are usually picky eaters. Why do you think that Miami is ready to “Meet the World”?

Maybe it’s not that they are picky but I think that because Miami has so many astonishing restaurants, the people expect a lot from you and that’s not necessarily a bad thing. It’s such a cosmopolitan city with people from all over the world and I think that makes people open to so many different flavors.  And I feel like a very lucky that Miami has welcomed me with such open arms.

You are often inspired by dishes made by your Mother. What was one of your favorite dishes growing up?

Some of my favorite memories of my childhood involve cooking at home and going to the markets where we would get the most amazing vegetables, beans, cheeses, and eggs. Growing up I loved Huevos a la Cubana, a humble dish of rice, tomato sauce and fried eggs. Sometimes we’d have a little meat, or fried bananas with it. And now, because it’s such comfort food that takes me back to my youth, we have a version at the SLS Hotel for breakfast.

After dining here, one walks away feeling rich and satisfied and that feeling is something that is never forgotten.