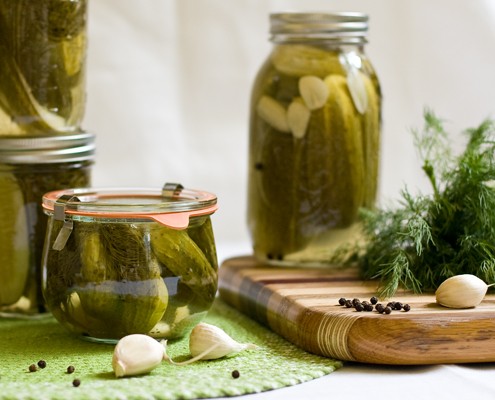 A Twist of Pink and Orange: Stewed Rhubarb

Pickling cucumbers are in the local farmers markets and you know what that means, don’t you? Time to make some dill pickles.
By Laura Davis

When I make pickles I have to hide them from my husband or he will eat every last one before anyone notices.  My family enjoys them but I like to use them in recipes and have them on hand for grilling and barbecues if there are any left.

Here are a couple of interesting tidbits about pickles:

Did you know that dill pickles out sell sweet pickles 2 to 1?  I didn’t, I thought it was the other way around.

Did you know that the word “pickle” was derived from the middle English word “pikel” which was originally was a spicy meat sauce that accompanied meat?  Me neither!  I have read that when it was hard to preserve meats that sauces and spices were used to mask the unpleasant flavor or odor of the meat.  Sounds appealing, eh?

Did you know that pickles played a role in the discovery of America in 1492?  An Italian merchant and explorer named Amerigo Vespucci was involved with Columbus’s voyage and stocked the ship with vitamin C rich pickles.  At the time, a vitamin C deficient disease called scurvy was cause for the failure of many voyages.  Vitamin C is not at its peak levels in pickled food but is enough to prevent scurvy outbreaks which were fatal at the time.  It is also believed that America was named after this merchant/explorer’s name, Amerigo.

Historically in the south and worldwide, preserving and pickling are a way to carry the summer’s bounty into the colder months.  These days it is not so necessary to to can foods because many foods are available year round.  Lets face it, nothing beats making your own jams and preserves, or freezing fresh corn or peas, or making your own dill pickles. I limit my pickling to cucumbers but okra, peppers, watermelon rind, beans, carrots, onions all can be pickled and that is only naming a few.

This recipe uses fresh dill and garlic and is fairly easy as far as preserving or pickling goes. Try to get small pickling cucumbers.  This year it was a half and half mix so I quartered the larger cucumbers into spears.  I have never done this before, I usually leave the pickles whole, so we will see how it turns out.  If you like a little heat to your pickles then drop a couple of red pepper flakes in each jar before filling with the cucumbers.

A Twist of Pink and Orange: Stewed Rhubarb

Baby Potatoes with Dill and Garlic