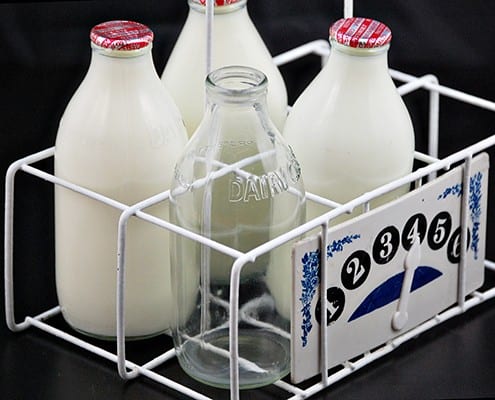 In Britain, it is still possible to get milk delivered to the door three times a week.
By Ruby Moukli

Growing up I never saw a milkman except in the movies. They seemed to be long-extinct in the US, and when we moved to the Persian Gulf the only milk we had was powdered. I guess I just relegated them to the pages of history and didn’t give them any further thought until several years after moving to Britain.

My light bulb moment came one day when I was dropping my children off at preschool and noticed a crate of empty milk bottles by the front door. I would have dismissed the delivery as being ‘for industrial-sized kitchens only’ but the glass bottles gave me pause for thought. Surely if this was a service designed only for businesses with large orders, pint-sized bottles would not be the most convenient or economical option. I decided to investigate further.

Two more things happened that very same week, before I even had a chance to look into milk deliveries, that I would call coincidence if I believed in that. First, I saw a milk float drive towards the dairy farm that lies about a mile from our house. Then, the next day, a milkman knocked at our door soliciting business.

Our local organic dairy had recently teamed up with a national milk delivery company and they were now offering deliveries in our area. How could I not sign up?

And so, for two years now, despite my husband’s swearing never to let me have a milkman (for reasons you can imagine), we have been getting fresh, organic 2% milk delivered in glass bottles to our doorstep three times a week. It arrives early in the morning and has only been stolen once.

There have been hiccups though. Not long ago we learned we were getting a new milkman. He delivered the milk considerably later than his predecessor, left the gate irritatingly open behind him and completely messed up our holiday order. Hubby was growing increasingly frustrated and so we decided to cancel the service and look for an alternative. But once again destiny played a hand…

Despite my sending a strongly-worded email to the company, and despite their responding that they would notify the milkman, our milk kept coming. Either he didn’t get the message or our new milkman is a persistent SOB. But I was secretly pleased. I love that the milk is so fresh, from literally down the road, and that it is delivered, by electric vehicles, in glass bottles that are washed and re-used 20 times before being recycled. And I love supporting a service that was, until recently, on the brink of extinction.

Many factors led to milk delivery going out of fashion. The rise of supermarkets, certainly, but also the invention of plastic containers in the 1960s. They didn’t need to be returned, which meant half of the mikman’s job had become obsolete. It wasn’t until the relatively recent rise of environmental concern, coupled with a resurgent interest in organic foods and supporting local business that the milkman made his comeback. (I should note here that in the UK milk delivery had suffered but never stopped as it did in other places, like much of the US.)

In Britain milkmen have begun diversifying their offerings, in an attempt to compete with the popular organic produce delivery companies. You can now get milk and other dairy products, eggs, bread, and even household necessities like garbage bags delivered to your door. Their service is on the rise here and, I hope, where you live. If you don’t know whether you have a local milkman, look into it – you may be surprised.

As for us, our deliveries have gone back to being earlier again, which is great, and he mostly gets our order correct. When he doesn’t, I just use the extra milk to make yogurt or dulce de leche. And, especially in the case of the latter, it’s nice to be able to blame the milkman!

How to Make Golden Milk

Put These Out for Santa This Christmas