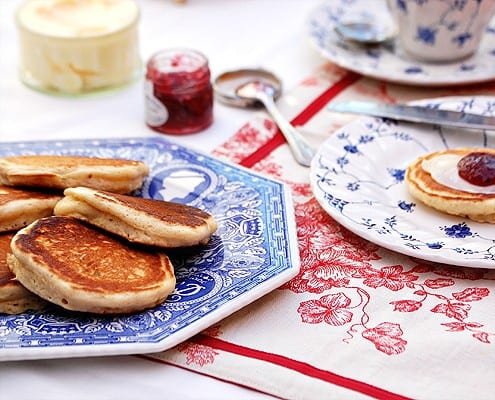 Ruby Moukli serves scones made (almost) as they are at Balmoral, the royal residence in Scotland.
By Ruby Moukli

In Britain, this summer is shaping up to be about two things: the Queen’s Diamond Jubilee, celebrated the first weekend in June, and the Olympics. Of the two, I’m most looking forward to the Jubilee. That may sound strange coming from an American. After all, we fought a war to escape the British monarchy, didn’t we? But Queen Elizabeth won me over one hot day in the Persian Gulf, when she spoke to me fondly of Seattle, my hometown.

As an American girl in a British school I often stood out, but never so much as that February day in 1979. I stood shoulder to shoulder with my British Girl Guide friends, but I was dressed in my American Girl Scout uniform. All of us had had our hair carefully brushed by nervously giggling mothers, our hands scrubbed clean, cheeks pinched to bring out their rosy glows and our knee socks pulled smartly up. Our teachers had spent weeks drilling us on protocol – stand straight, curtsy as she goes past, don’t speak unless spoken to and even then keep to only one word answers followed by Ma’am (rhymes with jam).

And so we stood there, nervously lining the playing field, ready for the ultimate inspection. Finally the band started to play and we caught our first glimpse of Her Royal Majesty, Queen Elizabeth II. I think she was wearing light blue, but I honestly can’t remember because what happened next overshadowed all other memories of that day. It must have been my unique green uniform that she picked out from the crowd. She came towards me smiling and said ‘Hello’. I was supposed to curtsy now and answer demurely. But all those weeks of preparation instantly flew out of my head as my brash American genes took over.

I stood tall and thrust forward my hand to shake hers with a jaunty ‘Hi!’ My teacher, standing behind me, started hyperventilating. Her Majesty asked me where I was from, to which I answered ‘Seattle.’ One word – good. Teacher relaxed a little. Then Her Majesty said “It rains a lot in Seattle doesn’t it.” I was surprised she knew about my hometown. “Yes it does. Have you ever been there?” Sharp intake of breath behind me, teacher very unhappy now.

But HRM wasn’t ruffled. She seemed to enjoy our exchange, perhaps as a refreshing change from the stiff formalities to which she was used in such situations. I gave her a small doll I had brought along for the occasion – it was made from cornhusk by Native Americans–she seemed pleased and thanked me for it before moving down the receiving line. As she paused a bit further along to speak to my younger brother, Prince Philip chatted with me, greatly exacerbating my poor teacher’s distress.

And so we met Queen Elizabeth, and Prince Philip, and grew up thinking that most Brits had also had that pleasure. Apparently not. And, although I was thrilled by the novelty of it, I didn’t quite see it as an honour at the time. When reprimanded by my teacher for not curtseying, I rather haughtily replied “she’s not MY queen.” I’ve softened slightly since then. Even if I still don’t buy into the notion that royals are intrinsically any better than the rest of us, I do think they’re fun to have around, and a great excuse to throw a garden party.

In fact I must give the Queen her due – she makes a lasting impression, and a good one. Another American who met Her Majesty, long before I did, was also quite taken, not only with her graceful countenance and conversation, but with the drop scones she served at Balmoral, the royal residence in Scotland. She later sent him her recipe, and her letter, addressed to President Dwight D. Eisenhower, is now publicly available in the US government archives. 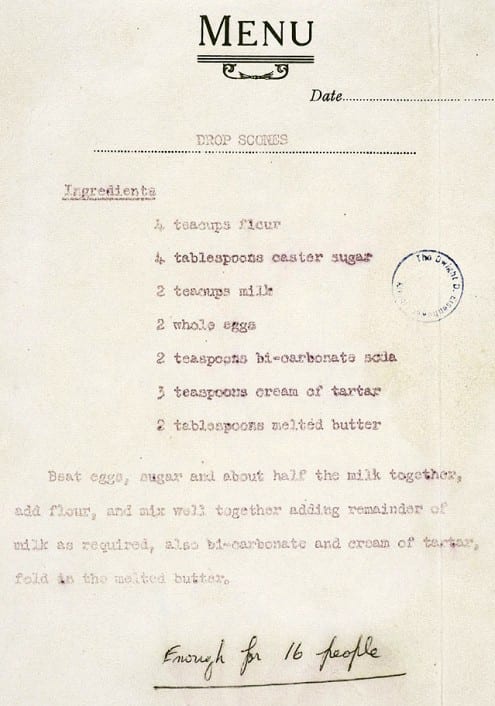 If you’ve ever made American-style pancakes, this recipe will feel quite familiar to you. Drop scones are, in fact, a close cousin, although in Britain they tend to be served as finger food at parties or as a snack. A recipe of royal proportions, I halved it and made 16 scones. Rather than trying to translate her teacup measure into a more standard equivalent, I went with the spirit of the occasion and used a teacup. They turned out just fine. Not having any caster (superfine, in US terms) sugar, I put Demerara in the blender and blitzed it. And if you don’t have cream of tartar, leave it AND the baking soda out and use 2 Tbsp baking powder instead (for the full recipe).

Her Majesty did not include cooking instructions, so here are mine: Heat up a lightly-oiled skillet or crêpe pan and drop a heaping soupspoon of batter on for each scone. You can do about 5 at a time, depending on your definition of ‘heaping’. When large bubbles come to the surface, gently flip them over and cook for a further 30 seconds or so, until browned. 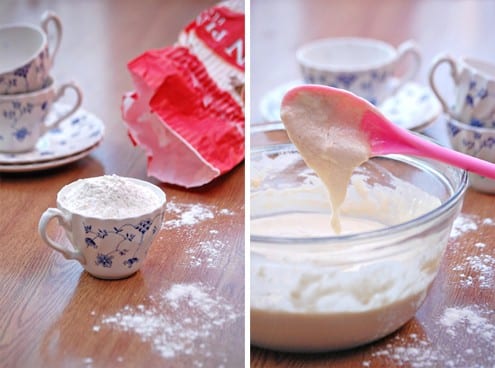 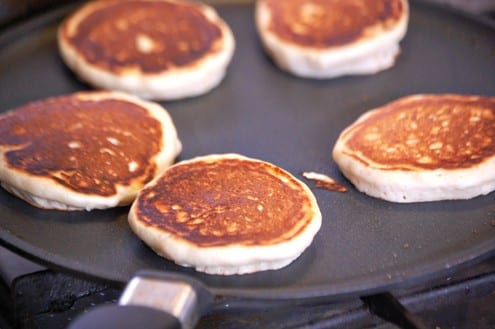 The kids were delighted with them and experimented with every topping they could think up. The favourite was, predictably, Nutella, but a combination of peanut butter and dried cranberries was a close second. I preferred the more traditional schmear of butter and dollop of raspberry jam. They’re great with lemon curd too.

These keep quite well for a few days in an airtight container in the fridge. The children got used to asking for ‘the queen’s recipe’, as they insisted on calling them, for breakfast, and I’d just take a couple out and warm them up in the microwave (10 seconds each). In fact, I think my daughter took the whole ‘queen’ thing a bit too much to heart. Her demeanour was becoming almost unbearably regal, until they thankfully finished the batch and returned to their humble breakfasts of yore. 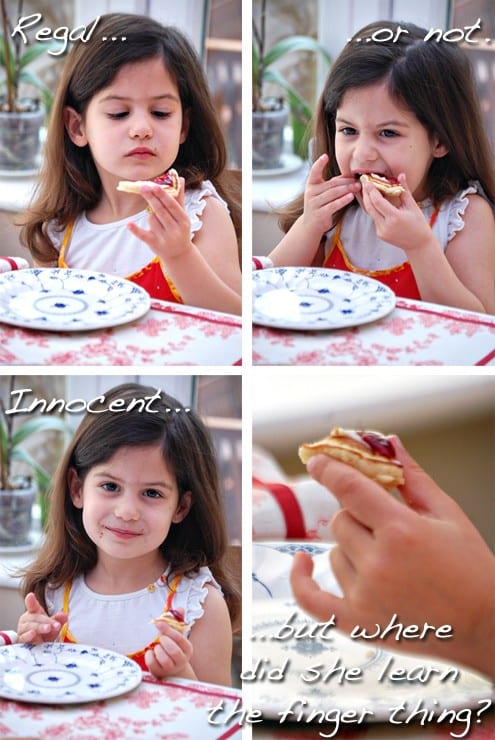 And so there you have it. Not only a quirky little conversation piece, but a royally appropriate treat to serve at your Jubilee party, don’t you think? And, even if you’re not a royalist, these would make a lovely breakfast in bed for Dad on Father’s Day too – just adjust the recipe accordingly (unless he can eat for 16 people)!