Sometimes you just need a clean, bright pasta dish that’s not too heavy. Like this one.
By Sara Clevering 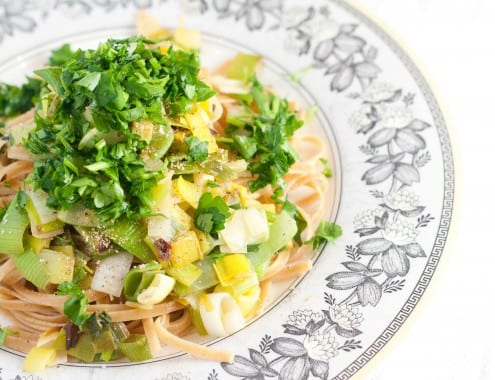 As much as I love  playing with new and unusual ingredients, I also can’t make too big a production about things most days. While I do try to cook my meals “from scratch,” I don’t generally take that to mean anything onerous.  Nope–I need something simple that I can pull together quickly.  Arrive home, get it started, play with my kids and put them to bed, then finish up my dinner and eat.  And then there are often more to-dos to catch up on in the evening.

So a big meal with lots of fanfare isn’t going to happen most nights.  Since I’m just cooking for myself, who do I have to impress?

There can be a lot of exaggeration in food websites when we try to convey the tastes and aromas of a dish through words, or cajole a reader to trust some random amorphous blogger with the task of feeding one’s family.  And with that, while I’m not going so far as to call it full-contact food blogging, you can sometimes get the feeling that every dish you read about is the non plus ultra, the dish that will change your life, the meal you must eat for your life to have meaning.

So even though I’ve been making this dish for ages, I’ve never actually written it up. It was just too everyday, run of the mill perhaps.  You know, just another pasta recipe. And all you do is saute leeks with a few other ingredients and mix with pasta.  And the coup de grace is nothing more than tossing a big ol’ handful of chopped fresh parsley on top.  Yes, parsley.  Not freshly picked  basil or oregano or French tarragon, but boring old parsley–so pedestrian that it was abundant even when no one was telling you that using dried herbs was anathema.

So, maybe this doesn’t qualify under Generally Accepted Blogging Principles as “Blog-Worthy,” but it’s a real lifesaver for me sometimes–if I have too many leeks that are starting to lose their perkiness (seems to happen a lot), if I just need something I can throw together quickly without too much effort (mental or otherwise), or if I just want a clean, bright pasta dish that’s not too heavy.

And it works together well:  I love how the silky leeks and the astringent parsley blend with whole wheat pasta.  You actually will want to use whole wheat pasta because, for whatever reason, it tastes so much better than regular pasta here.  I’ll admit I usually reach for the regular refined stuff, and the fact that I don’t want to is just one more plus about this combination.

Fast, easy, and I even get to feel virtuous.   I guess I did impress myself. 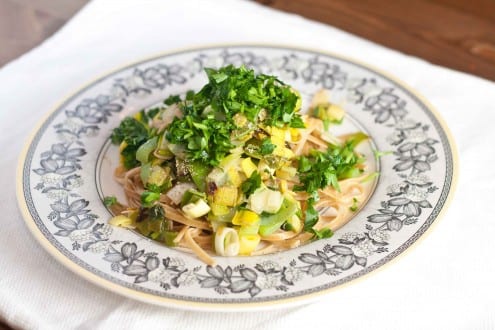 An Easter Brunch to Remember and Revisit – The Publican, Chicago