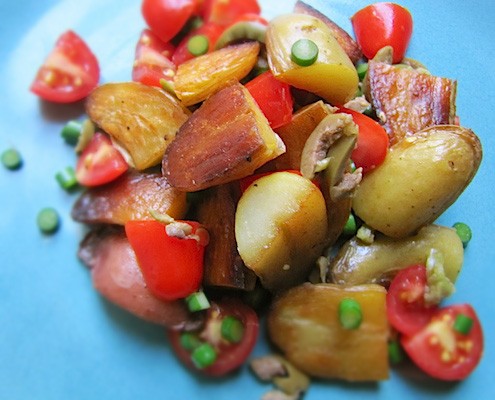 Cathy Erway is a home cook, rooftop gardener, and the…

Honest Cooking wants to be just as trendy as the other kids, so naturally we’re glad Cathy Erway decided to debut with a cool warm salad recipe.
By Cathy Erway

I’ve been hearing the term “warm salad” being tossed around a lot lately, and feel it might be a new menu buzzword. Perhaps it inspires curiosity, still carries an unlikeliness that hasn’t been as indoctrinated into our culture as, say, “chilled soup.” Sometimes it makes perfect sense (roasted beets, dressed in a light vinaigrette), other times, seems more of a stretch (sorry, sauteed vegetables are just that). I’ve used the term for this dish because of its middle-road temperature. The potatoes are piping-hot and crisp, and when tossed with cool vegetables the combined effect is perfectly warm. It’s the best way to enjoy it, I think.

Summer is definitely here and it’s time to pull out a few picnic staples, like potato salad and coleslaw. But then, so are new potatoes — those plump, tight-skinned tubers just dug from the soil. Rather than muddle them up with lots of mayonnaise, a clear coat of extra-virgin olive oil seemed like a lighter twist. I picked out fingerling potatoes for this version, but any new (or old) potatoes would work fine. They’re roasted in oil until crisp on the bottom, and afterward given a coarse chop, so that they could absorb a bit more. 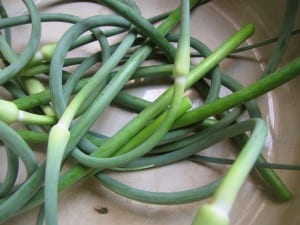 Everyone’s been asking what to do with garlic scapes, and I’m looking for more answers to that question, too. I’ve gotten garlic scapes in my CSA share for the past two weeks, so have some reserves of it to see. One of the least fussy solutions is surely just chopping them up raw to season or garnish just about anything. Milder-tasting than garlic cloves, these are the fresh shoots of the same plant. They’re sturdy and solid through, and have a tendency to curlicue which makes them attractive in a vase (if you’re really out of ideas for how to eat them). But they add a zesty, garlicky bite to this salad, and dots of spring color, too. 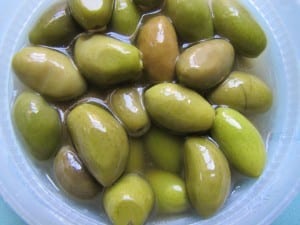 I picked up some fancy Lucques olives at the Brooklyn Larder recently, because I was sick of picking my favorites out from mixed olive tubs. These are firm, meaty green olives from France, with a lovely nutty flavor that’s not too intense. Use any olives that strike you, and smash out the pit with the side of a chef’s knife to finely chop.

Olives and grape tomatoes just go together like a Mediterranean summer to me. 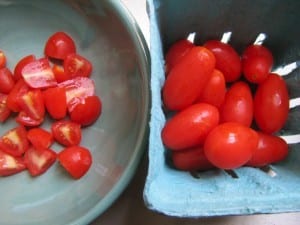 Chopped and mixed together, these don’t need any salt, especially if your grape tomatoes are vine-ripened and extra-sweet. I found mine at the Greenmarket, grown in a hothouse though, since the tomatoes outside have some time to ripen yet.

Garlic Scapes, Worth the Wait

This salad really grew on me with every bite. It’s so bright, juicy and flavorful it inspired standing-at-the-kitchen-sink-eating-up. Hope it does for you as well.

Preheat oven to 400 degrees. Coat potatoes in the olive oil and season with salt and pepper. Place cut side-down in a sheet pan in a single layer. Roast for about 5 minutes or until golden brown on the bottom; flip, and let cook another 2-3 minutes or until soft inside.

Let cool a few minutes. Once potatoes are just cool enough to handle, give them a coarse chop. Toss with the remaining ingredients and serve immediately.

Cathy Erway is a home cook, rooftop gardener, and the author of The Art of Eating In: How I Learned to Stop Spending and Love the Stove. She hosts the podcast Let's Eat In on Heritage Radio Network and is a contributor to The Huffington Post, Saveur, and local publications in Brooklyn.