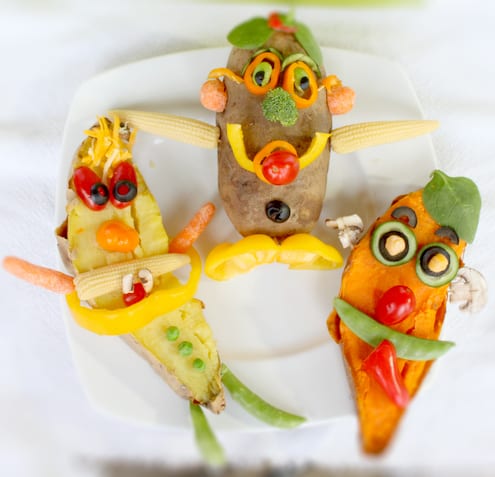 A great way for kids to have fun with, and be interested in learning about veggies.
By Kelsey Hilts

I had the opportunity to do a cooking project in my son’s preschool class for “Nutrition Week” at the beginning of December. We read Annabel Karmel’s I Can Eat a Rainbow, made rainbow smoothies using fruits and veggies of every color of the rainbow, and created Mr. {Baked} Potato Heads. After having brainstormed this edible art project for a while (inspired by our beloved Mr. Potato Head) I was excited to finally see the food art come to life. It was fun to watch the preschoolers play with healthy food, learn about some new vegetables, and ultimately see what they created.

I presented a smorgasbord of veggies, cut in different ways, down the center of each table and every child was given half of a baked potato. (Yams and sweet potatoes are also colorful and nutritious options.) After presenting a Mr. Potato Head toy sporting his muscle arms {he got his muscle arms by eating veggies and other healthy foods, of course!) the kids went to town with their creations. Some of the preschoolers simply started eating their favorite veggies; some spent time asking about the veggies they didn’t recognize; and some went right into sticking veggies into the potatoes. (And I have to admit that I had fun making a few samples.)

You can do this project with one child or with a large group and it can be as simple or elaborate as you want it to be. It was a great hands-on cooking project for the 3 and 4-year olds and a fun way to play with healthy foods. It would also suit older kids and I suppose the creations would just get more elaborate as the kids got older. The kids love to be part of the brainstorming process, too, thinking about which veggies would work and the older kids can help custom cut their veggies into specific shapes.

If you want additional condiments for eating the baked potatoes and veggies, you can serve ranch dressing, sour cream, salsa, chili, butter, etc.

*Toothpicks can help hold the veggies in place, especially if you are using a whole potato. For the preschoolers, we opted not to use toothpicks to avoid any poking danger. When working with half of a potato, the kids were able to easily stick the veggies directly into the white flesh of the baked potato or simply arrange the veggies on top.