PARTNER POST — TrySwedish Thursdays is a culinary collaboration between TrySwedish, West Sweden, Gothenburg and Sweden’s most famous and loved cheese Västerbottensost®. Discover the edible delights of the land.

Created by accident in the 19th century, Västerbottensost represents a unique taste of the land, unlike anywhere else. It is an iconic Swedish symbol, a delicious tradition that is impossible to match.
By Annelise McAuliffe

One ordinary day in Burträsk, Sweden, Ulrika Eleonora, a dairy maid, became distracted by a farm hand she was courting. Before she knew what was happening, the cheese she was making was ruined, but Västerbottensost was created.

In 1872 Ulrika Eleonora created the famed Swedish cheese, Västerbottensost, on accident and the mystery still remains surrounding what makes it so unique. Is it the land the cows graze on, the planks the cheeses rest on or can we leave it up to mystical terroir?

Made and enjoyed since the 19th century, the Swedish cow’s milk cheese became a defined standard of production in 1910 along with a characteristic “W” trademark stamped on each wheel. However, the exact specifications of creating the unusual cheese are still kept in a secret vault, only passed down from one Master Cheesemaker to the next. In 1935, the cheese received it’s official name, paying homage to the Västerbottensost region it comes from. 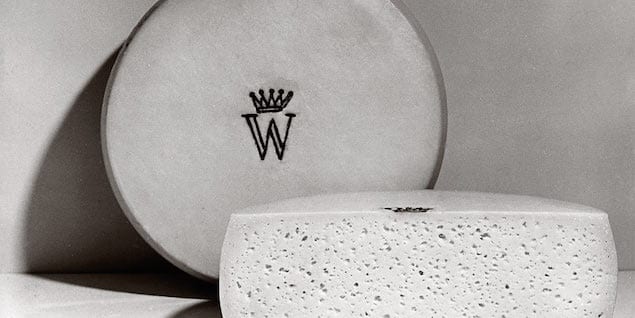 How is it made?

Today, the cheese is still produced in the same way Ulrika mistakenly created it over one hundred years ago, by the Norrmejerier dairy company. The cheesemakers continue to only use fresh milk brought in daily from local cows. The milk is pasteurized and curdled to separate the whey and curds that are then formed into the large wheels of cheese. Once pressed into its final round shape, the cheese is brined to seal in texture, moisture, and add just the right amount of salt flavor.

At this point, Västerbottensost is allowed to rest and mature while sitting atop spruce shelves. For at least fourteen months, the cheese develops rich flavor while it is periodically turned so that it ages evenly. With such care and hands-on precision, it is no wonder the legendary Swedish cheese results in such interesting flavor and texture characteristics.

Once the cheese has rested, Master Cheesemaker Thomas Rudin takes a small piece of the wheel and examines the flavor, aroma, appearance, and mouthfeel for readiness. If approved, the cheese is ready for delicious consumption!

What makes it unique?

People have tried to master Västerbottensost, but it has not been possible anywhere other than in Burträsk. Some say it is the lime-rich soil that the nearby dairy cattle graze on that alters the taste of the milk and gives the cheese its special characteristics. Others argue it is the minimum of 14-month resting period on native spruce wood that provides the cheese with its exclusive personality. Still more reference the midnight sun that occurs during a Swedish summer, but perhaps it is a combination of all three and more that gives the cheese its distinct taste of local Swedish terrior.

Today, it is used by chefs and home cooks around the world as a stunning addition to a cheese plate or an irreplaceable ingredient in a sweet or savory recipe.

Hailed with the high honor of being a cheese of the Swedish court, it is no secret that Västerbottensost is special. Its secret and unusual history has provided a fun story to add a new element alongside its special flavor. When asked what is compares to or tastes like, Swede’s have proclaimed, “There is nothing like it!” not only out of pride, but because there truly is nothing comparable to the hard cheese.

Västerbottensost wheels have a slightly crystallized, creamy texture with nutty flavors hinting at truffles. It effortlessly balances bitter and sweet, an enviable cheese trait, that coincides beautifully with its pungent aroma. Today, Västerbottensost is offered to cheese lovers around the world by the whole piece or grated.

The next time you are in the Burträsk area, be sure to stop by for a tour of Västerbottensost production and for a taste right where it is made.