Hugh Amano recalls some of his indulgent culinary adventures in Japan.
By Hugh Amano 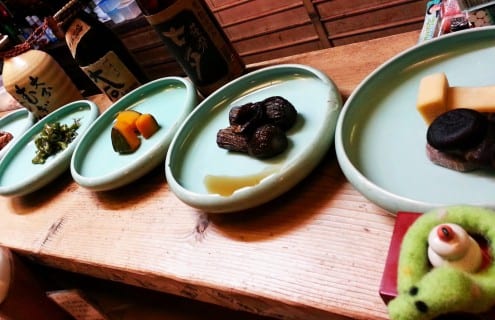 One doesn’t think of Japan as a place you’d bring an extra 10 pounds back from. Wouldn’t the modesty and humility in the culture be reflected in the cuisine? Of course it is–only not for me when visiting my family; they aim to keep the American boy plump and well-fed, and ne’er was the night I climbed out of the bath and into the futon without being amazingly full of food and drink.

My time at Fat Rice reemphasized what is too often a background note here in the States: the importance of texture as a player in the complex scheme of something being delicious. To re-quote a friend and believer: “There are two types of people in this world. Those who put chips in their peanut butter and jelly sandwiches, and those who hate life.” I remember standing with Old Crazy Hair in the kitchen at Fat Rice as he sliced some tiny jellyfish, moving with his usual frenetic energy to toss them with loads of flavor via chilies and black vinegar and sesame and whatever else. He held a piece out for me to taste, and yeah, the flavoring was delicious, but what I remember the most is the texture–the snap and so-satisfying crunch these little guys had, with nothing backing up the fear of a coelenterate planet we in the States were raised with.

My time at Fat Rice also exhausted me (boo-hoo, I know, because the whole crew there and in so many other restaurants is still, and will still be doing it day in day out while some of us gallivant off to foreign lands to behave badly in karaoke bars at 3am) to the point that my palate became an absolutely plowed field, and the week between putting that last Arroz Gordo in the window and my departure to Kyoto allowed said field to rest and relax and prepare to attack some new tastes and flavors and textures. So off I went.

Upon arrival, I was whisked to Gaku, the favorite local izakaya, right on the outskirts of the Suntory distillery in Yamazaki. No whiskey tonight; it was beer, then hot sake, then a steady parade of simple but delicious standards: agedashi tofu (fried silken tofu in a light broth), cured cod roe (snappy and creamy), gyu suji (beef tendon braised until soft and incredibly succulent), tamagoyaki (familiar layers of egg rolled together), tori karaage (essentially fried chicken, super garlicky and crisp), not to mention several various cuts of sashimi, stunningly fresh, more so given my usual (non) proximity to the sea. My brother is famous for (not) discerning types of fish by shrugging and saying “it’s a fish!” Though I can see where he is coming from, within the criticism lies the answer; the character of raw fish is extremely subtle, and if one’s affinity is toward the heavier, saltier snacks, there isn’t going to be much there to pick up. But, if you turn your other senses way down, you’ll find that on the lower frequencies, the personality of the fish will speak loudly. Your palate will gain your other sensual faculties and you’ll taste/smell/see/hear/feel the freshness, the smooth melting fat of otoro, the cool salinity of tai, the crunchy snap of the extremely-small whole baby squid.

The last tokkuri squeezed of every drop of sake, my brother in law gave us a much coveted ride home (the thought of adding one more train ride to my two flights and blue line scorecard was too much to handle), we all had a groggy nightcap, and I floated off to bed. If you find yourself headed to Japan, I have a few pieces of advice: arrive in the evening, or as near to it as possible, stay up late, and don’t sleep in forever. You’ll be on track and away from jet lag in no time (unlike the trip back this way, which is always so much harder to overcome). Smile at people and say–in whatever busted up poor man’s version of Japanese you can muster–things like “arigato,” and “sumimasen,” and “konnichi-wa”. You know, put some effort forth. And most importantly, eat every single thing that is put in front of you. There’s a reason people eat what they do; a different definition of delicious for every palate, every culture. Look past the usual bacony suspects of fat and salt and into what makes that particular food great. The worst thing that could happen is it bites you back.

How to Make BBQ Sauce