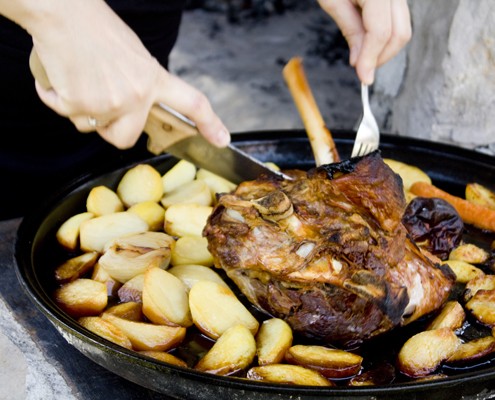 Roasting under the bell is a traditional Balkan way of preparing food. The bell is originally called peka. This way of preparing food goes way back into the past traditions of Balkan people. It is connected to the notion of a fireplace as the heart of every traditional household, where families get together, where meals are prepared, where everything happens. The most common food prepared under the bell is lamb (or some other meat), octopus in sea areas, all types of vegetables, especially potatoes, and bread. Food prepared this way has a really special flavor and cannot be compared to anything else. Concentrating flavors and aromas under its top, the peka produces exquisitely savoury dishes. It is partially roasted, partially cooked. Home made bread under the bell, as well as lamb and octopus are definitely Croatian specialties and you can try them in better restaurants. Many households own bells for baking and prepare their food this way, but usually only on holidays or important occasions. 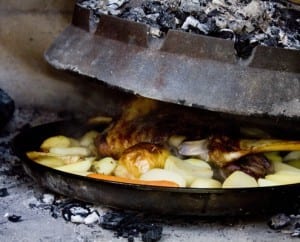 Meat or fish is put in a large, shallow round baking pan. A little bit of oil is added, along with spices, then the meat is covered with large domed clay or metal bell. Then you ligth a fire on the board of the stone barbecue. When there is enough hot coal, you put the entire bell (with food inside) on it and cover the lid with some more hot coals, so that it is baked from under and above. This way, the meat slowly cooks in its own juices. After 45 minutes, vegetables are added, so they don’t get overcooked (meat takes more time to cook), but you can cook it all together (my family does it this way). You need to keep some spare hot coals on the side of the fire place so that you can add more of it while it’s baking. The average time of baking is 1,5 to 2 hours. 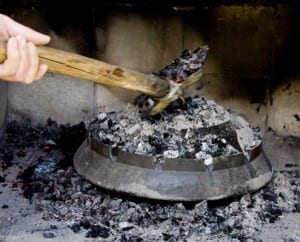 Here I am showing you a true gourmet meal: roasted lamb with potatoes and vegetables. It is usually made during Easter time and is among the most popular meat dishes to tray in Croatia. Fresh young meat and Mediterranean herbs give this dish ancient flavour of distinguished beauty.

5.0 from 2 reviews
Tradition:Roasted lamb under the bell