These Tiramisu cups are a quick idea for a delicious dessert in a glass. The creation of Tiramisu is disputed between Tuscany, Piedmont and Veneto. Regardless of its origin, we love to eat it.
By Veronica Lavenia 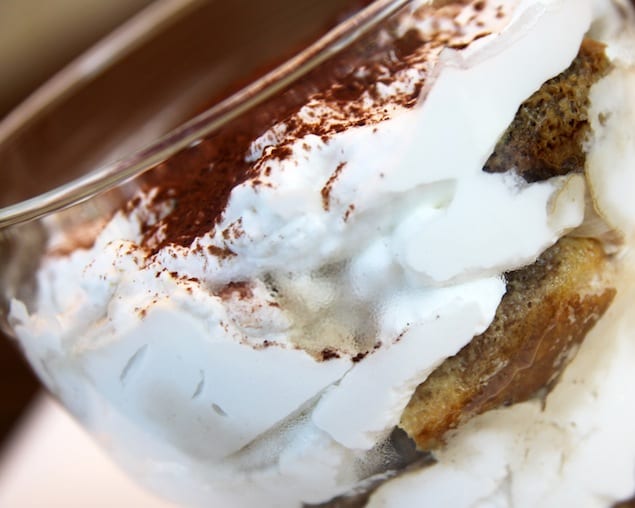 The creation of Tiramisu is disputed between Tuscany, Piedmont and Veneto. According to a Tuscan legend, Tiramisu was born in the seventeenth century in Siena by some confectioners who wanted to celebrate the arrival and the grandeur of the Grand Duke of Tuscany Cosimo de’ Medici. The tiramisu was called “Zuppa del Duca” (“Dukes’s soup) in honor of Cosimo de Medici. Also according to this legend, the Tiramisu became the favorite dessert from the nobles for his skills exciting and aphrodisiac, which is why this name that, in a metaphorical sense, can be translated with the phrase “Make me feel good”.

Another legend holds that the cake was invented by a pastry chef from Turin, in Piedmont, to honor Count Camillo Benso di Cavour, active in the unification of Italy.

Both stories are, in turn, denied by another belief, that the Tiramisu comes from the tradition of the city of Treviso, in Veneto. In this region of Northern Italy, at one time, people gave an energetic sweet to children and elderly, called in the local dialect “El sbatudin”, prepared with beaten egg and sugar. An imaginative chef-confectioner, Loli Linguanotto added, as a result, mascarpone, savoiardi cookies (ladyfingers), cocoa and bitter coffee. Beyond the myths and powers, the Tiramisu is, without doubt, one of the most famous Italian desserts in the world.

A sweet so rich should be eaten in the colder months but in the summer it is possible to create a lighter but just as tasty dessert, mascarpone free.

These Tiramisu cups are a quick idea for a delicious dessert in a glass.

Print
The creation of Tiramisu is disputed between Tuscany, Piedmont and Veneto. Regardless of its origin, we love to eat it.
Author: Veronica Lavenia
Recipe Type: Dessert
Cuisine: Italian
Serves: 2
Ingredients
Instructions
3.2.1275
See Also
Featured