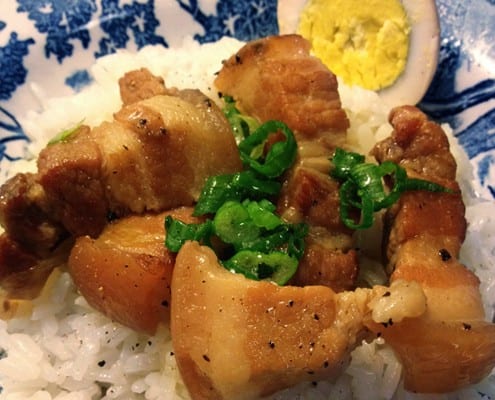 Thit kho trung – braised pork belly with hard-boiled eggs is a dish you usually won’t find on Vietnamese restaurant menus, but it is served in almost every Vietnamese home.
By Jessica Dang

If you were to ask someone to name a traditional Vietnamese dish, they would probably be hard-pressed to think of anything beyond pho, the omnipresent beef noodle soup, or the popular banh mi, a baguette sandwich borne from the days of French colonialism. After all, there are plenty of eateries devoted to either one of those classic creations. But, somewhere, in a big pot simmering away in the kitchen of a Vietnamese home, there is thit kho trung, or, braised pork belly with hard-boiled eggs. Just the mention of this dish to a fellow Vietnamese friend will make them think of their mother.

Thit kho trung is considered to be somewhat of an ordinary dish, meant to be eaten during a typical weeknight dinner with pickled mustard greens, fresh herbs, and a simple soup, or canh, of shredded cabbage and shrimp meatballs. (Although, as humble as it is, it’s also a popular dish eaten during the celebration of the Lunar New Year.) Usually, it’s made in a rather large quantity so that it lasts several days. The best part? It tastes even better the next day. Restaurants don’t see a point in serving it when it’s cooked every week at home. Since this is truly a homestyle dish, everyone has their own recipe. I’ve heard that some people have used Coca-Cola as their secret weapon for a dark caramelized color. There are also other tweaks like adding chunks of daikon radish, which become soft and soak up lots of flavor, or frying the exterior of the hard-boiled eggs for a different type of texture.

The Restaurants for Vietnamese Food in LA

It’s one of those dishes that I’ve easily taken for granted because it’s been around for as long as I can remember. When my sister and I were toddlers, we were spoon-fed little bits of the braised pork and egg smashed into rice. After being away from home for over a decade, I find myself yearning for its presence on the dinner table. The trouble is that it’s not something you can order from a restaurant–you have to make it yourself. I had held it so sacred as something only my mother made that I’ve actually gone a couple of years without having it at all. This past week, I attempted to recreate thit kho trung for the first time in my life. Instead of asking for her recipe, I based it off my memory of her making it and was surprised at how intuitive it was. Did I pick it up through osmosis from watching her cook all those years?  The faint sweetness of the caramel-colored braising liquid and its peppery notes, the melty and unctuous cubes of pork, so tender that it breaks with the touch of a fork; the nuance of the braised boiled egg, broken and mixed into freshly steamed rice… I miss my mom.

Print
Prep Time
20 mins
Cook Time
2 hours
Total Time
2 hours 20 mins
This homestyle dish is commonly found on the Vietnamese dinner table. It's a great weeknight staple that tastes even better the next day!
Author: Jessica Dang
Recipe Type: Main
Serves: 4
Ingredients
Instructions
Notes
For a braising liquid with spicy heat, feel free to add a few slices of jalapeño or a finely chopped Thai chili pepper. If you like, you can serve a small, shallow bowl filled with the braising liquid with fresh sprigs of watercress or herbs on the side for dipping.
2.1.7

The Restaurants for Vietnamese Food in LA