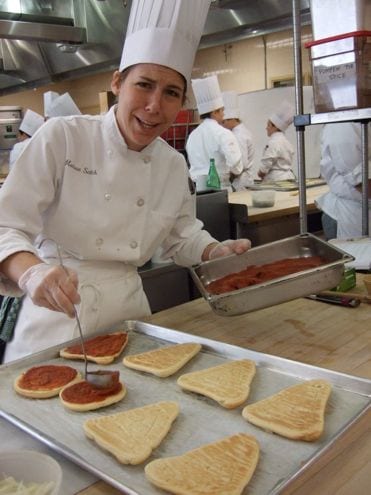 Yesterday, I found myself dining next to a man who carefully blotted the grease off the top of his pizza.   Only having met this person two-hours earlier, I bit my tongue and twitched as annoyance whelmed within me.  Aware that my internal reaction of guttural anger was disproportionate to the crime at hand, I still couldn’t help but feel that a helpless slice of pizza had just been molested before the eyes of the entire dining room.

With a paper-napkin, folded crisply in quarters, my dining neighbor smothered the slice with the serviette, calmly, yet firmly pressing down the cloth, as something akin to the final scene of “One Flew Over the Cuckoo’s Nest” unfolded before me.   When the napkin was finally removed, the once glossy, joyous pizza stared back with a lifeless, dull surface of cheese.   As the crowning affront, he lifted the grease stained napkin to display his disgust, thereby condemning all of us who had consumed our food unmolested to being tubby, lard-loving, non-sophisticates.

In a form of mild retaliation, with no conversational segue, I announced that my favorite food was butter. After a moment of confused silence, no one at the table could think of anything to contribute to this spasmodic proclamation.  So, I continued.

“My second favorite food is cheese,” I added in an unnecessarily defensive tone, losing any respect of social normalcy I’d mustered to gain throughout the evening.

“Really?” said the Pizza Blotter, in disbelief.  (In retrospect, I appreciate his attempt to transform my outburst into a bona fide conversation.)   Despite the attempt, the dialogue had nowhere else to go and silence resumed.

Afterward, I reflected on my reaction to the evening’s events, and as absurd as it may seem to some, I still believe that the pizza was wronged.

In cooking, we use the phrase, “monte au beurre,” a French technique that involves tossing small chunks of butter into a sauce just before it is served.  This adds flavor and a shinier appearance.    The sauce without butter lacks depth and elegance.   Fats are a gastronomic luxury that should be enjoyed and savored, not labeled as a criminal and eradicated from our plates.   If you eat a pizza, enjoy the pizza for what it is….bread and delicious, fatty, cheese.  If you eat a salad, enjoy a salad for what it is…fresh, crisp, flavorful greens.  Don’t bastardize your food for the simple desire to consume them with less guilt.

Were we to slow down, take the time to taste the foods, rather than devour them blindly and without much care, we might change our eating habits.  People might eat with fewer anxieties if they stopped trying to force their favorite indulgences into a category of every-day consumption.  To eat a first-rate salad, rather than a second-rate pizza might be the tastier route. So, I urge the dieters not to blot their pizza nor sacrifice the butter on their toast. I urge them to eat mindfully, with care, and with enjoyment.

Perhaps, all we need to do is slow down and to think before we chew.