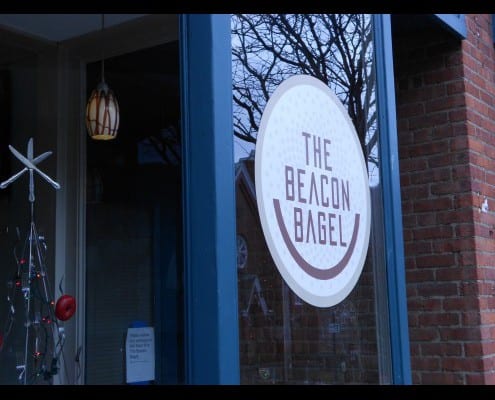 In the small town of Beacon, about two hours north of New York City, there is The Beacon Bagel, and it is a reminder of how honest cooking can be.
By Marissa Sertich 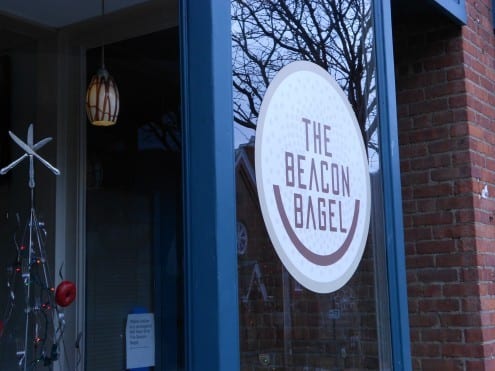 Ego, adrenaline and odd hours are the gritty underside of fine dining.  While civilized citizens sip wine and anticipate the arrival of their French-y entrées, the back-of-the-house guzzles black coffee and anticipates the death of the next waiter to deliver an order to the wrong table.

Loyalty is as rare as the meat. People are looking for better pay, finer food to fry, or simply learn when they can, then go.  The servers find jobs in the box offices of community theaters, or end up at medical school, while the line cooks find better gigs for better pay.  We are all pirates and we know it.

I have to remind myself that it’s just cake – that all I had wanted to do was make a simple, joyful product for appreciating audiences. But, when I’m working with pirates the soul struggles to remain afloat.

That’s why I stop for bagels. In my small town of Beacon, about two hours north of New York City, there is The Beacon Bagel, and it is a reminder of how honest cooking can be.

Local celebrities of sorts, the owners Art and Anik Burns have been boiling bagels for the past two and a half years. They’ve built their business based on the philosophy of quality ingredients, knowing what they love to eat and using that as a standard for feeding others. They feed their neighbors and their neighbor’s children with pride and joy.

When I met with Art and Anik, they stressed the importance of an open kitchen.  “We have nothing to hide,” said Anik.  Not only can kids and grown-ups alike marvel at the bagel making process, but more importantly, they are keeping it honest.  Doing so, they have become the bagel shop of the community.

A former advertiser, Art Burns turned to his Uncle’s bagel recipes when the recession hit.  They opened the shop with few expectations and a family background of bagels. With those family techniques, Art and Anik continue to build upon their recipes and now offer specialty sandwiches such as the “25 Mile,” a cheddar, bacon, avocado and tomato bagel dedicated to a customer who drives twenty-five miles each day for his breakfast.

Art and Anik can be found at The Beacon Bagel seven days a week.  Despite their long hours and the stress of being small business owners, they are the two most jovial people I’ve ever had the pleasure to meet. Both agree that the interaction with customers is the most gratifying aspect of the job.  Knowing the names of people who step through their doorway and watching how people enjoy their product indicates that they are doing the right thing.

Beyond the world of foams, linen napkins and disgruntled waiters, there still remains an honest way of cooking.  Great food is tucked away in small towns.  With Jimmy Stewart idealism, people like Art and Anik transform Beacon into nothing short of the idealistic town of Bedford Falls. People recognize one another, say hello, and hope that everyone is doing their best.