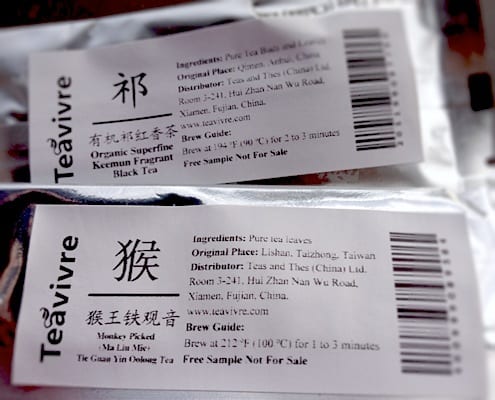 A person’s fervent love of coffee often spills into other drinks, and given the history, it’s very natural that most coffee fans would also sip the occasional cup of tea. Personally I love all sorts of tea, with my adoration clinging strongest to the traditional camellia sinensis varieties (i.e. non-herbal). And because traditional tea has so many manifestations, cultivation styles and variations, there’s always the prospect of trying out a different kind of tea.

The two latest additions to my list of teas tried came from Chinese tea purveyor Teavivre who sent out several samples of a Keemun Black Tea and a Taiwan Monkey Picked Oolong. I steeped each according to the recommended directions through numerous infusions and enjoyed each.

Keemun Fragrant Black Tea is a common tea, though most folks don’t know they consume it. Most often, it is found as a component of blended black teas like Earl Greys but it can certainly stand well on its own. My infusions of this Keemun produced a dark amber hew ripe with notes of cola, agave, pine, raisin and mineral water. The tea was deep at times and overall deliciously satisfying.

If you’re in the market for a deep fruity black tea or a subtle-yet-sweet oolong, give either of these Teavivre teas a sip.