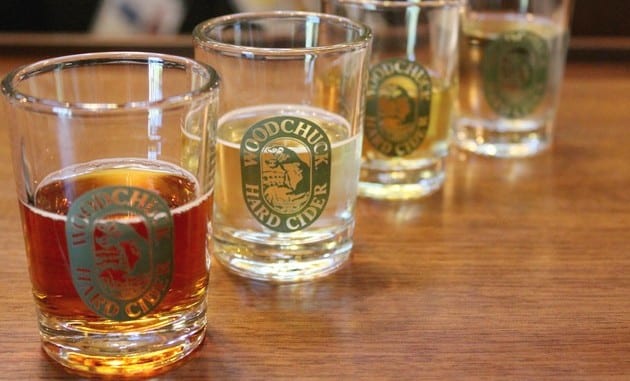 The sweet-tart crunch of an apple straight off the tree is hard to beat. It’s also one of those rare fruits that tastes just as good—and sometimes even better—baked, fried, and pressed into cider. 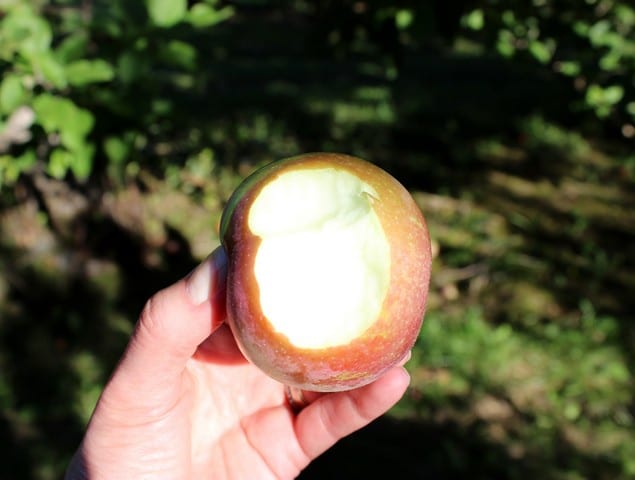 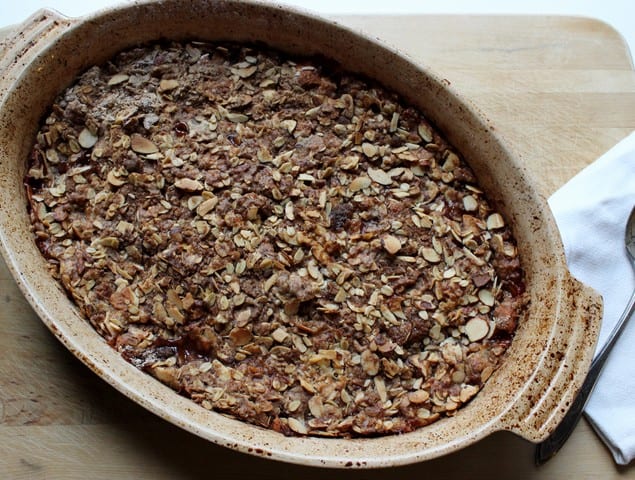 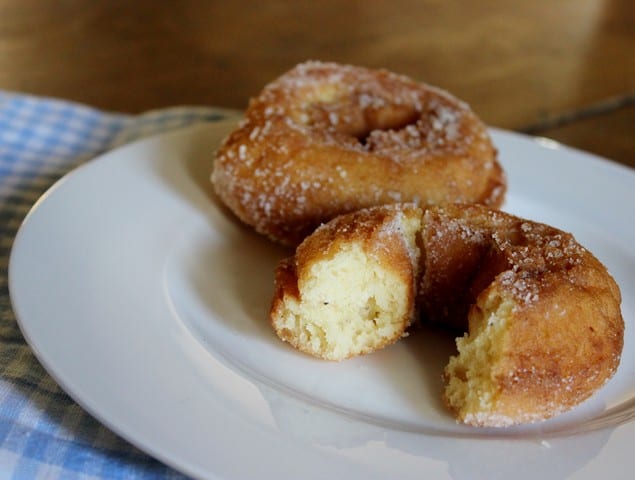 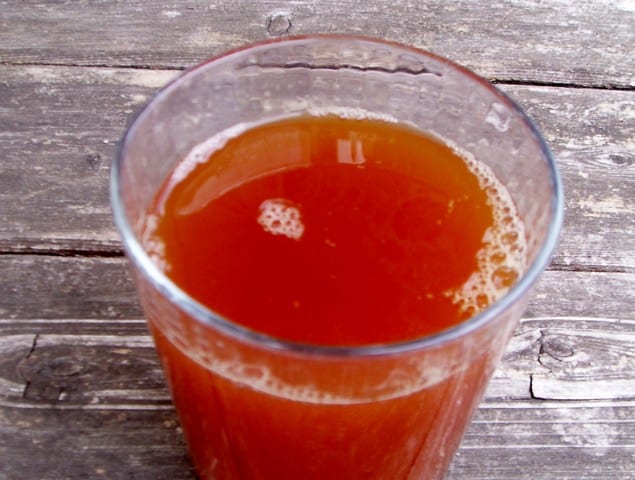 Cider’s cousin, hard cider, is all the rage in Vermont right now, although it’s really a resurgence of a once thriving colonial industry. I have to confess I’m a little late to the party. Doubtful that I would like it, I only tried my first hard cider this past summer. I was intrigued, and it inspired me to embark on a Vermont Hard Cider Tasting Project, similar to the Beer Tasting Project I undertook back in 2012. Chris enthusiastically agreed to join in.

We started out at Citizen Cider in Burlington, venturing into their industrial-meets-cozy tasting room on a drizzly afternoon. The garage door windows open onto an elevated deck overlooking  artsy Pine Street, infusing the space with a comfortable, cool vibe—a “Cider for the People, Made by the People” vibe, as their logo states. We settled in at one of the communal wooden tables and ordered. Chris had done some advance research and zeroed in on a glass of The Full Nelson. I decided to go in without preconceptions and ordered the $6.00 tasting flight of five ciders on tap. 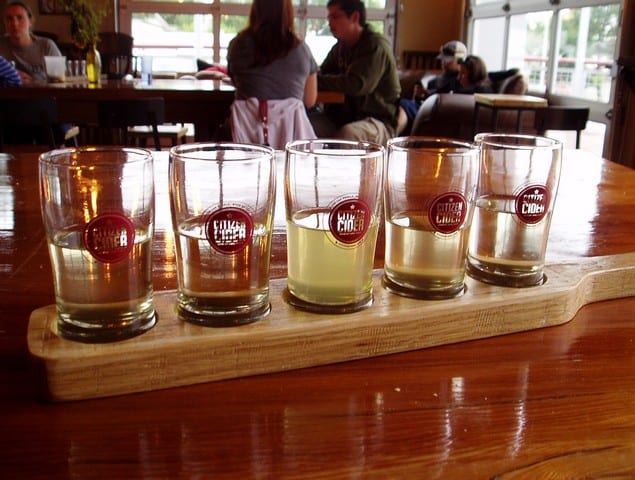 Beginning with Unified Press, their popular flagship cider, I quickly determined it’s too sweet for me, even though it’s categorized as off-dry. It might be just right for many other palates, but it’s the kind of cider that made me previously think I wasn’t a cider person. Not giving up yet, I moved on to the Wit’s Up. Made with a Belgian beer yeast, it’s pleasantly dry, perhaps Citizen’s driest. It tastes more like a beer than a cider to me, but not as heavy. On a warm day, it would be especially quaffable. This was promising.

The Stan Up was next, a lively, bright cider, on the tart side. It’s made from an heirloom apple blend by Stan, the owner of Happy Valley Orchard in Middlebury. We’ve been picking apples there for years, since our girls were little, so that connection endeared it to me. I also sampled the B-Cider, a blend of cider and honey from Happy Valley’s own bees, described on Citizen’s menu as “a taste of the full circle of life on the orchard.” That’s a beautiful thing. B-Cider has a wonderfully floral perfume, and although sweet at first, it has a dry finish, almost like a wine, and a slight fizz. I was coming around. 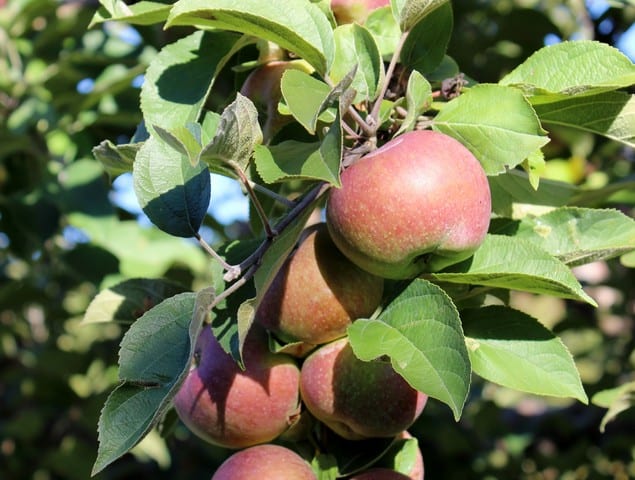 My favorite one, though, is The Full Nelson, a rare new taste sensation for me. I have to admit I was skeptical when the menu described it as a cross between an IPA, a champagne, and a hard cider, but I’ll be damned if that isn’t accurate. Aged and finished with Nelson Sauvin hops, it’s yeasty and complex and left me wanting more from Chris’s glass. It’s the cider that won me over. We’ve made it back to Citizen twice since then, bringing some friends along, enjoying more of The Full Nelson and some tasty pub fare, and once catching an excellent band in town from Philadelphia. Overall, it’s a welcome addition to the food and drink scene in Burlington, and I’m glad we can pick up a bottle of The Full Nelson right in Bristol when we want to enjoy it at home.

The next stop on our Tasting Project tour was Woodchuck Hard Cider in Middlebury, one of the largest cider makers in the US. This wildly successful company just opened up an impressive new facility that can fill 600 bottles a minute, or 3 million a year, according to the friendly server in their elegant tasting room. 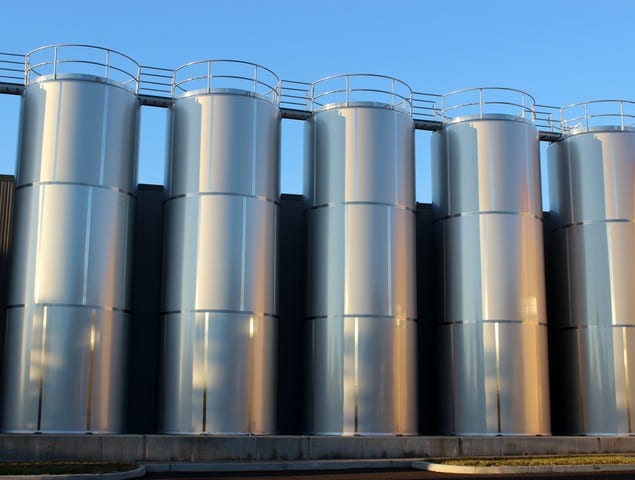 They give you four samples on the house and after that you need to pay for them, a more than fair deal. 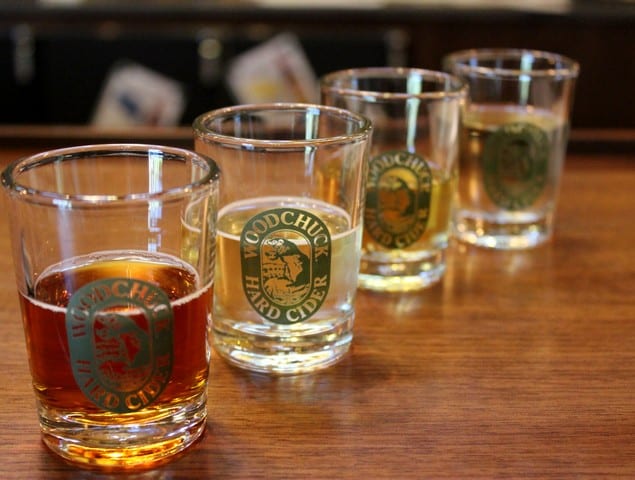 I started off with the Local Nectar, made with 100% Vermont apples. Unlike Citizen who sources all their fruit from within 150 miles, Woodchuck, given the volume they produce, has to look elsewhere for many of their apples. This homegrown cider, though, has a subtle mustiness and goes down easy. Next up was the Ciderbration, a very apple-y cider but perhaps a bit too much like juice. The Hopsation, a “hop forward cider,” is their original small batch cider infused with Cascade hops, a winning combination in general, I’ve discovered.  Very clear and light, it’s their driest, but not quite dry enough for me. I prefer a more hoppy contrast to the apple’s sweetness, although I think my palate is drier than most. But for those who like a mildly sweet beverage that’s lighter than a craft beer (and gluten free; ciders are riding that wave) and much better for you than a soda or sugar-sweetened juice cocktail, this cider would be worth checking out (we tried some at home too). The server added a fifth cider for us to sample, the Amber, saying it was the original and everyone should try it. Crisp and balanced, it has a classic cider taste. My favorite of the batch, though, was the Smoked Apple. Infused with deliciously smoky applewood, it has just the right amount of smoke. For those who like flavored ciders, Woodchuck has a wide array, from Chocolate Raspberry to Pumpkin, to Coconut Pineapple. That’s not really my thing, aside from the Smoked Apple, which I will seek out again. Besides, I like Woodchuck’s motto: “Give a ‘chuck.” 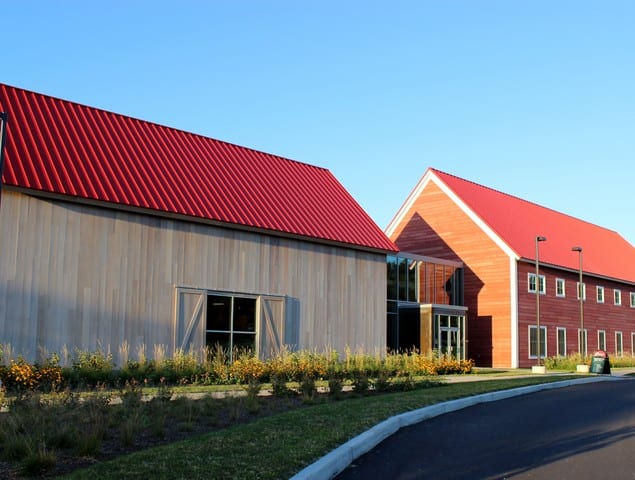 The next two tastings Chris and I conducted at home with ciders produced by smaller cider makers. Shacksbury Cider’s The Basque, is actually produced in Spain and then bottled in Shoreham. The owners also import cider from England, but have recently released in limited amounts a cider made from local “lost apples”—apples they’ve foraged from trees homesteaders planted specifically for homemade hard cider over a century ago. The Basque is unfiltered and fermented with wild yeast, rendering it cloudy and golden, similar to an unfiltered pale ale, but without the carbonation. Its label describes it as extra dry, which is accurate; I’d say it’s a bit too dry even for my palate. It has a bold, citrusy tang with a musty finish, and is a whole different animal from the previous ciders we tried. A t$14.99 a bottle, it’s the most expensive cider for sale at the Middlebury Natural Foods Co-op. Shacksbury is getting a lot of media attention, so some people must love it, but for us it’s a yet to be acquired taste. We’re interested though in giving their local lost apple vintage, called 1840, a try.

Finally, we picked up a bottle of Flag Hill Farm’s Vermont Cyder, “with a y,” that is. Perusing the shelf of local, artisanal ciders at the Co-op, I was swayed to buy this one by the sign underneath it citing a New York Times description: “cider with the soul of wine.” The packaging does resemble wine more than anything else, from the shape of the bottle to the cork that seals it (the same goes for The Basque). And the cider itself is indeed more similar to wine than to the sweeter ciders at Citizen and Woodchuck (except for The Full Nelson which really does, amazingly, resemble champagne). It’s definitely dry, but not as dry as The Basque, and I tasted sour apple and earth. As for the bouquet, the best way I can describe it is that it smells like fall. Made with wild, organic apples and no additives or artificial ingredients, Flag Hill Cyder is fermented with wild yeast and aged at least one winter. At 8.5% alcohol, it’s the most potent of the ones we sampled (the others hover around 6.9% or lower); again, like wine, a cider meant for sipping.  It sells for $9.99 at the Middlebury Co-op but, alas, is available only in Vermont, in limited release. I usually lean toward red wine and Chris toward craft IPAs, but I can see the appeal of mixing it up and sharing a bottle of this cyder along with a hearty braise on a chilly fall evening.

So I guess I could say I’m a cider convert. Vermont was dubbed the “Napa Valley of hard cider” in a recent article, although I think Sonoma is more apt, and more preferable to most locals. Either way, I’m glad that hard cider is back, and is here to stay.