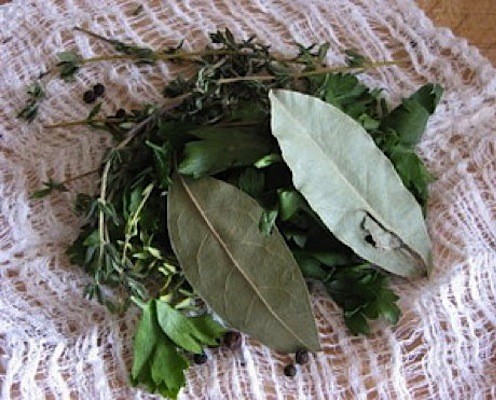 In my mind, one of the main differences between a good cook and a great cook (and we’re talking home cooks here) is in the use of basic raw materials. That is, if you start off with a great steak and don’t screw it up, it will be a great steak…start off with a lousy steak, and no matter what you do to it, it’s still going to be lousy.

Another little item which separates the good cooks from the really good cooks is homemade stock…be it veal, beef, chicken, pork, seafood or vegetable (or some combo thereof), a homemade stock is going to be world’s better than that stuff in a can or especially that stuff that comes in those little cubes (though as a flavor booster in certain situations, they do come in handy); they’re about 80% sodium and the rest is unpronounceable weirdness, so proceed with caution.

Right now, I’m not one of those cook/hoarders who saves up scraps in the freezer to hopefully some day have enough to make a nice stock. Nah – when I feel like making stock or I’m running low on frozen stock, or I know I’m making a dish that requires, say, veal stock, I go and buy the chicken, veal, beef, bones, whatever and make the stock then and there. Then I freeze it, in everything from 1 oz. portions (ice cube trays are great for that) up to quarts – frozen first and then vacuum sealed, or at least frozen in high quality plastic containers.

There are, to be sure, plenty of arguments about the difference, if any, between stock and broth. Marcella Hazan, in her Classic Italian Cookbook, writes about broth (brodo) thusly:

The broth used by Italian cooks…is a liquid to which meat, bones and vegetables have given their flavor, but it is not a strong, dense reduction of those flavors. It is not stock, as the term is used in French cooking. It is light bodies and soft spoken…

Julia Child, in her seminal Mastering the Art of French Cooking, says:

The wonderful flavor of good French food is the result, more often than not, of the stock used for its cooking, its flavoring, or its sauce. A stock is the liquid obtained from the simmering together of meat, bones-or fish trimmings-with vegetables, seasonings and water. This liquid, strained, and boiled down to concentrate its flavor if necessary, is the basis for stews, braised meats or vegetables, and the liquid used in making all the sauces that have a meat or fish flavoring.

So, maybe we can say that stock is French and broth is Italian? Works for me.

Usually, but not always, I’m making stock, and for a nice chicken stock I take about 5 pounds of various and sundry chicken parts (feet are real good for stock, btw) and first bring them up to a boil. Reducing the heat, I then spend the next 30 – 45 minutes or so skimming the crap out of the crap that rises to the top. Chinese stock makers will sometimes bring the chicken and bones to a boil, pour off the water, rinse it and start all over with cold water – but that still requires skimming, so instead I skip that step and just skim furiously. Once I’m pretty sure all that junk is gone, I add a little water back to the pot and bring it up to a simmer again. After about an hour, I add the mirepoix (a very cool French word) of carrots, celery and onion, along with a bouquet garni, which is another cool French term that means “garnished bouquet,” and is actually a bunch of herbs and things (flat leaf parsley, bay leaf, thyme and peppercorns) tied together in cheesecloth and simmered along with the other ingredients…

Let it all bubble slowly together (don’t boil it, please, though in school we did learn how to make an express stock, which boils rather rapidly) for another 2 or 3 hours, skimming occasionally (and if you were really adamant about the skimming over the first hour, there wont be much more to do) and tasting after about 3 hours total. I usually simmer it for a total of about 4 hours – your mileage may vary.

By the way, the question of whether or not to add salt in the beginning is much debated. Obviously, since the stock is going to be reducing, you have to be careful, because it’s pretty hard to judge how salty something is going to become as it reduces. Julia adds some salt, whereas Marcella doesn’t. James Peterson, in his well regarded book called Sauces, doesn’t. I do, but only a little bit. Remember, you can always add salt to the sauce or soup or whatever it is you’re using the stock for, but you can’t take it away – so salt carefully.

Then, once the stock is nice and tasty, but before it has reduced too much, strain it, first through a medium strainer to get rid of the solids, and then through cheesecloth or a chinois into quart containers ready for the fridge. Once chilled, the fat on top can be removed, and the stock frozen for future use, or used right away. If you want to keep it for a few days in the fridge, it’s best to bring it to a boil every 2nd or 3rd day, and use it before the week is out. It is not a keeper, unless it’s frozen.

Now that you’ve made your own stock, everything you use it in will be that much better – trust me. For instance, the other day for lunch, I decided to make a Chinese noodle soup (pretty similar to my old Jewish grandmother’s chicken noodle soup, though her use of bok choy was limited), with some Fuzhou dried noodles I had bought at a market up the block. Those noodles get soaked for a few minutes, boiled for a few minutes more, and drained. Along with some cut up cooked chicken I had in the fridge, a few heads of baby bok choy, scallions and a bit of cilantro, this is a soup I’m sure would do your grandma proud. And it’s 100 times better than anything out of a can or cube. 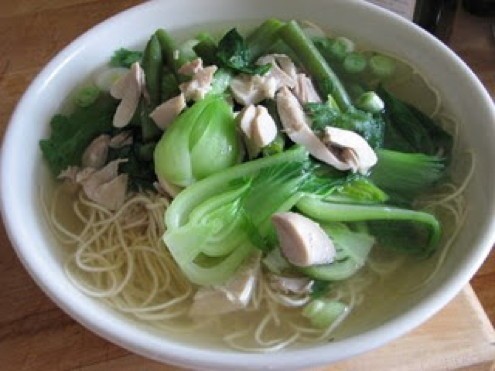 Culinary Christmas Gift of the Year: The SousVide Supreme