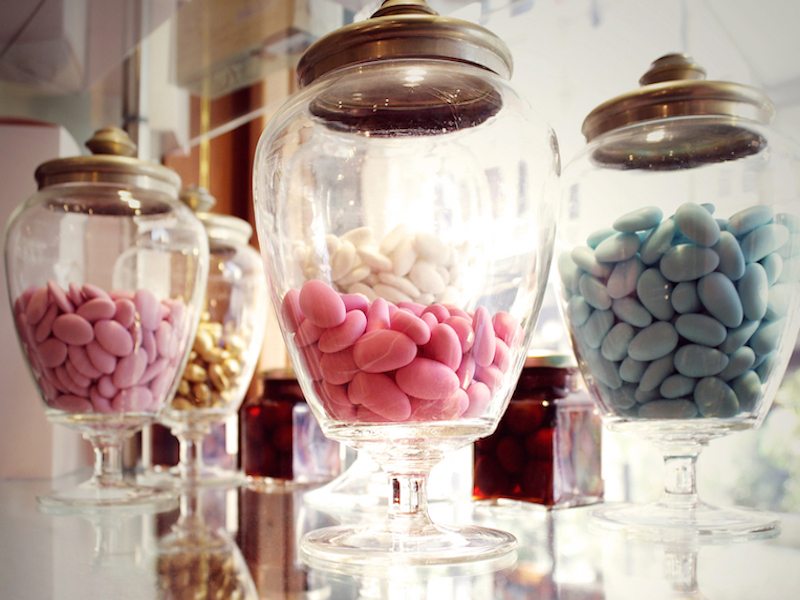 Piero Pardini is a free lance journalist and sommelier. He…

In Italy, the “Confetti” candies are the sweet symbol for the most important stages of life.

Photos courtesy of the Corsini family

Every significant occasion of an Italian is characterized by the color of a “Confetto”. Pink for the birth of a daughter; blue for boys; white for marriage; green for the engagement; red for a University degree; silver gold and white, respectively, for the 25th, 50th, and 60th wedding anniversary. There are also, according to the various regional traditions, a whole different set of colors used for other events, where, inside the sweet, there are several ingredients: anise, peanuts, fruit.

Traditional “Confetti” have two forms: smooth and crushed with a chocolate filling, and, the other smooth but with a shape more like a bean or a covered almond.

There is, then, a high-quality of “Confetti”: the famous Pistoia’s confetti, recognizable by the typical shape similar to a hedgehog.

This confectionery product is a true rarity. It is not at all comparable to the Italian traditional “Confetti”, industrial product, created with modern machinery. The “Confetto riccio” (“Curly Confetto”), is much more. It is the result of a hand-crafted candy that takes about ten hours to make. Expensive to produce, the sweet is white with a slight hint of vanilla, its characteristic is its round shape, totally irregular and lumpy.

Today, the confetti of Pistoia (from the name of the romantic Tuscan city where they were born) are handmade, created in the laboratory of the Corsini family, since 1918.

PP.: What are the origins “Confetti”?

GBC: It seems that the first “Confetti” were imported into our country from the east between 1100 and 1200 by the merchants of the Venice Republic. However, something very similar was known even in the period of the Latin, where a small berry aromas, like the coriander seed, was covered with honey and allowed to harden. Today, the oldest Pistoia’s Confetto has just coriander inside, a small berry from the botanical family of “Umbelliferae” whose flavor is very similar to anise, hence the name of the medieval “Anici confecti”.

PP.: Where does this special shape come from?

GBC: From my information, it seems that there was a custom during the holidays to throw sweet from the balconies into the cheering crowds. The shape was made so irregular to have a greater impact when thrown. It may seem strange, but that was the only reason.

GBC: The news has a certain date: July 25, 1372. The confetti, which at that time were called “anici confecti “,were offered to city authorities by the Opera of San Jacopo on the feast of the patron saint of the city. The “anici confecti” were prepared by the Corporation of Physicians and Apothecaries “.

PP .: Can you describe the process of creating confetto and what are the key ingredients?

GBC: With the rise of the first factories in Italy – in the mid-nineteenth century – the first Pistoia was made, the famous confetti. Inside a rudimentary copper pot was put an amount of sugar: the pot, suspended from the ceiling by a rope, was swung to a rhythm that gradually became more and more intense. At a certain point, were placed in the vessel of small amount of sugar that, by means of the oscillation formed the candy. The chronicles relate that in 1861, a master craftsman from Pistoia began to produce them successfully. This system has been perfected over the years. The copper pots have been replaced by rotating containers, always of copper, that are heated by gas flames, called “bassine”. The recipe is apparently very simple: in a first phase called “assottanatura” or “basting icing” the basic ingredient (or soul) of “Confetti” (ie anacino or almond etc.) is covered in the hot pan with a chrysalis sugar. Subsequently, from the rotating, they flush and then to drop, the sugar dissolves and cooks gradually. This sugar is called “sugar tipsy”. The sugar that falls increases the volume of the sweets, which continue to rotate in the coating pan for ten hours. The ingredients are always the same: water, sugar and the particular flavor that is being made. The secret lies in knowing how to add the right amount of time, water, sugar and be able to adjust the temperature as needed. ?The production of the sweet is done weekly and is made in small quantities, so that the customer can always benefit from a fresh and genuine product.

PP.: Your confectionery product has had moments of true fame. Federico Fellini, the Italian filmmaker, for example?

GBC: Federico Fellini was looking everywhere these particular confetti to shoot the scene of the Carnival of Venice in the movie “Casanova”, but he could not find them. Until Bolognini, a famous director from Pistoia, one day said: “Federico, call Corsini. He sends you a wagon of confetti”. And so it was. Our confetti entered the history of cinema.

VIN SANTO DESSERT WINE:
The type is either Secco (dry) or Amabile (mid-sweetness level) and is produced in grapes Trebbiano Toscano and / or Malvasia Bianca Lunga (min. 75%) with permission to use specially selected local green grapes from the province of Prato. After picking, the grapes are dried on straw mats or shelves in their living quarters, and pressure is applied between the 1st December in the year of harvest and 31th March this year after harvest. Vin Santo di Carmignano ranges in color from straw yellow to golden yellow and intense amber. The bouquet is ethereal, intense and characteristic. The taste is harmonious, soft and especially pronounced in the circular sweetish Amabile.

Piero Pardini is a free lance journalist and sommelier. He started writing about technologies (industrial automation, electronic and mechanical) and sports (tennis and basketball) until he decided to devote himself exclusively to wine, his passion. He writes for the official magazine of the Italian Sommelier Association (A.I.S.) "Vitae" and is also a marketing consultant for Italian restaurants. His favorite kind of wine to drink Dessert wines, hands down.