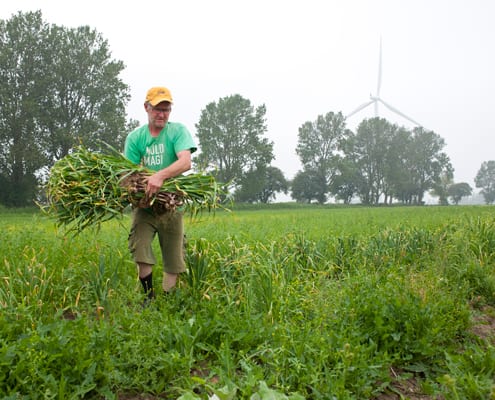 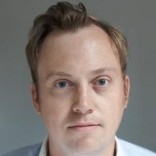 Meet Søren Wiuff, the farmer who delivers vegetables to noma.

“Piss off you damn birds!” Søren Wiuff honks the horn and parks his car on the gravel tracks next to his cabbage field. He is shouting at a dense black cloud of rooks hovering above. “They just want to have some fun,” says Wiuff, who is wearing a yellow cap with the logo CIA (Culinary Institute of America) over his trimmed grey hair. His green T-shirt carries the words Muld, Magi & Mad (soil, magic and food). Back in the car, Wiuff calls one of his assistants. “I need you to take two birds from the freezer and put out on the cabbage fields because these black birds they destroy everything.” Wiuff knows that the only thing that will put the frighteners on the rooks is to see two dead colleagues ceremoniously hung out as scarecrows.

When Wiuff drives a few yards further down the track, a deer runs across, narrowly missing the car bumper. “This,” he says, “is a unique workplace.”

Everything about Søren Wiuff is brilliantly unique. He’s the farmer who more than any other producer has left his mark on the evolution of gastronomy in Denmark over the past 10 years. The experimentation happening in the restaurant kitchens have been matched by his appetite for exploring the culinary potential of unheralded plants and herbs. He has been a key supplier to the restaurant Noma, with René Redzepi hailing Wiuff as the world’s best farmer. “He is a firebrand who helps drive agriculture towards great taste through diversity and innovation,” Redzepi wrote in the cookbook Noma: Time and Place in Nordic Cuisine. “He is an inspiration and a friend, and always ready to help Noma on the way forward.”

Wiuff has been dealt a fortunate hand by Mother Nature. His farm is situated in the north-western part of Zealand in what is known as Lammefjorden, an inlet which was drained as recently as the 1940s and now provides some of the most nutritious and fertile ground for crops to thrive in. You can still see flakes of mussel shell when you sieve through the sandy soil.

While Wiuff used to do things a bit more conventionally and relied on carrots as the mainstay of his production, he now grows more than 120 wild and cultivated crops.  “Slowly and easy I have moved away from this control gene which comes with farming,” says Wiuff. “It’s to do with a desperate attempt to control and steer nature towards where you want it to go, but that is very difficult. I think that the more I let go, the more I get in return. There is almost a religious aspect to this”

The chefs in Copenhagen certainly sing Wiuff’s praises when his delivery van does the rounds on the restaurant circuit in the evening. As much as his name has been associated with the rise of the new Nordic cuisine, Wiuff doesn’t care much for celebrating the zeitgeist. “I think it’s OK to talk about the new Nordic kitchen but it’s just not interesting. What’s interesting is this.” He points to a field of tiny leeks, camomile and hop clover flowers. To the untrained eye, it looks like an untamable mess. To the expert eye, this field is a microcosm of the biodiversity that Wiuff is trying to harness.

The leeks are marvelous creations, anchored by tiny bulbous onions which have a zingy bite. “Nobody has put this on a plate yet but it will come,” says Wiuff. “I have made them like this for 10 years. It started as a bit of a mistake when I was getting divorced the first time. I had all these seeds I hadn’t planted in the spring so instead I planted them in August. It broke the natural rhythm.”

Breaking rhythms have yielded rewarding results for him and the chefs he works with. When Wiuff didn’t have time to harvest a batch of carrots, they turned gnarly and brown after having been left in the ground for more than a year. At Noma, Redzepi bathed them in goat’s butter, sautéed them for a couple of hours, dressed them with sorrel, and soon had critics swooning over the wondrous qualities of the ‘vintage carrot’.

One of Wiuff’s latest projects is hemp. He has been granted permission to grow it for feedstuff, and his liberal interpretation of that remit  includes human consumption. Not that Wiuff is a budding Walter White. He uses the variety Fedora 17 which is so low on THC that the only thing that will get you high is the flavour of the plant.

At Dragsholm Castle, a few miles up the road from Wiuff’s farm, Claus Henriksen is using this flavour to create gastronomy. Henriksen, a prodigiously gifted chef and Noma alumni, heads up the fine-dining kitchen at the 800-year old castle and gets first dips on the produce from his neighbour and close collaborator Wiuff. In the castle’s basement restaurant, Henriksen opens an old cake tin. Out billows the smoke and smell normally associated with a secretive stroll down Christiania’s Pusher Street in Copenhagen. He has stuffed a soft cheese with hemp, smoked it in the cake tin, and served it with crispy hemp seeds and leaves. It’s fresh, nutty and delicious.

If you visit Dragsholm in late spring you will find another Wiuff speciality on the menu: white asparagus. As much as Wiuff’s loathes the labels people like to pin on him, he is inevitably known as aspargeskongen (the Asparagus King) due to the phenomenal quality of his produce. His asparagus are hand-picked and the season only runs until the end of June so that the plants have time to reload on energy before next season’s harvest. His 20 acres of asparagus fields can yield up to 800kg in a day.

Wiuff is poking through the asparagus beds with a slim shovel-like gadget. At first there is no result; his pickers have done their job well. Then he spots a couple of asparagus sticking up through the soil bank. “Look at them,” he says addressing his crops, “standing there laughing at me.” He doesn’t mind that the tips of the asparagus peer up into the sunlight and pick up a slightly purple hue. “I like when they have a bit of colour because I actually find a completely white asparagus a bit vulgar – especially if you have 100 of them.”

The juicy crunch of a raw white asparagus is anything but vulgar. It’s blissful. They have a rich sweetness and an almost cleansing mineral taste. Henriksen uses them for his signature dish: grilled white asparagus and shavings of raw asparagus served with herb emulsion and croutons. When Wiuff invited his Lithuanian pickers over to Dragsholm, Henriksen served them this dish.

“I almost started crying,” says Wiuff. “You know the feeling when you like good music and get emotionally affected by it? I had never experienced that with something I ate, not in that way. 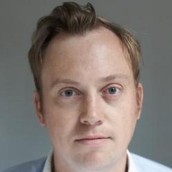 A Look Inside Clou