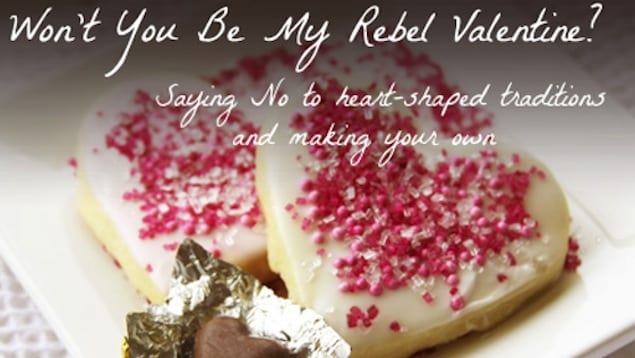 Denise celebrates Valentine’s Day alongside her Valentine without all the commercial hearts.
By Denise Sakaki 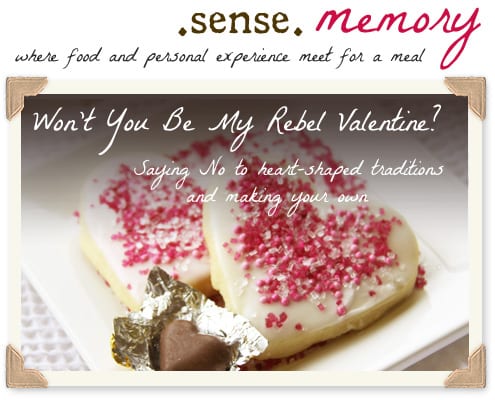 I’ve never gone out to dinner on Valentine’s Day. There, I’ve said it. And it’s not for a lack of having a significant other – the Mister and I are card-holding members of the Ol’ Ball n’ Chain Club, yet for all my years of being attached, February 14th seems like the most unappealing time to have a nice dinner out. But does it mean I’m some kind of Valentine’s Day Grinch? Hardly. I’d like to believe I’m more of a Valentine Rebel With a Cause.

For a holiday that’s supposed to be about love, it’s riddled with angst, for singletons and coupled individuals alike. Over ten percent of women admit to buying and sending flowers to themselves, just to stave off the pity stares of office mates wondering if they’ll be alone on the 14th. As for the women with a mate, fifty percent admit they would end their relationship if their significant other ignored Valentine’s Day, turning innocuous boxes of chocolate and bouquets of roses into hostage negotiation terms. Nearly half of the coupled populace will be clamoring for reservations on February 14th – probably more this year, since Valentine’s Day falls on a Friday. The holiday feels like a pressure cooker — a 13 billion-dollar pressure cooker — that focuses so much expectation on a single day. In a perfect world, it would be something intimate and personal, instead of trying to get a seat at your favorite restaurant amassed in chaos on one of their best, but most hectic nights of the year.

Despite a reputation as a racket for the gift industry, it wasn’t just the name of a 1920’s mobster massacre, St. Valentine was a real person. And he wasn’t a scantily-clad little cherub with wings and a cute bow n’ arrow. Valentinus was a third-century Roman saint, associated with courtly love, who was commemorated upon his death, on February 14th. Detailed history of this person has fallen into apocryphal accounts, where he may have been two separate people, but the patronage of St. Valentine remains the same – he is the saint of engaged couples, happy marriages, and love itself. Nowhere in that patronage does it include: long-stemmed roses, overcrowded restaurants, or chocolates where you know you’re going to throw out half because you don’t like the ones with nuts.

For all my eschewing of traditional Valentine’s Day rituals and Grinchy grumblings, I genuinely like the holiday. My first Valentine’s Day with the Mister set the course for all the years to come, even if it makes us somewhat misanthropic for the holiday. Not unlike many other people, we try to keep the day personal with meaningful gestures, no expectations of gifts, and no going out. Years ago, I was living in a small apartment with an even smaller kitchen. I didn’t have a lot of cooking equipment, short of a rice cooker and a fire hazard that resembled a toaster. The Mister secretly took the day off, cooked an incredible meal from scratch, including a lovely chocolate torte, and stocked my kitchen with some much-needed gear, like a food processor and a set of mixing bowls. No, I didn’t even have mixing bowls. It was better than Christmas. I came home early, thinking he wanted to go out to dinner, only to be surprised with one of the most heartfelt meals I can remember, and my first decent steps towards having a real kitchen. My Valentine’s Day contributions are nowhere near as over-the-top, but in the way he appeals to my appreciation for surprising gestures, I opt for his best-loved comforts – I’ve made his favorite desserts, like a carrot cake with about a million ingredients that takes all day to make, but it’s worth every bite. Or a plain take-out cheese pizza with an arrangement of toppings in a heart-shape. Yes, it’s silly stuff, but it’s our silly stuff.

I look forward to Valentine’s Day with a Billy Idol rebel-yell. It affords people the opportunity to celebrate a person in their life in a more personal way than birthdays or family holidays. I’m not ashamed to say I’m excited to stay home, to prepare something special or try a new recipe, because sometimes we need a sentimental holiday to inspire us. I may never see the inside of a restaurant on Valentine’s Day, but I don’t feel like that’s ever taken the romance out of things – I think it’s kept it exactly where it should be, right between the two of us.