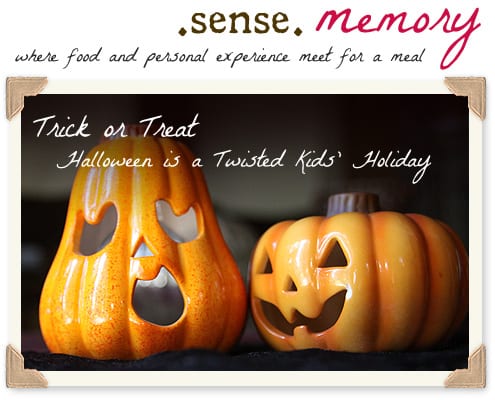 It shouldn’t be a surprise that a holiday associated with monsters and ghosts has decidedly mature origins, and it lends itself to the belief that deep down, we all seek a bit of a scare now and then.
By Denise Sakaki

Trick or Treat, Smell my feet, give me something good to eat. If you don’t, I don’t care, I’ll pull down your underwear. I never quite mustered up the courage to get through that whole limerick when doing the annual begging for candy in our neighborhood when I was a kid every October 31st.  Halloween was my favorite holiday because it was all about being a kid and breaking the rules – free candy to gorge upon until the sugar high lets you see into the ninth dimension, running around the neighborhood in the middle of the night with other kids, staying up way past your bedtime even if it was a school night, and dressing up in a costume that let you be something different.  For that one precious night out of the whole year, every “don’t” your parents said became a “do,” as long as Mom got at least one good picture of you in your costume for the photo album, since it took her a month to sew that crazy outfit from scratch.

The only steadfast rule was not being able to eat any of the candy until we brought the loot home, so that the parents could carefully check everything and make sure there wasn’t anything amiss. It seems like a common sense thing to do, but you start to realize that most children grew up under the shadow of urban myths surrounding Halloween candy. Razor blades buried in apples, hypodermic needles inserted into candy bars, sweets of all shapes and sizes laced with everything you can imagine, from cold medicine to heroin. These are scenarios that go beyond whatever fear the Creature from the Black Lagoon could instill. And I’m fairly sure Count Dracula would never give a candy bar laced with cocaine to a little kid – even the undead have scruples. But these were the commonplace warnings we grew to expect every Halloween. Unlike any other sugary kid-friendly holiday, Halloween has maintained an underlying specter of fear and paranoia. It makes you wonder how the heck Halloween ever became so kid-friendly?

For the most part, those terrifying tales of candy tampering are just that: tales. Despite the proliferation of these food horror stories for decades, there has been no evidence of an anonymous poison-toting villain, randomly filling wrapped candies with death and destruction for trick-or-treaters. The urban legends may have originated from an incident in 1964, in the suburbs of New York State, where a woman named Helen Pfeil, was handing out inedible items as treats including steel wool, dog biscuits and insect poison tablets. Taking “cranky” to a whole new level, Old Lady Pfeil was miffed over kids being too old for trick-or-treating, so she gave out these treatless tricks to teens, making it clear they were not meant to be eaten, especially the insecticide, which was clearly marked as “poison.” While no one was harmed in her act of Halloween defiance, she was still charged with endangerment, and was likely the genesis of the poisoned Halloween candy urban myth.  While there have been a handful of unfortunate deaths during Halloween where tampered candy was involved, they have been attributed to premeditated acts, such as the poisoning of eight year old Timothy Marc O’Bryan, in Houston, Texas, in 1974. He was given cyanide-laced Pixie Stix candy, which led to the arrest and conviction of his own father, Ronald Clark O’Bryan, who had an unusually large insurance policy taken out on his son.  A tragic and incomprehensible crime, it wasn’t a wide-scale poisoning meant to affect random victims the way most urban legends threaten. If anything, the murderer likely used the myth of candy tampering as subterfuge in the hopes of getting away with his crime.

Long before children were dressing like Ninja Turtles and begging for sweets, tracing Halloween’s roots leads to superstitious dark origins that are hardly G-Rated. This only adds to the wonder over why dressing up your toddler like a cuddly black cat or little witch is “cute” and not “freaky and morbid.” The ancient Celts are considered the first to celebrate Halloween in the form of their harvest season known as Samhain. It was a time where the Celts believed the boundary separating the worlds of the living and the dead weakened, allowing for deceased spirits to return and cause havoc like ruined crops or plague. Samhain rituals often involved late night bonfires to ward off vengeful spirits, and people took to wearing masks to resemble the dead, to either appease or walk unrecognized amongst them. The wearing of costumes and begging from door to door has origins in the Middle Ages, when the holiday became Christianized into multiple days of celebration, and followers took on the practice of “souling.” The poor would go from door to door on Hallowmas on November 1st, asking for food in return for prayers for the dead on the following All Souls Day, where recently departed souls are honored before their ascent to Heaven. October 31st was far less charitable – much closer to its original Celtic roots, All Hallow’s Eve was reserved for spirits who would walk the earth and exact revenge upon their enemies, and if one feared retribution, they wore masks so that they would not be recognized. From rueful, vicious ghosts, and piety in return for being spared an undead vengeance… to bringing the kids dressed like superheroes to the mall to get a few handfuls of candy at the Baby Gap and maybe grab an Orange Julius on the way home. Apparently it took the suburbs to fully neuter a holiday that was associated with a few hundred years of some sinister and creepy stuff.

Even the story behind the jack-o-lantern has a touch of the macabre. I remember toasting pumpkin seeds and sawing away at a giant squash every year. I had no idea I was proliferating an old myth of a man’s soul and his tango with Satan.  The legends vary, but the general theme is about a man named Jack who wanted to keep the Devil from taking his soul, so he devised a way to trick ol’ Scratch into a bargain that would prevent his soul from being reaped. The Devil, not being particularly fond of getting one-upped, agreed, knowing Jack’s tarnished soul would find no place in Heaven. So when Jack’s time on earth expired, both Heaven and Hell refused his soul, and he was left to wander in darkness. An ember fueled by the flames of Hell was given to Jack by the Devil, a final insult to remind Jack of his foolish bargain, which he used as a lantern, in a hollowed-out turnip (I know, not a pumpkin, go figure), to light his way as his soul wandered for an eternity. And all this time, my greatest quandary over a carved pumpkin was: frowny-face or happy-face?

It shouldn’t be a surprise that a holiday associated with monsters and ghosts has decidedly mature origins, and it lends itself to the belief that deep down, we all seek a bit of a scare now and then. I probably won’t think twice when I tuck into my third snack-sized peanut butter cup, wondering if I just gulped down a razor blade, but I may sleep with all the lights on, just to ward off those wandering spirits on All Hallow’s Eve.