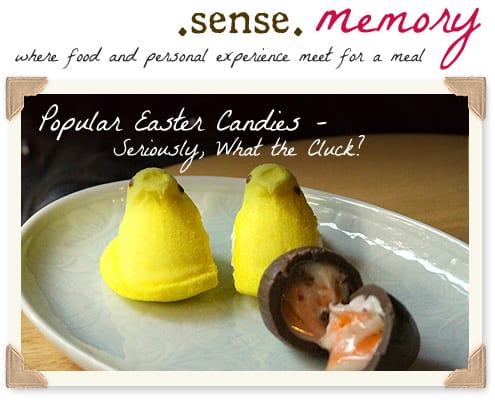 A connection to the holiday’s religious origins is a stretch, but the springtime palette of colors makes for some temptingly pretty candy. I remember having a colorful basket full of sweets waiting for me Easter morning, along with a search for the decorated eggs we dyed the day before. I didn’t think about the holiday’s meanings, just tracking down those eggs and the reward of taking that first, luscious bite of the chocolate rabbit – ears first, of course. The colors and shapes of Easter candies were tantalizing, yet for as long as I can remember, two of the most popular candies are ones my sweet tooth struggles to come to terms with: marshmallow Peeps and Cadbury Crème Eggs.

Marshmallow Peeps, cute baby chick-shaped marshmallows dusted in a covering of bright yellow sugar, sold in rows that you pull apart to eat. They epitomize Easter candy and no basket seems complete without a small flock of candy chicks staring at you with their brown, beady eyes. First made back in 1953, in the Just Born factory in Pennsylvania, the whipped, gelatinized sugar Peeps were hand-formed before the popularity of the candy expanded them to mass production. They’ve since evolved from yellow marshmallow chicks to chicks of many colors, bunny shapes, and other holiday-themed shapes like pumpkins for Halloween and trees for Christmas. For all its perennial marketing, Easter remains the eminent domain of Peeps. A subculture has evolved around this candy, inspiring people to make diorama sculptures out of the candies, and the urban myth surrounding its supposed indestructibility has even prompted jewelry makers to incorporate Peeps into wearable art.

For as many years as I can remember, I am drawn in by the Peeps’ marshmallowy siren song… and inevitably dashed into the rocks, each and every time. Even as a child, I was disappointed with the gooey but joyless marshmallow filling, and gritty, sand-like mouthfeel of the all-over sugar coating. Frankly, they’re awful, yet I keep returning to Peeps, like going back to a bad boyfriend that I know is no good for me. Maybe it’s the cheery, sunshine color, or its voluptuous marshmallow curves, but I find myself getting a box of yellow peeps every Easter, thinking, maybe… just maybe… this year I’ll learn to appreciate these treats. My mother loves Peeps – she would look forward to indulging in the pillowy-sweet marshmallow confections every spring. I genuinely envied that appreciation. I still do. Easter is a holiday that’s all about hope, and so this year, I approached the box of marshmallow chicks staring up at me through the cellophane, with the optimism that this year would be the one that I finally fall in love with these adorable candies! I took one bite and… disappointment. The joy so many others get from eating Peeps continues to elude me for another year, plenty of time for me to forget my distaste for these things and try eating them next year.

I turned my sugar-crazed gaze towards another signature Easter candy: Cadbury Crème Eggs. I always knew Easter was around the corner when their signature commercial with the chicken-clucking rabbit would start to appear on television. I laugh every time I see that ad, I can’t help myself. The hefty-sized milk chocolate-shaped egg filled with a fondant dyed like a raw egg was created by the United Kingdom-based Cadbury candy company in 1963, originally under the name Fry’s Crème Eggs, before eventually being called Cadbury Crème Eggs in the early 1970s. It always seemed like the most bizarrely literal candy concept – I could accept an egg-shaped chocolate candy, but a viscous filling resembling the yolk and albumen of a raw egg? Candied salmonella comes to mind. As a child, I only liked eating scrambled eggs, so the notion of candy with a raw egg-like filling couldn’t have been less appealing, and so I never partook of the sugary delicacy… until this year. I mentioned to a few friends that I’d never had a Cadbury Crème Egg before and I was met with surprised, junk food-outraged reactions. Apparently I was missing out on a singular candy experience.

It was time for an Easter first – I would have my first Cadbury Crème Egg. I approached the colorful foil-wrapped egg with trepidation. A flood of childhood memories struck me – Easters past, where I was given the candy as a gift and I couldn’t get rid of the thing faster, as if someone handed me a grenade with a missing pin. I clearly had a guttural reaction to the weird raw-egg candy. The milk chocolate shell is fairly sturdy, so I used a knife to crack the egg down the center, to get a better examination of the inside filling. I was surprised at the bright orange color of the candy “yolk”, swirled in the opaque white fondant. It was thick, and not runny at all like an actual egg. It reminded me of Silly Putty, an inconceivable goo, which also comes in an egg container, oddly enough. I took my first bite of the crème egg and it was an explosion of terrifying sugary sensation. I could, for the briefest of moments, understand people’s love of this candy – it’s like the Breaking Bad of sweets, it’s such an intense sugar high. And then it gets all Trainspotting-wrong, when you realize you’ve just shorted out all your tastebuds from the overwhelming sensation of sweetness. The fondant coats your mouth like sugary napalm, you don’t even recognize that the outer shell is chocolate. I had a cup of coffee handy, which made for a perfect bitter-flavored chaser to return balance to my taste universe. But there it was – I had my first (and last) experience with one of Easter’s most popular candies. And despite all previous experiences, I will no doubt be buying another package of Peeps same time this year.