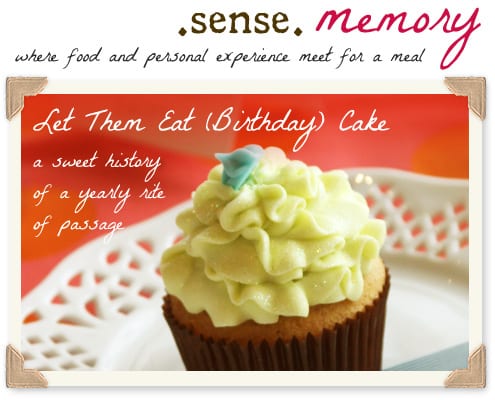 Traditions and tastes may vary, but hopeful wishes for health and happiness served up with sweetness is something that transcends both time and cultures.
By Denise Sakaki

I looked forward to it every year… paging through the Wilton cake decorating catalog for birthday cake inspiration. Dome-shaped cakes that looked like Cinderella princesses. Sheet cakes turned into flowery hills surrounding fairy tale castles. I got a sugar contact-high dreamily staring at the catalog pages. My birthday would often fall near Easter, so I associated the springtime pastels and egg or bunny-themed cakes with My Special Day, and bless my Martha Stewart-like mother, she would make sure every cake was some spectacular homemade pastel spectacle. I would marvel at its perfection and always requested a piece cut from the middle, for that perfectly balanced frosting-to-cake ratio. The horrible irony was that I was more about the ice cream than the cake – shh, don’t tell Mom – but I always got such a thrill over the presentation of a cake ablaze with candles. It was the one blessed time of the year where children are encouraged to confront open flames. Whether it was my birthday or someone else’s, a cake wasn’t just dessert, it was an event, and a grand one, at that. As another birthday draws near, I thought more about these sweet celebrations and why it’s just not a party without cake.

The history of a birthday cake is older than you’d think – the tradition of celebratory sweetened cakes can be traced back as far as the Ancient Greeks, who would make them for weddings and tributes to the deity Artemis, the goddess of the Moon. They would make round moon-shaped honey cakes, leavened with yeast and filled with nuts, and present them annually to her temples. The concept of candles in a cake could be credited to this Greek tradition, as they would place candles in their cakes for Artemis, so that they would glow like the moon. Cakes to celebrate a child’s birthdate didn’t appear until the Middle Ages, in Germany, where birthdays were celebrated as Kinderfest. The sweet, layered cakes were called Geburtstagorten. By the 15th Century, bakeries in Germany had figured out the marketing potential for occasion-based cakes, offering single-layer sweetened cakes for birthdays and weddings. Cakes became elaborate with more layers and decorated with sweet icing through the 17th Century, but it remained an indulgence of the wealthy and represented a sign of status. It wasn’t until the Industrial Revolution where materials and production methods became more readily accessible that the masses could follow Marie Antoinette’s famous saying, “Let them eat cake.” The actual phrase, “Happy Birthday” never appeared on cakes until the 1900s, as the phrase hadn’t become tradition until the song “Happy Birthday to You,” became popular.

The birthday cake is more than just a sweet treat – it carries a ritualized sense of passage and fresh hopes for the year to come. For the Greeks, the candle-topped cake wasn’t just a tribute to their moon goddess, they believed the smoke would carry their prayers to Mount Olympus. The notion of candles representing its celebrant’s age was recorded as far back as 1746, for the German Count Ludwig Von Zinzendorf’s lavish birthday ball, where a massive cake was made in his honor. A single candle was placed in the middle, per the German tradition of it representing the Light of Life, and multiple candles representing each year of the count’s life decorated the epic torte. Sometimes it’s not what’s on the cake that predicts one’s future, but what’s in it – Medieval England started the practice of mixing symbolic objects in the batter, such as rings, thimbles and coins, to foretell what was to come for the cake-eater. A coin signified wealth, rings represented marriage and the unlucky thimble-finder would never marry. Somehow the notion of a cracked tooth was never in any of these soothsaying food-tampering habits.

Cake is more of a Western/European tradition, but other cultures celebrate with sweet treats for birthdays as well. China’s birthday boys and girls are rewarded with a sweet pastry bun called a sou bao, filled with lotus paste, shaped and decorated to resemble a peach. Pavesh, a rice and milk dessert, is served in India.  Russian children are given fruit pies with birthday messages carved into the crust. While I wouldn’t pass up a sweet rice pudding or a fruit pie for my birthday, I was most curious about how the tradition of cake and ice cream came to be. In my mind, it wasn’t a birthday without a bite of spongey, sweet cake combined with the chill of creamy ice cream. European Renaissance gourmands would often pour a rich whipped cream sauce over their baked desserts. The practice continued through the invention of frozen custards, which likely evolved into the pairing of cake with ice cream.

Indulging in a nostalgic moment, I can still recall many birthdays past, with the “ooh-ahh!” unveiling of the perfectly decorated cake aglow with candles, the smoky, burnt smell from a freshly-made wish all mixed with the scent of sweet icing, and the anticipation of that first bite of cake mixed with cold ice cream. Traditions and tastes may vary, but hopeful wishes for health and happiness served up with sweetness is something that transcends both time and cultures.