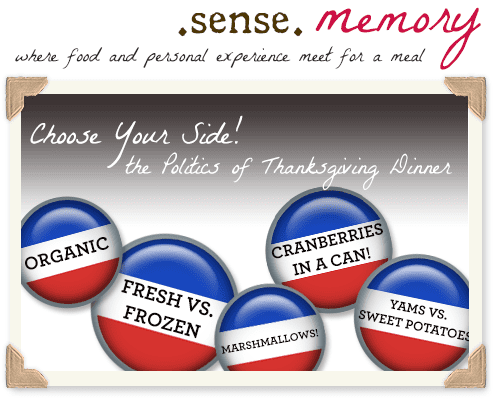 Denise Sakaki on what might just be the most important election (or at the very least, the most delicious) of this November. Thanksgiving Dinner choices.
By Denise Sakaki

My Fellow Americans… we stand as a nation of individuals faced with opposing views that can cut to the heart (and appetite) of the human soul. We are fast-approaching a strenuous point of division, something that pits families against one another, brother against brother, daughter against passive-aggressive mother in law: the body politic of Thanksgiving Dinner.

Fresh or frozen turkey? Heritage apple pie or canned pumpkin puree? Cranberry sauce or the gelatinous fruit cylinder with the rings of the can it wobbled from? Is everything organic, free-range and locally-sourced?? Thanksgiving is wrought with edible landmines, and as quick as you can utter, “Stove Top Stuffing,” everyone has a strong view over what truly qualifies as an official Turkeyday meal. I asked friends to share some Thanksgiving memories, and it’s ironic that the most food-obsessed holiday of the year has so much nostalgia over pre-packaged, canned, processed foods. Granted, it’s a generational thing; many of us grew up through the convenience food movement of the post-Baby Boom era, where anything that could be microwaved was a godsend. While the Pilgrims of Plymouth Rock certainly never worried about defrosting the turkey three days before roasting, the preparation of a Thanksgiving meal is loaded with shared memories over foods of convenience. Everyone has wondered at least once why serving the cranberry sauce in the shape of the can was considered a presentation flourish. A green bean casserole isn’t complete without being smothered in canned cream of mushroom soup with a sprinkle of crunchy toppings of unknown, pre-bagged origin. I think they’re onions, but I can’t be totally sure. Sweetened Jello desserts with fruit suspended like a Matrix melee being served right alongside the mashed potatoes and gravy. Grab the plastic tub of non-dairy whipped topping, it’s time to have pumpkin pie!  We’ve all been there at one point, and even as we obsess over whether or not the gravy can be gluten-free this year, we still manage to look back on those preservative-laden Thanksgiving meals with a wistful smile and a nod to guilty pleasures.

Like a contentious election year, no side dish garners the most polarized opinions than the notorious/glorious candied yams. Yes, the one covered with brown sugar and marshmallows that’s inexplicably served alongside the turkey and other savory foods.  The opinions of friends over candied yams ranged from, “Icky!” and “It’s crap,” to “Amazingness!” and “Good stuff for any time!” One friend remarked over its simplicity to prepare, and how it likely invigorated her Thanksgiving courage to tackle more complicated dishes. No one seems to lack an opinion over candied yams, as they range from using sweet potatoes, yams or kabocha squash, homemade versus store-bought marshmallows, and that it’s not Thanksgiving unless the marshmallows are set on fire. This dish fascinates me the most out of any Thanksgiving tradition, mostly because I never grew up with it, and every time someone would bring it to a holiday potluck, it would remain pristine, like some sugary centerpiece meant to admire…or a dead body in the middle of the room no one wanted to touch.

Frankly, I’ve never gotten on board with a side dish I’d argue qualifies as a dessert, but unlike so many of our space-age food conveniences, this dish has genuine American food history. Despite being called “candied yams,” its original incarnation was as a roasted sweet potato pudding, dating as far back as the 1800s, with recipes for glazed sweet potatoes making an appearance in the 1893 Boston Cooking School Cookbook.  Despite the assumption that yams and sweet potatoes are the same thing, they are from completely different plant families and the sugar content of sweet potatoes is higher, which heightened its appeal as a candied vegetable. Sweet potatoes are indigenous to the Americas, flourishing in warmer climates, hence its popularity in cuisine throughout the US Southern states. The marshmallow topping didn’t gain popularity until the 20th Century, where cookbooks like Vital Vegetables (1928) by Ida C. Bailey Allen include the addition of the sweet, airy confection. The nature of dishes to evolve and adopt shortcuts like the convenience of using canned vegetables is what eventually made candied yams what we see today, and it’s never lost its brown sugar-glazed charm with so many of its devotees.  I admit to remaining “undecided” if candied yams will have a place at our Thanksgiving meal this year, but I can at least appreciate the enthusiasm ensuring marshmallow-covered canned tubers will never die.

Despite differing opinions over what deserves a place on the Thanksgiving table — whether something came from a package or straight off the farm — it’s a meal that is steeped in ritual and the need for sanctity. The food conjures thoughts of home, of history and a nostalgia that keeps us coming back to the communal holiday table every year.