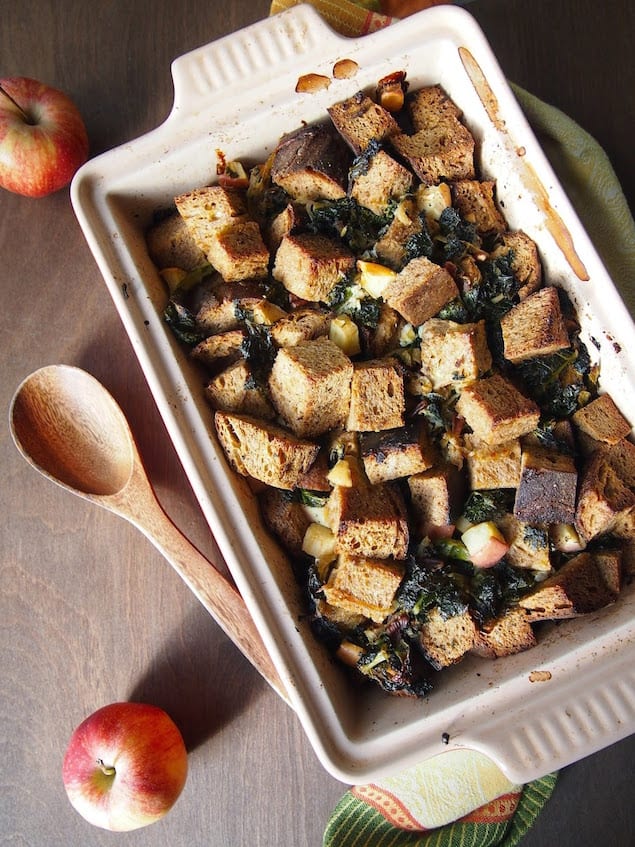 On Thanksgiving, I’m all about the classics – extra cheesy mac & cheese, sweet potato casserole and cornbread stuffing. And everyone knows, you don’t mess with stuffing. You can healthify green bean casserole or cranberry sauce and even pumpkin pie, but DO NOT TOUCH THE STUFFING.

Then I took a bite of this bad boy. With sweet, roasted apples, rich caramelized onions and a crispy, crust with a moist, tender interior, I would be mighty satisfied to have this as part of my Thanksgiving spread. And then eat it for every meal for the next three days.

After making this dish, I thought of a ton of ways to switch it up. If you prefer sausage in your dressing, spicy Italian sausage would be a natural complement to the bitter kale. For a “meatier,” yet still vegetarian version, use chopped mushrooms. Creminis or shiitakes would be my choice, but even regular white button mushrooms would go great.

P.S. Leftovers are really good topped with a fried egg. But what isn’t?

P.P.S. I use both dressing and stuffing interchangeably, and I think I spent more time debating which term to use in this post than actually writing it.