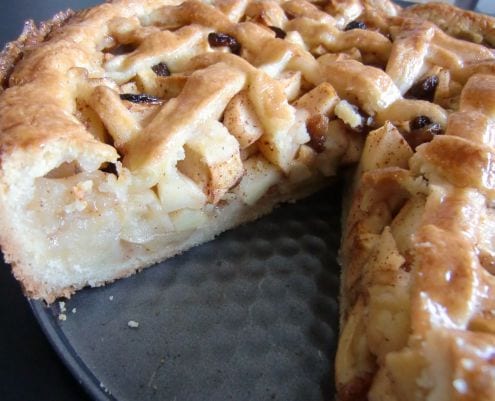 Apple pies were made in Europe long before the colonization of America begun, recipes dated as early as the 14th century have been found. It probably already existed before the recipe was written down and each region/country had their own way of making these pies, depending on their taste and the available ingredients. But when these people started to come to America in the 17th century as settlers, they did not find any apples, so they could not make their beloved apple pie. Seeds and seedling apple trees were brought from Europe, but did not flourish at first because there were no bees to pollinate the flowers. So bees were brought from Europe as well. When apples finally became available, they were mainly used for making cider. It wasn’t until the 19th and 20th century that apple pie became a symbol of American prosperity and national pride, merging all the European regional varieties in one American favourite.

In the Netherlands, apple pie is one of the most popular pies. You can buy it everywhere in supermarkets and bakeries, and apple pie topped with whipped cream is the default option for having something nice with your cup of coffee in a café. A coffee house not serving apple pie is virtually unthinkable. And it is a favourite for serving on birthdays as well.

It is funny that if you search for Dutch apple pie recipes (in English) you find something that a Dutch person would not call apple pie at all, but ‘appelkruimelvlaai or applekruimeltaart” (apple streusel pie), which is quite different from a real apple pie… also very nice, but not the real thing. The following recipe will give you the authentic Dutch apple pie: quite a thick, soft crust, filled with apple pieces flavoured with cinnamon, lemon, sugar and raisins, topped with a lattice, eaten either warm or on room temperature with or without whipped cream. 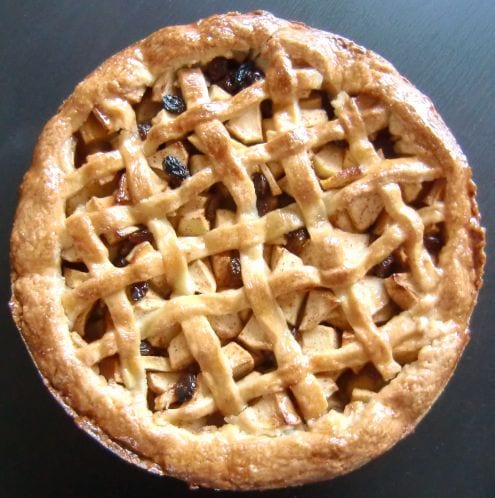