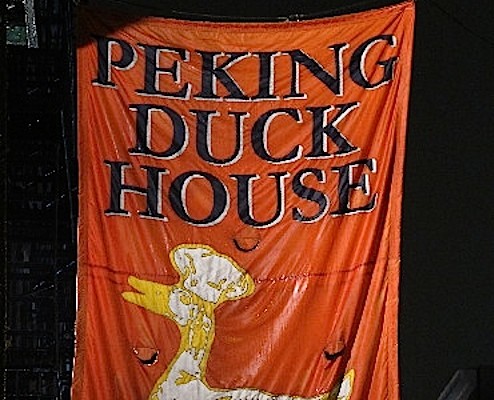 There’s something to be said about a restaurant that you can rely on.  Especially if that something you rely upon is a particular dish that you want to be good each and every time you order it.
By Mitch Weinstein

In NYC’s Chinatown, there is just such a place. Strangely, or perhaps not so much, it’s eponymously named after its most famous dish, Peking Duck.  Now, you have to understand – I eat in Chinatown – a lot.  Most of it’s C and below level stuff, but I do have some faves (can you say NY Noodletown?). We live in Chinatown. I get annoyed by Chinatown and its profusion of crappy restaurants using the cheapest raw materials they can find.  But I love Peking Duck House.

Peking Duck isn’t one of those dishes that you can just “throw together” or “whip up” at home. It involves inflation of the skin, scalding, hanging, dripping, roasting, pancake making – basically, just too much damn work. This ain’t no 30-minute meal, if you get my drift.

Enter Peking Duck House. In business for over 25 years at 28 Mott St. in NYC (there’s also a midtown location), I recently reacquainted myself with the place, after a long hiatus, when a friend wanted to go out for…guess what?

So off we went, 3 or 4 of us from the building.  And all I can say is this place totally rocks…

for the Peking Duck at least.  I’m not responsible for the rest of your order.  Remember, the whole of Chinatown is fairly mediocre; the whys of that are a subject for another post (lousy cooks, shitty ingredients – you be the judge).

The way the menu at Peking Duck House is set up, they try to trick you into ordering a lot more food, for a lot more money, than you really need.  The “special house dinner,” or the “Peking Duck dinner” are just money grabbers, so do as I do.  Order a whole Peking duck, a couple of apps – say pickled cabbage and mock dock made from tofu skin, a safe vegetable dish (forget about stuff like snow pea leaves – not gonna happen) and another stir fry and you’ll easily have enough food for 4 people.  And it’ll end up a lot cheaper than the dinners they put together for you.

What emerges from the kitchen around 15 or 20 minutes later is a thing of beauty. All glistening, drippy, and mahogany. Of course they show it to you, and then a guy with really good cleaver skills expertly cuts the meat and skin off the bone, till all that’s left is the carcass.  A few times I’ve ask for the carcass to go, and get some strange and annoyed looks, but that’s duck soup…and here’s our duck, all cut up and ready to go… 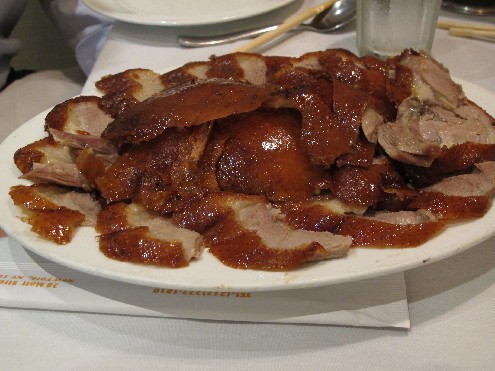 Then it’s all you, brushing your pancake with hoisin sauce, getting the right percentage of meat vs. skin, adding the scallion flourish, the rolling up of the package and taking that first bite of one of the still great dishes in Chinatown.

How to Make Peking Duck