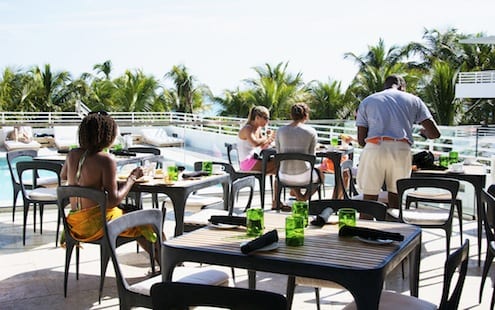 We sat upstairs, in a modern and rather minimalistic setting with a pool view. It was a cool, lazy day with some guests still ordering things from the breakfast menu when we arrived for lunch.

The Cast Iron Seared Sunshine State Frog Legs were bathing in Florida orange and lime leaves and served with a spicy almond-jicama stir-fry. The frog legs were truly exceptional: delicate, crunchy-soft and mild with a texture that was close to perfection. First-time frog-leg-eater, Miss I, could not believe that they could taste this good. It was a handsome dish too, decorated with micro-greens and stalks of lemongrass. The jicama fries (a sweet, root vegetable that looks like a turnip) were also lovely; eating them was pure pleasure.

Moments later, we ordered The Sticky Guanabana Glazed Ribs which were served with green papaya slaw. Talk about sticky-smoky goodness! The ribs were the right texture and ratio of fat to lean, and that meant great flavor on the plate. Guanábana is the Spanish name for soursop, a fruit whose flesh consists of an edible, white pulp and inedible black seeds. It has a flavor reminiscent of a combination of strawberries, pineapples with creamy notes of coconut and bananas. Imagine turning guanábana into a glaze accompanied by a refreshing slaw made of papaya. Sweet!

Pollo a la Brasa, a Peruvian inspired grilled chicken dish was chicken bliss.  The chicken was marinated for 24 hours and slow roasted and served with mashed potatoes and tiny whole purple and golden potatoes. It is hard to explain the effect this dish had on the table. Total silence as everyone partook of the crispy chicken and soft potatoes. Comfort food at its best.

The most unusual dish was the Meadow Farms Duck Egg-Tomme Cheese Broil, guava duck confit & patio rosemary dip toast. Eggs and guava is just a most unusual combination that takes getting used to.

For dessert we indulged in the Dominican Republic Chocolate Cake. Such a pretty cake topped with a ganache and served with expresso ice cream and adorned with red-red raspberries. In all honesty, I just got a bite of this. I left the table, busy taking pictures and by the time I returned, it was all but gone, totally scoffed and demolished by the kids.

Florida Cookery is the brainchild of Chef Kris Wessel. The restaurant is named after a local cookbook his grandma used back in the ’40s.  He has a special affinity for the cuisine that comes from the region as it is deeply connected to his family-roots. In his opinion, real South Florida cuisine weds Caribbean, Latin America, South and Northeast American flavors.

In Chef Wessel’s own words:

“That’s why I’ve created Florida Cookery: My culinary love letter to the state of Florida.

In short, you’ll find authentic Florida cuisine – the food I love best, the food I grew up with, and the food I would proudly serve my own family.”

Florida Cookery is open for breakfast, lunch and dinner and has a Kid’s menu, inside, outside and pool dining. Don’t miss it!