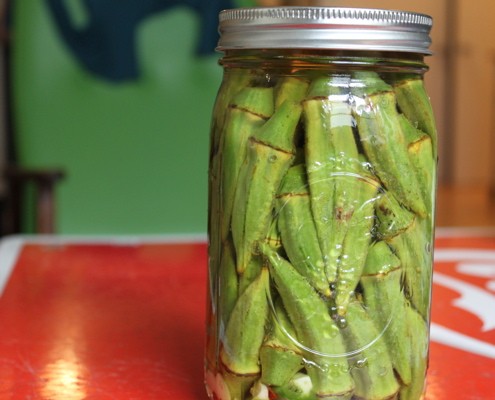 I opened the fridge to realize we were out of homemade pickles. I proceeded to pickle everything in sight.

I love okra. I have long been absolutely obsessed with it pickled, fried and stewed. But, I’ll admit, I’ve never worked with it in my own kitchen. It seems tricky, too easy to make slimy and unappealing. When I saw a little box at the farmer’s market a few weeks ago, I decided it was time to give it a try. It should be noted that this occurred in the deepest throes of panic, upon realizing I was running out of homemade pickles. I think I pickled eight vegetables in one day. I fell into a groove, mixing brine after brine, jars cooling all over the apartment. It smelled like vinegar in here for days. So, basically, I was a happy camper.

The recipe I was working with was for four pints. I split that in two to pickle a quart. Somehow, there was so much extra brine leftover, that there was enough for a whole extra pint. With that, I made my favorite new cocktail garnish that I will tell you all about next, so don’t throw it out!

Print
Prep Time
10 mins
Cook Time
2 mins
Author: Adapted from Linda Ziedrich's The Joy of Pickling
Recipe Type: Pickle, Side
Ingredients
Instructions
Notes
The most wonderful discovery while making these: okra is the PERFECT shape to pack into a mason jar for pickling. It doesn't fight you, just slides perfectly in next to its friends for its vinegar bath.
2.1.7

Celebrate the Season: Recipes that Scream of Spring

Greek Fava Dip from the Chef at Athina Suites, Santorini

Smoky Cocktail Recipes to Get You Fired Up for Fall

How to Cook Covfefe – 10 Best Tips